The State Secretariat for Education, Research and Innovation (SERI) is the federal government’s specialised agency for national and international matters concerning education, research and innovation policy. The SERI is responsible for the ETH domain (ETHZ, EPFL, Eawag, EMPA, PSI, WSL). The SERI is also partly responsible on the federal level for the cantonal universities, universities of applied sciences and various research centers. The SERI is part of the Federal Department of Economic Affairs, Education and Research.

Environment - May 10
State Secretary Martina Hirayama virtually attended the third Arctic Science Ministerial (ASM3) on May 8-9, 2021. At ASM3, science ministers and representatives of Arctic indigenous peoples' organizations came together to strengthen international cooperation in science and research to advance understanding of the Arctic region, and to support the role of science in policy and decision-making in the Arctic.
Politics - May 5

State Secretary Martina Hirayama participated by video conference on 4 May in the 2021 Ministerial Conference of COST (European Cooperation in Science and Technology). The main items on the agenda were a discussion on COST's role in the European Research Area and the adoption of a ministerial declaration.

The Dispatch on the Promotion of Education, Research and Innovation for the years 2021-2024 provides for a continuation of the bilateral cooperation programmes with non-European partner countries launched in 2008.

On 2 February, State Secretary Martina Hirayama attended the launch event for Horizon Europe, the 9th EU Framework Programme for Research and Innovation, via video conference. On 3 February, she will represent Switzerland at the informal meeting of ministers for research and innovation of the EU member states.

State Secretary for Education, Research and Innovation Martina Hirayama took part in the tenth meeting of the EU/ESA Space Council, which was held via video conference on 20 November 2020. The Council has adopted a joint resolution on key principles for the global space economy that will apply Europe-wide, and in its meeting underlined the importance of coordinated action between the European Space Agency (ESA), the EU, and the individual member states.

The swissnex Network is celebrating its 20th anniversary on 15 October 2020. Ever since the first location opened in the year 2000 in Boston, USA, swissnex has been connecting Switzerland with the rest of the world in the fields of education, research and innovation.

Every year since 1920, the Marcel Benoist Foundation has awarded the Swiss Science Prize. This year, the CHF 250,000 will be awarded in the field of humanities and social sciences. Nominations can be submitted from now until 15 April.

The space sector has been evolving for a number of years. In Switzerland also, space activities by stakeholders from science and industry have increased significantly. For this reason, the Federal Council announced on 18 December that the legal framework for these activities would be reviewed.

Meeting of the Swiss-EU Joint Committee for Research and Innovation

For the first time, the winners of the two prestigious Swiss science prizes, the Marcel Benoist Swiss Science Prize and the Latsis Prize, are being announced at the same time. In this anniversary year, the Marcel Benoist Swiss Science Prize, often referred to as the Swiss Nobel Prize, goes to Rudolf Aebersold (ETH Zurich/University of Zurich) for his pioneering work in the field of systems biology. 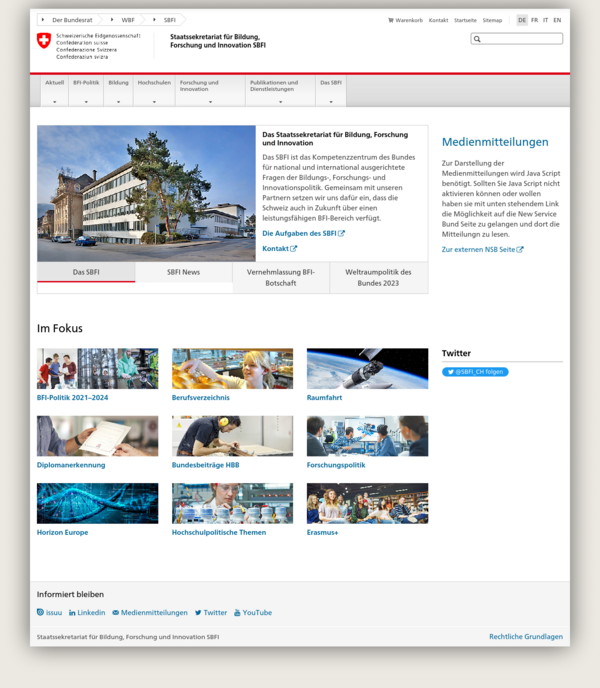