Switzerland has sent its first satellite into space 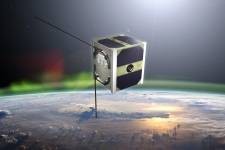 SwissCube, the first Swiss satellite in history—extremely small —has been successfully launched from the Sriharikota space station in India.

SwissCube has left Switzerland exactly two month ago. myScience.ch reported on its travel to India. Now, September 23th, the Swiss mini-satellite has gone into orbit today. The Indian launcher Polar Space Launch Vehicle took off at 8:22 a.m. - Swiss time. Twenty minutes later, the SwissCube was ejected from the nose cone of the rocket at an altitude of around 720 kilometers. At 9:37 a.m. the first ever signals sent from a Swiss satellite in space were picked up  from Stanford (California).

The researchers have been working very hard during the last three and a half years in order to send the concentrated cube of high technology into space. The SwissCube satellite is only 10 cubic centimeters in size and weighs a light 820 grams. It is equipped with a telescope to fulfill its mission of observing airglow. Airglow is a luminescent phenomenon in the planetary atmosphere caused by cosmic rays striking the upper atmosphere and chemiluminescence caused mainly by oxygen and nitrogen reacting with hydroxyl ions at heights of a few hundred kilometers. The satellite should allow students and researchers to better understand the phenomenon, especially during day and night cycles.   But the real goal of the SwissCube project is more pedagogic that atmospheric. Almost 200 students working closely with experienced researchers from the EPFL and several other technical schools and departments have collaborated on the project. From the conception, through the design, and finally the fabrication of the Swiss spatial sparkler—these young engineers have had the unique opportunity of participating in a space project from the first brainstorming sessions to the data collection once in orbit. This educational model focuses on cross-platform collaboration from A-Z, and apart from ensuring an exceptional finished product, prepares students for the work world in a way that sets it apart from similar attempts at other technical universities that often buy a prefabricated CubeSat kit. Furthermore, keeping to a strict budget helps students learn how to deal with monetary constraints once in the work world.

A low-cost and innovative satellite

Ruag Space, the Loterie romande, and the Swiss government contributed to the majority of the project’s financing with several Swiss enterprises contributing the rest. With the exception of a small involvement by the German company EADS-Astrium, the project was a wholly Swiss collaboration. In sum, the total cost of the project is 600,000 Swiss francs (400,000 Euro), including the launching; surprisingly little when compared to the high cost of most satellites, or even other student based projects.   The most difficult technical aspect is found in its extremely small size. Brutal variations of temperature (-50°C to over 70°C) as well as solar radiation and spatial vacuum subject the material to the toughest conditions. Vibrations caused by the launching do not allow for the smallest error in welding. For each component, engineers and students had to run a series of fastidious tests in order to ensure their durability.   The size and budget constraints have led to several innovations that may be used in future commercial satellites. For example, the engineers had to develop a more efficient system of copper contacts connecting the solar cells to the walls of the satellite to conduct electricity to the interior. By playing with the size, form, and spacing of these contacts, the team developed a new method which is both efficient and inexpensive.

The SwissCube mission should last between three months and one year. Traveling at over seven kilometers a second, the satellite will complete a full rotation of the earth every 99 minutes. Once or twice a day, the EPFL and the HES-SO in Fribourg, Switzerland, will receive radio transmission from the SwissCube—allowing for only 10 minutes to deliver complex information: telescope images, temperature measurements as well as scientific data about airglow. These data will be indispensable for preparing future Swiss satellites, for there will be, without a doubt, more than just one Swiss satellite orbiting the earth in the upcoming years.

f
Share
Like
Related Stories
Astronomy / Space Science
A dead star emits a unique mixture of radiations - 28.07
After a digital reboot, IGLUNA is still shooting for the moon - 24.07

Astrophysicists fill gaps in the history of the Universe - 20.07