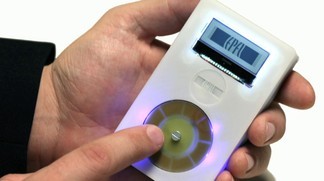 Researchers have invented a new generation of tactile surfaces with relief effects – users can feel actual raised keys under their fingers. This technology could have many applications, particularly in improving access to electronic media for the visually impaired.

Researchers have developed a way to control the texture of a screen so that the “feeling” of specific areas can be modified underneath a user’s fingertips. This technology, developed by EPFL’s Integrated Actuators Laboratory (LAI) in Neuchâtel, is being designed for smartphones, tablets, computers, and vending machines.

“We’re adding the sense of touch to tactile surfaces,” says Christophe Winter, a researcher in the LAI. “The term ‘touch screen’ that’s used to describe current technology is really a misnomer, because they only provide visual and auditory feedback.”

By adding another layer of information to devices, this invention will improve their usability and thus improve the user experience. For example, it could be used to enrich online texts, drawing the reader’s attention to certain elements on the page, or to make video games even more entertaining, by adding an additional sensory dimension. And for the visually impaired, it could truly open up access to smartphones and other electronic devices.

A layer of air

To obtain this relief effect, the scientists used a material that vibrates when a voltage is applied to it. These materials are described as “piezoelectric.” The material expands and then returns to its original shape very rapidly, all at the nanometer scale. “This movement generates micro-vibrations, whose intensity can be controlled mechanically,” explains LAI director Yves Perriard. These vibrations – whose amplitude is only about a micron, or one-hundredth of the thickness of a human hair – are themselves imperceptible to us. But they create a very thin layer of air between the surface and a user’s finger, giving him or her the feeling that there’s something raised underneath it.