A litmus test of fairness 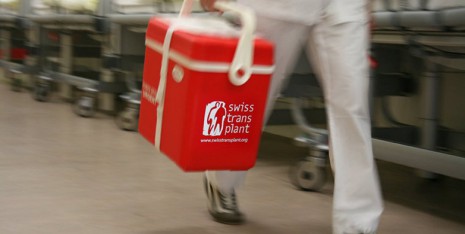 The fair allocation of donor organs to the needy, is a delicate ethical problem. (Image: Swisstransplant)

For example, lay people think that the sickest patients and those on waiting lists should be treated first, while ethicists - and to some degree medical professionals - tend to have a different set of priorities. This is the conclusion of a study by ETH researchers investigating the principles that apply to the fair allocation of scarce medical resources.

Donor organs are in very short supply. In Switzerland, for example, over 1,140 people are waiting to receive a new kidney. In the first half of 2016, however, only 77 patients were given a transplant. In an attempt to tackle this shortfall, the Federal Office of Public Health has just launched a public campaign to encourage citizens to become organ donors.

The shortage of critical medical resources inevitably raises the question: How should they be fairly allocated? Ethicists have developed criteria that provide a sort of moral compass to ensure the fairest possible allocation.

One theoretically possible tactic, for example, would be to give priority to the sickest patients (?sickest first?). Other potential approaches include: a lottery, first come - first served (working through a waiting list), giving priority to those patients likely to benefit most from treatment (prognosis), treating the youngest first, or even a combination of the three criteria age, prognosis and lottery.


Not everything that ethicists consider to be morally correct is viewed in the same way by lay people, however. The researchers Pius Krütli and Timo Smieszek from ETH and Public Health England, respectively, therefore decided to perform a ’reality check’ on the fairness criteria put forward by ethics experts. Their interdisciplinary study was recently published in the specialist journal PLOS One.

The researchers produced a comprehensive online questionnaire in order to determine how major stakeholders perceive ethical standards. This presented nine criteria for the fair allocation of scarce medical resources. The respondents were asked to apply these criteria to three hypothetical situations: donor transplants, the allocation of hospital beds during an epidemic and an artificial hip replacement to improve a patient’s quality of life. Respondents had to rate, on a scale from 1 to 7, how fair they thought the criteria were. The 1,267 respondents included lay people, general practitioners, medical students and other health professionals.


In all three hypothetical situations, lay people rated ’the sickest first? as the fairest criterion. Second priority was a waiting list, and the third was a patient’s medical prognosis - although the findings were not as clear-cut in the latter case. By contrast, medics are rather more discriminating. In the case of organ transplants, medical professionals consider prognosis to be the fairest criterion, followed by the sickest first and a combination of the three criteria age, prognosis and lottery - with more or less equal weight given to each one. Unlike lay people, medics also think that the patient’s age is more important than their position on the waiting list, which only ranks fifth in their list of priorities.

‘It’s fascinating to discover that lay people consider age to be an unfair criterion for an organ transplant, while both health professionals and ethicists think it is fair to give precedence to young people for this type of operation’, says Krütli. Favouring young over old patients is a form of discrimination that lay people apparently consider unfair.


Emphasis on prognosis and sickest first


General practitioners consider the patient’s prognosis to be the fairest criterion for allocating hospital beds in the event of a pandemic. For them, the second fairest allocation option should be to the sickest patients, and the third a combination of criteria. Both general practitioners and lay people think that the ’sickest first? principle is the fairest criterion for a hip replacement, representing a medical resource which improves the patient’s quality of life.

All respondents felt that the principle of ‘reciprocity’, i.e. rewarding those people who have provided services to society in the past, was an unfair criterion. Both doctors and lay people thought that a patient’s willingness to make a monetary contribution towards their care was not a fair principle. Lay people and the medical profession appear to be very divided when it comes to prioritising treatment on the basis of individual behaviour. Some think it’s a fair principle, but others disagree.

Medical students? ratings were similar to those of general practitioners, while the ratings of other health professionals resembled those of lay people.


Dichotomy between ethics and the real world


The ratings awarded by ethical specialists to the various fairness criteria are different again. There is a particularly big divide when it comes to the two criteria ‘sickest first? and waiting list. Certain ethicists, for example, believe a lottery to be a fair principle. Neither general practitioners nor lay people think this is a fair criterion - in any of the hypothetical situations presented to them. On top of that, not all health professionals and lay people share the opinion of some ethicists that the ’sickest first’ criterion is morally indefensible, as it does not take into consideration the future course of the illness.

‘The results of our survey are to some extent diametrically opposed to the current position of various ethicists’, comments Krütli. The large gap between the fairness ratings of ethical experts and the general public is in itself not particularly unusual. Ethicists believe that ethical principles cannot be derived from empirical data. ’On the other hand, ethicists cannot simply ignore these empirical findings, or else there is a risk of the gap between moral standards and reality widening to the point where ethical arguments are brushed aside as being divorced from reality’, stresses the ETH researcher.


Ethics not the only argument


This was also one of the motives for producing this study: ‘We want to reflect the position of ethicists and produce an empirical study to check how their proposed fairness criteria fit in with the real world.’ Their study clearly shows that the standards of ethicists differ - quite significantly in some cases - from prevalent social attitudes. ’Policymakers therefore have to consider whether to give equal weight to ethicists, health professionals and the general public when developing collective norms’, says Krütli. The problem of a fair allocation of scarce medical resources is difficult to resolve, as the solutions have to be practical. But we also need to remember that the allocation of scarce medical services needs to be democratically legitimised. In this respect, the aim of our study is to make a contribution to the public debate.’

The study is an interdisciplinary collaboration between researchers working with mathematical models and the Transdisciplinarity Lab (TdLab) of ETH Zurich’s Department of Environmental Systems Science. ‘This type of research is fairly unusual for ETH. It arises from the desire to share experiences and the willingness to explore beyond the boundaries of one’s own discipline’, says Krütli.