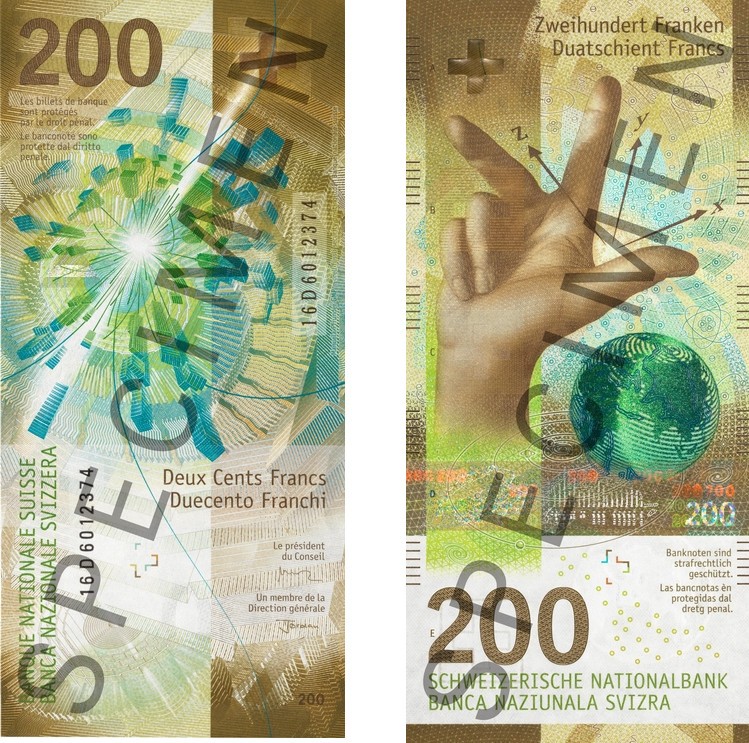 Following the 50, 20 and 10-franc notes, this is the fourth of six denominations in the new banknote series to be released. The current eighth-series banknotes will remain legal tender until further notice. The inspiration behind the new banknote series is ‘The many facets of Switzerland’. Each denomination depicts a typically Swiss characteristic, which is then illustrated graphically using a range of elements.

The 200-franc note focuses on Switzerland’s scientific expertise, as expressed by matter, the note’s key motif. Core design elements in the new series are the hand and the globe, which appear on every denomination. As with the banknotes currently in circulation, the ninth series consists of six denominations; the colour scheme, too, remains the same. Accordingly, the main colour of the new 200-franc note is brown. However, the format has been modified – the new notes are smaller and thus easier to handle. The innovative combination of complex security features and sophisticated design provides state-of-the-art anti-counterfeiting protection.

The new 200-franc note will be issued from 22 August 2018 at the SNB counters in Berne and Zurich, as well as at the SNB agencies located in the head offices of 14 cantonal banks. Commercial banks and Swiss Post will begin issuing the new banknotes shortly thereafter

Current events in the Middle East: a conversation with Gilles Kepel - 17.02
A bit more democracy? - 10.02
What makes financial analysts so optimistic about their forecasts? - 22.01
Wyss Center appoints George Kouvas as CTO - 20.01