New instrument for the search for life in space 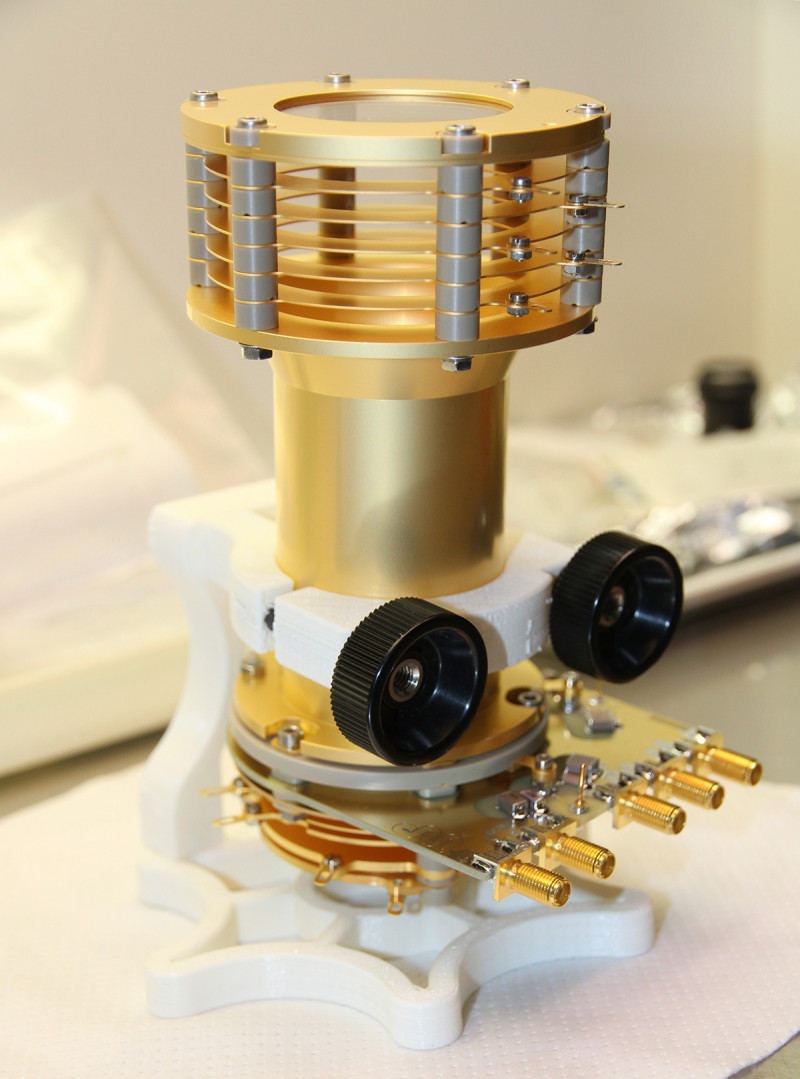 Researchers at the University of Bern have developed the highly sensitive instrument ORIGIN for future space missions, which can detect minute traces of life. Space agencies such as NASA have already expressed interest in testing ORIGIN for future missions. For example, the instrument could be used for missions to the icy moons Europa (Jupiter) and Enceladus (Saturn).

The question of whether life exists outside the Earth is one of the most fundamental questions of mankind. Future NASA missions aim, for example, to study the prominent icy moons of Jupiter and Saturn in situ, which may harbour life in the liquid oceans beneath a thick layer of ice. However, detecting traces of life outside the Earth is extremely challenging. Highly sensitive instruments are required to take measurements on site with the greatest possible autonomy and precision - millions of kilometres away from Earth, in other words, without the direct support of humans.

Now an international group of researchers led by Andreas Riedo and Niels Ligterink from the University of Bern has developed ORIGIN, a mass spectrometer that can detect and identify minute quantities of such traces of life. They describe the instrument in a recent article in the journal Nature Scientific Reports. Niels Ligterink from the Center for Space and Habitability (CSH) is the first author of the international study, and co-author Andreas Riedo from the Physics Institute of the University of Bern developed the instrument in the space research and planetology laboratories of the Physics Institute. Various international space consortia, above all NASA, have already expressed interest in testing ORIGIN for future missions.

Since the first Mars mission ’Viking’ in the 1970s, mankind has been trying to find traces of life on Mars using highly specialised instruments installed on landing platforms and rovers. Mars was Earth-like at a young age, had a dense atmosphere and also liquid water. As Niels Ligterink explains, Mars has lost its protective atmosphere over time: ’As a result, the surface of Mars is exposed to high levels of solar and cosmic radiation, which makes life on the surface impossible’. At the moment, Mars is being examined in detail by the NASA rover ’Curiosity’, but so far there are no concrete signs of life.

Since the discovery of the global oceans beneath kilometre-thick layers of ice on Jupiter’s moon Europa and Saturn’s moon Enceladus by the Cassini and Galileo missions, these two objects have moved closer to the centre of researchers’ search for extraterrestrial life. According to current knowledge, the oceans possess all the properties necessary not only for the emergence of life, but also represent environments in which life can exist in the longer term. NASA, for example, plans to land a mission on Jupiter’s moon Europa around 2030 and take measurements on site. The goal: to identify life. Co-author Peter Wurz from the Institute of Physics at the University of Bern says: ’Concepts developed specifically for Mars cannot, however, be easily applied to other objects in our solar system because they are very different. Novel instruments with higher sensitivity and simple and robust analytics have to be designed and applied’.

Unprecedented measurement sensitivity for the detection of life in space

ORIGIN is such a new instrument, which surpasses previous space instruments in its measurement sensitivity many times over. Various international space consortia have expressed great interest in the instrument for future missions. Andreas Riedo says: ’For example, NASA has invited us to test our instrument in the Arctic. The Arctic is an ideal test environment in view of a possible EUROPA LANDER mission that will be launched in 2025, which will allow us to demonstrate the advantages of ORIGIN’.

Amino acids are important components of our life as we know it on our earth. A simultaneous detection of certain amino acids on extraterrestrial surfaces, such as that of Europe, suggested the possibility of life. The measuring principle developed by the Bern researchers is simple. Niels Ligterink explains: ’Laser impulses are directed at the surface under investigation. This causes tiny amounts of material to dissolve, which is then examined by ORIGIN for its chemical composition in a second step’. Andreas Riedo adds: ’The convincing thing about our technology is that no complicated sample preparation is required which could possibly influence the result. This has been one of the biggest problems on Mars up to now’, says Riedo. The amino acids analysed with ORIGIN up to now have a specific chemical fingerprint which enables them to be identified directly. Niels Ligterink: ’To be honest, we did not expect to be able to determine amino acids during our first measurements.

The discovery of traces of past or present life on objects in our solar system beyond the Earth is of great importance for a better understanding of the presence of life in the universe and its origin. Andreas Riedo says: ’Our new measurement technique is a real improvement on the instruments currently used on space missions. Should we be on a future mission, we could possibly solve one of the most fundamental questions of mankind with ORIGIN: Is there life in space?’.