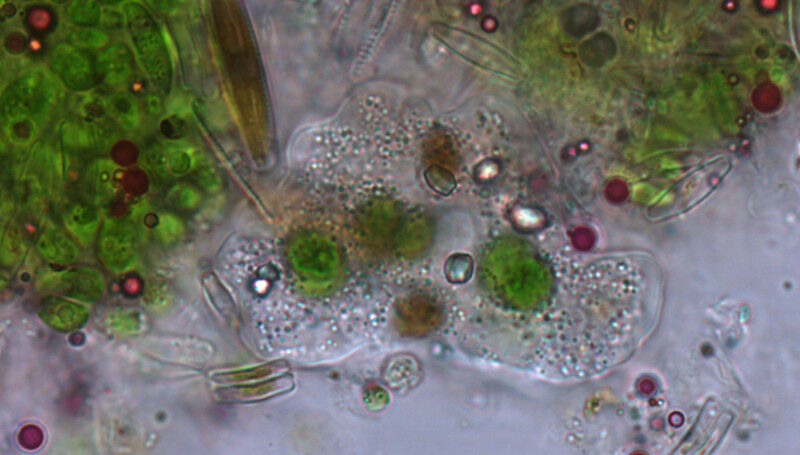 Close-up of biofilm with plastic particles

The smallest of all plastic particles have remained largely unexplored until now, because they could not be detected in the environment. Now researchers at Eawag show: Nanoplastics stick to slimy biofilms, which can for example be found on stones in streams or rivers. When freshwater snails feed on the slime, the nanoplastics are taken up.

Plastic is chemically stable - and therefore more persistent than many of us can imagine. Over time, plastic debris break down into smaller and smaller pieces, which - depending on their diameter - are called microor nanoplastic particles. While microplastics are fairly well investigated and have lately been detected not only in remote locations in the Arctic but also in human breast milk, for example, nanoplastics have remained largely unexplored. "We know practically nothing about nanoplastics in the environment because we cannot measure them with our current analytical methods," says Ahmed Tlili, an environmental toxicologist at Eawag.

Now, Tlili and his research group have published for the first time quantitative data on the accumulation and uptake of nanoplastic particles by organisms living in fresh waters. For their experiments, the researchers used special nanoplastics made of polystyrene, which were developed at ETH Zurich and contained the rare precious metal palladium as a tracer. This trick allowed Tlili and his colleagues to track precisely the entry of the tiny plastic particles into the food web.

When the particles enter the aquatic system, they sediment and reach the so-called periphyton. This is how the scientists call the slimy and sticky biofilm that forms on the surface of stones in streams and rivers. In their experiment, Tlili and colleagues grew the periphyton for five weeks on glass slides that were immerged in water taken from the Chriesbach - a stream nearby Eawag. As soon as the nanoplastic particles were added, they got trapped irreversibly in the biofilm. The nanoplastics did not seem to have strong effects on the microbial diversity and functions of periphyton, as the researchers report in their paper. The lipid content and the relative proportion of nutrients such as phosphorus or nitrogen in the periphyton did not change as well.

Then the researchers placed small freshwater snails on the slides colonised by the periphyton. These snails feed on the biofilm and if it contains nanoplastics, they will ingest them. However, they also quickly get rid of the nanoplastics through defecation, as Tlili and his colleagues discovered when they collected the snail faeces and measured the palladium contained in them. Despite their rapid clearance, ingestion of the nanoplastics had a strong effect on the snails: while those feeding on non-contaminated periphyton began to lay eggs after five days, the snails that fed on the biofilm to which the nanoplastics adhered did not reproduce at all until the end of the two-week experiments.

In their paper, Tlili’s team lists two possible mechanisms that could explain why the nanoplastics make the snails infertile. On the one hand, the nutritional value of the food could have deteriorated due to the nanoplastics. "Even if the total lipid content we measured remains the same, the snails may have had less high quality essential fatty acids available," Tlili explains. On the other hand, the nanoplastic particles perhaps triggered inflammation in the snail gut. This inflammation could have spread to the reproductive organs, which anatomically lie nearby the digestive tract. "Such effects have already been demonstrated with microplastics," says Tlili.

Basis for a better risk assessment

"We believe that our findings will contribute to lay the foundation for an improved evaluation of the risks posed by nanoplastics in fresh waters," Tlili’s team notes. Most people do not pay much attention to the slimy coating on stones in flowing waters. "Many are even disgusted by it," says Tlili. However, the high diversity of bacteria, fungi, algae and viruses that periphyton contains is very important for the ecological functioning of streams and rivers. "The periphyton is the foundation of the food chain and plays a crucial role in the nutrient cycle of flowing waters," writes Tlili’s team.

"The natural biofilm is very complex and its composition probably varies from a stream to another", says Tlili. In further work, Tlili’s research group has published a workflow to establish a standardised biofilm (see box). "A clearly defined and reproducible system can help understanding the mechanisms governing the structural dynamics and functional properties of these communities," says Tlili. His research group is currently using this synthetic periphyton to study how different types and sizes of plastic particles can impact the community at various growth stages. "If other research groups also use our synthetic periphyton in the future, the results from the different experiments will be easier to compare", Tlili says.

The sticky slime you encounter on the surface of stones in a stream or river bed harbors an impressive variety of tiny creatures that form a highly complex community in a very small space.

Just as a forest goes through several stages of development, in which pioneer plants dominate at first, but are later replaced by different tree species, the formation of the periphyton can also be divided into a sequence of several phases, as Tlili and his colleagues highlighted.
In order to obtain a reproducible and standardised periphyton, the surface is first colonised by a bacterium (of the species Sphingomonas elodea). The bacterium produces a mixture of substances that confer its slimy and sticky aspect to the biofilms. These substances form the extracellular matrix of the biofilm in which all other tiny organisms can then settle. In a second step, Tlili’s team divided the other microorganisms into three groups, which they added sequentially at intervals of a few days.

The first group includes the pioneer diatoms, followed by a second group with late coloniser diatoms that define and consolidate the three-dimensional structure of the biofilm, and finally the third group that contains the blue and green algae. It is only then - after thirty days of colonization - that the synthetic periphyton reaches its maturity. "At this point, we found that by following these steps, we obtained the same community composition and relative abundances of species across several experiments," says Tlili.

FMI science prizes - winners 2022 - 26.09
This site uses cookies and analysis tools to improve the usability of the site. More information. |