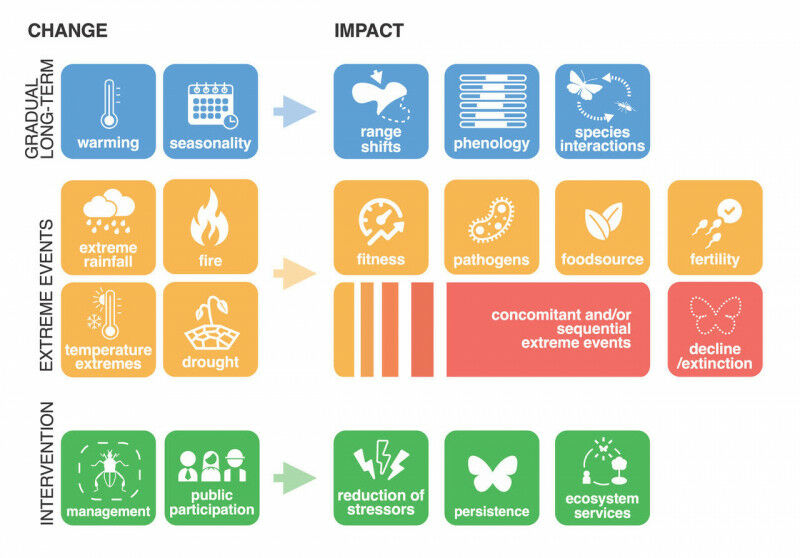 Climate change impacts on insects fall into two main categories: gradual long-term changes and extreme events that will increase in frequency and severity. Interventions include formal mitigation of change through policy and public approaches, which in turn help reduce impacts in a variety of ways. © Netherlands Institute of Ecology (NIOO-KNAW)

In a study, 70 researchers from 19 countries around the world call for measures to better understand and reduce the impact of climate change on insects. Otherwise, they say, the chance of a sustainable future with healthy ecosystems will be drastically reduced. The researchers also outline ways to help insects in a warming world.

In a new study, an international research team provides an overview of the role of climate change and climatic extremes in the decline of insect populations. Prof. Jeffrey Harvey of the Netherlands Institute of Ecology (NIOO-KNAW) and the Vrije Universiteit Amsterdam led the extensive work of the international research team. The study is part of the Scientists’ Warning series and has appeared in the journal Ecological Monographs. Prof. Madhav Thakur of the Institute of Ecology and Evolution (IEE) at the University of Bern is also involved. 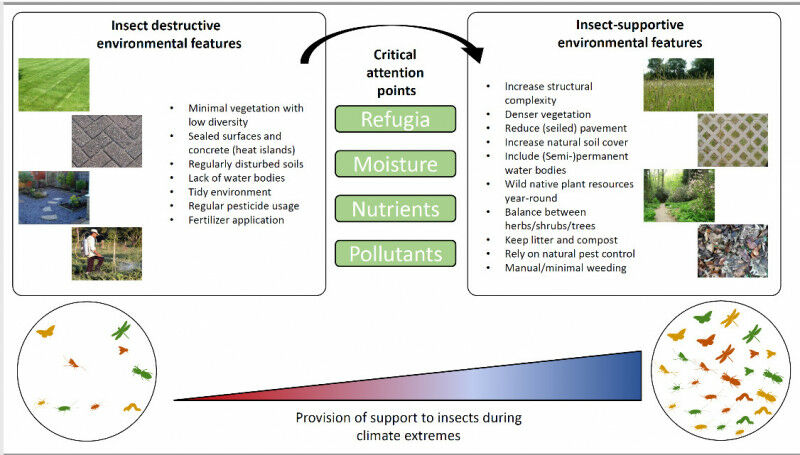 ’Insects play a critical role in so many ecosystems, but we’re about to lose at least some of them,’ Harvey explains. And this seems to be especially the case in regions with moderate temperatures. The authors stress that both longer-term events and short-term extremes are harming insects in several ways. The gradual increase in global surface temperature affects the physiology, behavior, phenology, distribution, and interactions among species. Harvey adds, ’But more and longer-lasting extreme events, such as hot and cold snaps, fires, droughts and floods, are also leaving their mark.’

As Madhav Thakur explains, evidence of the effects is accumulating: ’For example, fruit flies, butterflies, and mealybugs can survive heat waves, but males or females become sterile and thus cannot reproduce.’ Bumblebees in particular are very sensitive to heat, and climate change is now considered a major factor in the decline of several North American species.

A major concern related to the decline of insects in a warming world is that the plants that insects rely on for food and shelter are also affected by climate change. And if the number of insects declines, that in turn affects the food chain.

Pollination, pest control, nutrient cycling and decomposition of waste: Insects provide vital services that sustain human civilization and add billions of dollars to the global economy each year. They also make up the overwhelming majority of biodiversity. 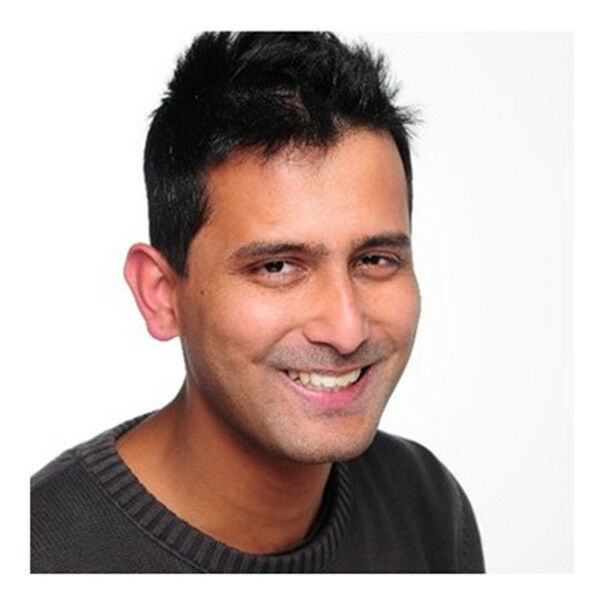 ’Over time, insects need to adjust their seasonal life cycles and distribution as it gets warmer,’ Harvey says. However, their ability to do so is hampered by other human-caused threats, such as habitat destruction and fragmentation and pesticide use. In addition, short-term heat waves and droughts can drastically damage insect populations, making them less able to adapt to gradual warming.

In the study, the scientists not only describe the challenges, but also discuss a number of measures that can help protect insects against global warming. Among other things, they call for tackling climate change on a large scale, reducing the use of pesticides and other chemicals, and suggesting that renaturalization programs should also consider micro-level ecosystems that focus on conserving small animals like insects. ’Insect mortality can only be mitigated through interdisciplinary approaches.’ And without considering the impact of climate change on our insects, it won’t be possible to develop an effective strategy to combat insect decline,’ Thakur says.