EPFL Innovation Park to expand with a focus on co-creation 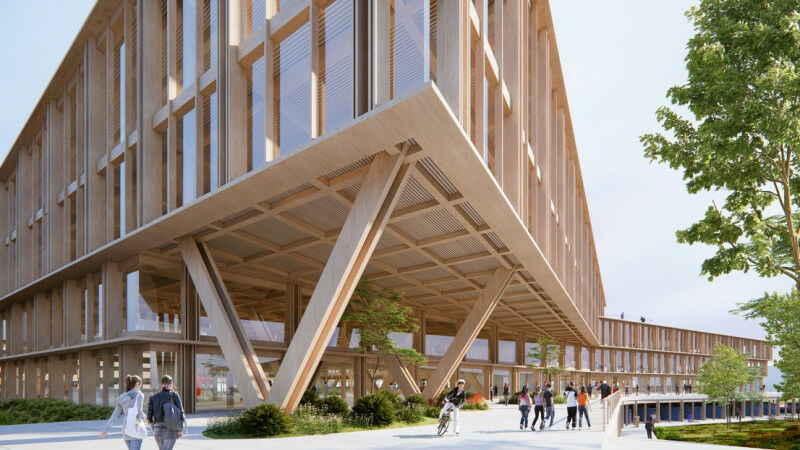 Computer image of the winners 3XN | GXN and Itten+Brechbühl. ©EPFL 2022

EPFL Innovation Park is turning 30 this year and poised to expand with a new site, called Ecotope, where startups, researchers and outside companies will be able to pool their resources in order to explore groundbreaking ideas. The Canton of Vaud is its main partner.

"Ecotope will be a major plus for our canton," says Philippe Leuba, the head of Vaud’s Department of the Economy, Innovation and Sports. "It will spur innovation - and thus job creation - make EPFL a more competitive school and bolster our economy in general." Some 30 years after Innovation Park opened its doors, plans are under way to double its capacity. "But it’s not just about adding surface area," says Ursula Oesterle, EPFL’s Vice President for Innovation and the person behind the initiative. "Today, businesses interested in innovation - whether startups or established companies - need a place where they can meet on a daily basis to share ideas. That’s the kind of vibrant, stimulating environment we intend to create with Ecotope.

The 30 or so spin-offs that come out of our labs every year are now struggling to find business premises, and the space allocated to large companies for pursuing innovative ideas is full. Innovation Park is already home to over 150 startups and 30 large companies employing over 2,600 people. In view of the need for more space, along with the Park’s appeal, the EPFL Innovation Park Foundation has teamed up with EPFL, the Canton of Vaud and the City of Ecublens to double the Park’s surface area, currently 55,000 m², within the next ten years.

...while laying a foundation for the future

But the objectives behind Ecotope run deeper. After listening to researchers, startups and other businesses describe the challenges they face, Oesterle and her team wanted to provide more than just additional office space. "We heard a lot of entrepreneurs talk about their companies in terms of its mission, impact and role in society," she says. "Beyond the expected financial returns, more and more entrepreneurs, small business owners and corporate executives are looking harder at how their enterprises can help build a better future - especially in the current climate of challenges and uncertainty."

Ecotope is intended to be an ecosystem in its own right, where policymakers, researchers, investors, executives, entrepreneurs, students and citizens can come together for open dialogue and debate. The project specifications given to the architects for the project were therefore demanding. Not only must the new site fit in seamlessly with its natural surroundings, it should also provide occupants with a peaceful work environment along with common spaces and "village square" areas for brainstorming and ideation. It should also encourage people from different backgrounds to pool their strengths in the search for innovative solutions. Much of the new project is about promoting this kind of interaction as well as informal conversation.

In the first phase of construction work for the new site, slated to begin in 2023, some 25,000 m² of offices, labs and collaborative spaces will be built by an architecture firm that was selected in early June through an RFP. Ecotope will be located just one kilometer away from Innovation Park, which is a key part of the project. A clean transportation system will also be put in place, with the support of the City of Ecublens, so that people can move easily between the two R&D hubs.

Ecotope is intended to serve as a hotbed of innovation and to support EPFL’s strategy of addressing key societal challenges - like sustainability, the environment, aging, artificial intelligence and healthcare - through a cross-disciplinary approach. The scope of these challenges is so vast that solutions can only be found by drawing on many different fields.

These challenges are also top priorities for public officials. "EPFL’s strategic focus areas, and the industries in which the startups coming out of them operate, are completely in line with our own priorities," says Leuba. "With Ecotope, our canton has a unique opportunity to create a forum where businesses, engineers, scientists and society at large can unite their efforts in developing responses to the main economic and societal hurdles before us."

EPFL President Martin Vetterli believes Innovation Park is central to those efforts. "Our School was a pioneer 30 years ago when we brought university researchers and businesses physically together in a single location and forged close ties with the Swiss economy and society," he says. "We began supporting startups very early on, and this has turned out to be a winning strategy. Personally, when I’m called on to advise young researchers, I encourage them to pursue careers in industry just as much as in academia. We can make a difference in both areas. Ecotope marks an essential step forward along this path, and will help ensure EPFL remains a key player in the local economy and an important driver of our dynamic region."

Contributing to the success of the Lake Geneva area

Ecotope will also help EPFL, and the Lake Geneva area more broadly, anchor its leadership position in innovation and new business creation. The new site will uphold the area’s long-standing tradition of close collaboration among partner organizations, such as the University of Lausanne, the Lausanne University of Art and Design (ECAL), the School of Business and Engineering (HEIG), the Institute for Management Development (IMD), La Source, and the Ecole hôtelière de Lausanne (EHL). This approach has proven its worth: between 2013 and 2021, for example, Lake Geneva businesses raised some CHF 3.6 billion in venture capital, or 30% of the Swiss total (the Zurich area accounted for 36%). And the number of startups spun off from EPFL jumped from 5 in 2005 to 33 last year. These young firms raised a total CHF 25 million in funding in 2005 and CHF 779 million in 2021.

President Ignazio Cassis to visit Japan: meetings to focus on economic and scientific cooperation - 14.04
This site uses cookies and analysis tools to improve the usability of the site. More information. |