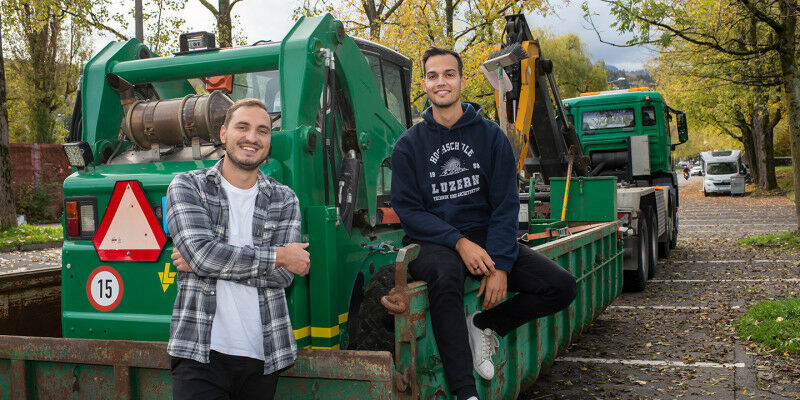 Construction machinery is expensive. For many companies, it is hardly worthwhile to purchase every piece of equipment anew. Two start-up founders from Lucerne have developed a solution so that construction companies don’t have to own everything themselves.

The idea was born at the ping-pong table: Fatmir Shoshi told his counterpart Rui Marques between two rallies that he wanted to clean his patio thoroughly, but didn’t have a squeegee at hand. Marques said how practical it would be to be able to borrow such a high-pressure cleaner for this one-off job. The friends, who both studied at the Lucerne University of Applied Sciences and Arts at the Department of Engineering & Architecture in Horw, took their idea a step further: What if not only private individuals, but also companies no longer had to purchase all the special machines themselves, but shared them with others? They could keep their expenses low, would need less storage space, could outsource maintenance, and would even operate sustainably. After all, the production of a machine generates a lot of gray energy.

HSLU helped with the market study

This thought process, which the two began almost three years ago, never left them. Shoshi has a degree in mechanical engineering and Marques is a graduate of Energy and Environmental Systems Engineering. Due to Corona, they had plenty of free time to work out their business idea. "We complement each other well and motivate each other," Shoshi explains.

But not only did the chemistry between them have to be right, but also the framework conditions for their business idea. A market study was to provide the necessary basis for this. However, commissioning such a study is a large financial outlay for young entrepreneurs. On the off chance, Shoshi therefore approached the HSLU for cooperation and found an open ear at the Department of Economics: The preparation of a market study for the two former students was integrated into the classes. "This study helped us a lot," says Shoshi. Among other things, the study led them to decide on a business-to-business business model and to focus on the construction industry for the time being with the planned platform. "This industry often requires large machines that are expensive to procure, transport and maintain," Shoshi said. Thanks to the new platform, he said, a construction company has the option of temporarily borrowing machines for a job and then returning them. The idea of short distances plays an important role here: "If, for example, a Lucerne company is working on a construction site in Chur, it can borrow machines in Graubünden and does not have to transport its own," explains Shoshi.

Aiming for a wide reach

In July 2021, the two from the city of Lucerne founded their company faroo, an amalgamation of their two first names. And in August 2022, they launched the platform of the same name. While Marques focuses on marketing and programming the online platform, Shoshi is primarily involved in customer acquisition and support. Before the rental business can get off the ground, there must be enough machines to rent. The goal is to be able to offer 400 machines by the end of the year. "Right now, we’re focusing on finding rental companies. From the start of the construction season next year, it should then be possible to rent excavators, trenchers and scarifiers," says Shoshi.

A partnership with the Swiss Association of Master Builders is intended to help publicize the offering in the industry and attract advertisers. Shoshi and Marques are paying attention to the regional distribution of the rental offers in order to achieve the widest possible reach. Which machines are available depends on the advertisers.

Shoshi, 32, and Marques, 27, learned much of what they needed to build their startup through research and learning by doing.

At present, for example, the company is in contact with insurance companies to clarify the legal situation regarding the rental business with construction machinery. "New questions are always coming up, and we are open to learning more," says Marques.

To this end, they are seeking targeted support. For example, they took part in the Zünder Accelerator program led by ITZ Innovationstransfer Zentralschweiz. As part of this program, start-ups are accompanied for nine to twelve months and receive coaching, among other things. The collaboration with the HSLU is not over yet either. At the moment, students from the Department of Economics are working on another market study to clarify the potential for a possible expansion of the business field to the photo and film industry. The two young entrepreneurs have an online portal in mind that would be of interest to other sectors of the economy, such as the event and transportation industries.

Conflicting Motives Govern Sense of Fairness - 05.12
This site uses cookies and analysis tools to improve the usability of the site. More information. |