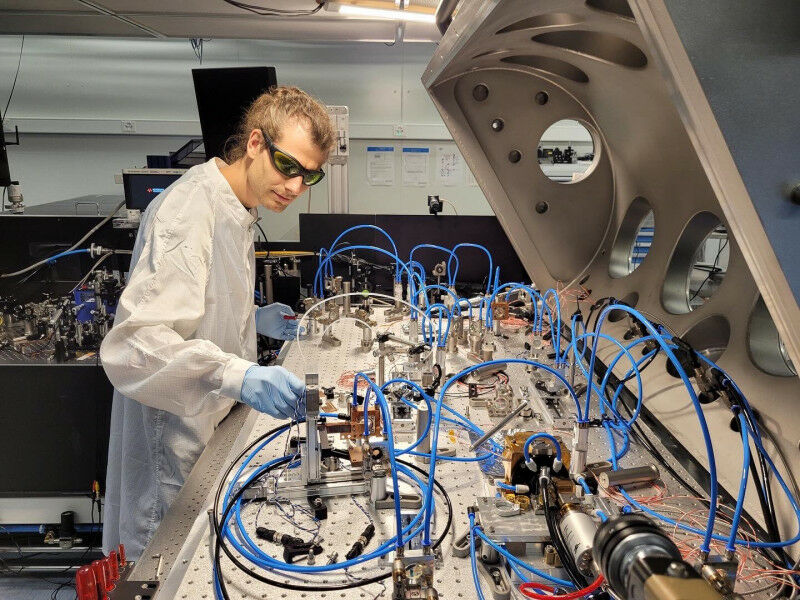 The Time-Frequency Laboratory (LTF) of the University of Neuchâtel has just achieved a new performance in the field of ultrafast lasers. The device transforms an infrared laser into a stroboscope, each pulse lasting only 27 femtoseconds (fs), i.e. 27 billionths of a microsecond, but with a power comparable to that of a nuclear power plant! This feat is at the heart of a doctoral thesis that has just been defended at the UniNE.

The LTF is not new to the field. Already in 2018, one of its PhD students, Clément Paradis, achieved record performance with an ultrafast laser. Four years later, the work accomplished in a project* supported by the Swiss National Science Foundation (SNSF) allows for a 25-fold increase in the power of the beam inside the laser cavity, from 80 megawatts to 2 gigawatts. The power equivalent to that of a nuclear power plant is compressed into these pulses, which are invisible to the naked eye," says Jakub Drs, who defended his doctoral thesis at the LTF earlier this month.

It is important to note that this very high power occurs only for an extremely short time. To illustrate the brevity of this impulse, we can say that a duration of one femtosecond compared to one second is equivalent to comparing the diameter of a hair to the distance Earth-Moon (384’400 km).

During this time, the intensity of the laser becomes so great that it allows the electrons to be accelerated by the electric field of the laser light. Thanks to these accelerated electrons," explains Jakub Drs, "we can transform the wavelength of our laser to the extreme ultraviolet. This type of radiation is normally only available in large-scale facilities involving entire buildings, such as synchrotrons or free electron lasers (one of each exists in Switzerland). ’ And here, we produce it on a lab bench. ’

Our laser pulse device is unique," continues the researcher. Basically, we worked upstream of the signal production, in a part called the resonator or cavity of the laser, and not after the output of the beam as some of our competitors do. Of course, this is still an experimental device that takes up the space of a large table, but it allows us to achieve remarkable performance. ’

This achievement has not gone unnoticed by the scientific community. Jakub Drs received the Best Student Paper Award at the European Optical Society Annual Meeting 2021 in Rome, while another LTF PhD student working on the same project, Julian Fischer, won three similar awards at prestigious international conferences between 2021 and 2022. All these awards demonstrate that the work carried out at UniNE is the state of the art in the field of ultrafast lasers," said Professor Fischer.said a delighted Professor Thomas Südmeyer, director of the LTF, during the laudatio of Jakub Drs’ defense, whose thesis he supervised.

The applications of ultrafast lasers are vast, ranging from fine cutting of metals to imaging. The frequency spectrum in which the LTF laser operates is the extreme ultraviolet: this makes it a less invasive imaging tool than X-rays and suitable for revealing the crystal structure of certain materials. This is particularly useful for the design of semiconductors, key elements of everyday electronic objects.

By further reducing the duration of the pulses, we can imagine one day visualizing live the energy transition of a single electron when it changes electronic state. This transition lasts only a few tens of attoseconds (the attosecond is 1000 times shorter than the femtosecond, editor’s note) and has only begun to be observed in recent years thanks to the development of attosecond science. This is an incredible experimental step in fundamental physics. We also hope to carry out this type of measurement in our laboratory in Neuchâtel in the next few years’, Jakub Drs. But this is still music for the future.

Related Stories
Event
Martina Caroni elected to the Marcel Benoist Foundation Board of Trustees - 25.01
Looking back - How ETH has shaped my life - 22.12.2022
This site uses cookies and analysis tools to improve the usability of the site. More information. |