Origin of the turtle shell lies in digging 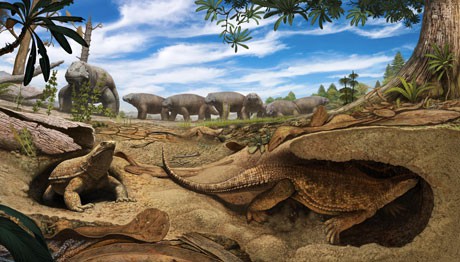 Life reconstruction of the early proto-turtle Eunotosaurus (foreground) burrowing into the sediments of a dried-out lake to escape the harsh environmental conditions in South Africa 260 million years ago (Illustration: Andrey Atuchin).

In today’s turtles the shell has a key protective function. The animals can withdraw into it and protect themselves against predators. No other group of vertebrates has modified its physique to such an extent to develop an impenetrable protective structure.

“For a long time, paleontologists and developmental biologists puzzled over the origin of the tortoise shell,” explains Torsten Scheyer, a paleontologist at the University of Zurich. Based on fossils and observations of the development of present-day turtle shells, the first more significant changes towards a shell are known to have been the broadening of the ribs. The ribs are required to support the body while moving and play a key role in ventilating the lungs. Heavily broadened ribs result in a stiffened, less mobile torso, which shortens the length of an animal’s steps; it moves more slowly and its breathing is affected. “The importance of the ribs for both mobility and respiration is most probably the reason why ribs barely differ in form,” says Tyler Lyson from Denver Museum of Nature and Science. The ribs of whales, snakes, dinosaurs, humans and virtually all other animals therefore look relatively similar. Turtles, however, are an exception as their ribs have been modified substantially to form the majority of the shell.

New insights thanks to fossil finds

Researchers made a major breakthrough thanks to the discovery of several examples of the oldest, 260-million-year-old proto-turtle Eunotosaurus africanus, which came from the Karoo Basin in South Africa and only had a partially developed shell. Several of these examples were unearthed by the co-authors of this study Roger Smith and Bruce Rubidge from Witwatersrand University in Johannesburg. The most important specimen was discovered by a local eight-year-old boy called Kobus Snyman on his father’s farm.

This roughly 15-centimeter-long specimen comprises a well-preserved skeleton, including all four feet. The considerably broadened, spade-shaped fingers are typical of animals that dig with their front legs. The rigid ribcage with broadened ribs, a kind of proto-shell, served the animal as a support for the burrowing front legs. The researchers therefore conclude that the earliest beginnings of the turtle shell did not serve a protective function. “The proto-shell enabled the animals to burrow into the ground and brave South Africa’s inhospitable environmental conditions in subterranean dens,” explains Scheyer.