Towards a therapy against prostate cancer metastasis 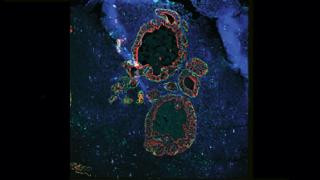 Lymph node metastasis due to CDCP1 overexpression in the prostate ( IOR)

An international group of researchers, led by the Institute of Oncology Research (IOR, affiliated to USI), has discovered a mechanism to recognise the cancer cells responsible for prostate cancer and selectively eliminate them. The study was published on April 6 by the Journal of Clinical Investigation (JCI).

Prostate cancer is one of the most frequent causes of mortality among adult men, especially in the Western world. The most commonly used therapy is surgical castration or pharmacology, which proves effective initially but, after a certain period of time, the tumor cells begin to grow more aggressively due to the development of resistance mechanisms, in most cases accompanied by the development of metastases. For years researchers have been investigating the molecular, genetic and immune mechanisms that could lead to this tumor regrowth, but how some cancer cells manage to escape therapy and begin to proliferate again, also leading to the development of metastases, remains an unknown mechanism.

The study, conducted by Andrea Alimonti with researchers Mariantonietta D’Ambrosio and Abdullah Alajati at IOR (USI), was carried out starting from the analysis of about 1000 prostate cancer samples of patients from all over Switzerland. From the histo-pathological analysis (i.e. the analysis in the laboratory, using sophisticated methods, of the cancer cells taken from the patients) of these samples, the researchers noted that the levels of a membrane protein known as CDCP1 had increased especially in the advanced stages of the tumour, i.e. when the tumour developed resistance to anti-androgenic therapy and became metastatic. CDCP1 is an excellent therapeutic target since it is a protein expressed on cell membranes.

For this reason Alimonti’s group, in collaboration with the University of Padova, decided to produce an immuno-liposome, consisting of a liposome containing a chemotherapeutic compound and the portion of an antibody capable of binding CDCP1 (iposomes are tiny lipid vesicles, in the order of nanometres, i.e. millionths of a millimetre, which can be filled with a drug and "built" so as to reach the desired target); in this way the immuno-liposome is able to recognize tumor cells and kill them selectively. "The next step will now be to move on to the clinical development of the compound", explains Prof Alimonti. Many companies have realised that this target could be crucial to block the progression of prostate cancer and have developed antibodies against CDCP1 that could be tested in the clinic within a reasonable time (2 to 3 years maximum).

Details of the study: www.jci.org/articles/view/131133