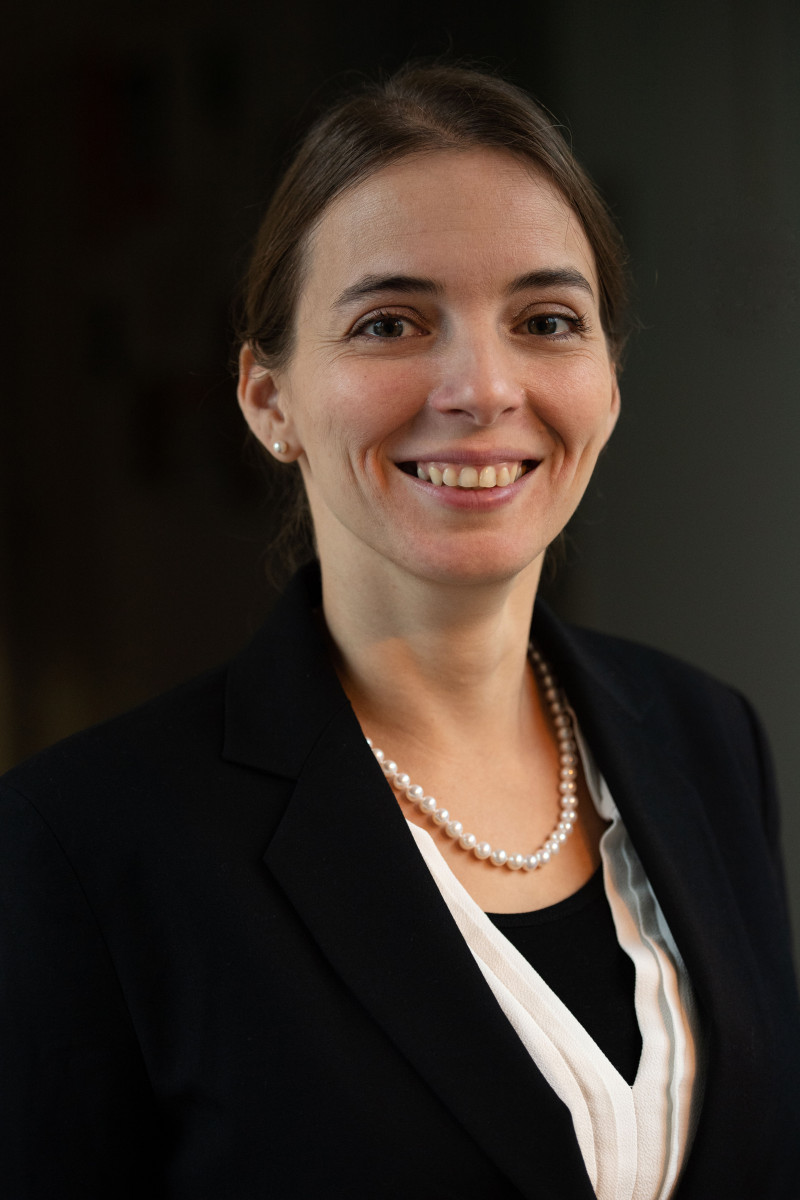 Four researchers from the University of Bern will receive the coveted Starting Grants from the European Research Council (ERC). Plant researcher Christelle Robert wants to use the grant to understand the interactions between plants and the natural enemies of pests, while economist Christoph Oberlack is investigating new ways of establishing environmental justice. Pathophysiologist Ziad Al Nabhani is investigating the influence of early childhood nutrition on the immune system, and chemist TomÃ¡s Solomek is exploring new ways to better understand and use a material of the future.

Yesterday, the European Research Council (ERC) announced the names of researchers who will receive the coveted Starting Grants. The Starting Grants are part of "Horizon 2020", the European Union’s framework programme for research and innovation. Four researchers from the University of Bern are among those who will benefit from the grants. They will each receive 1.5 million euros.

The achievement in this competitive European tendering process is, on the one hand, proof that the researchers from Bern are outstanding, says Daniel Candinas, Vice-Rector for Research at the University of Bern: "On the other hand, it shows how projects are being funded in areas that have long been strategically prioritized topics - and that are prevailing and relevant in Europe". In addition, Candinas emphasizes that it is important for Swiss researchers to network in a European setting.

IInteractions between plants, herbivores and the natural enemies of herbivores, so-called tritrophic interactions, are important determinants of ecological processes and crop yields. Interestingly, new research shows that plants can perceive the presence of predators and react to them. However, the mechanisms and specificity of these responses are not well understood, and how they influence tritrophic interactions in nature is unknown.

The project PRENEMA, by Christelle Robert of the Institute of Plant Science (IPS), aims at characterizing plant responses to the natural enemies of herbivores, as hitherto overlooked mechanisms governing tritrophic interactions. To this end, PRENEMA includes an interdisciplinary approach to the tritrophic model system, which is relevant both ecologically and agriculturally. The project involves maize and its wild ancestor teosinte, the root herbivore Diabrotica balteata, and the entomopathogenic nematode Heterorhabditis bacteriophora.

PRENEMA will develop a new and innovative system to extract samples of chemical substances from the roots, and study changes in the metabolism of the plant after exposure to the nematodes. Robert and her team will also look for molecular patterns that are responsible for triggering plant responses. The ecological consequences of the plant responses for plants, herbivores and entomopathogenic nematodes will then be measured in the the field. “The knowledge and technology generated by PRENEMA will help to integrate a new infochemical pathway into tritrophic interactions and will inform potential new approaches to improve natural pest control’, says Robert. The ERC Starting Grant offers her and her team the exciting opportunity to investigate a new ecological phenomenon: "The Institute of Plant Sciences at the University of Bern, with its interdisciplinary profile, is the perfect setting for my research’, she adds. Robert is also grateful for the University of Bern’s support and close supervision in applying for the ERC Starting Grant: "The University provides amazing support especially to early career researchers and women’.

Weaning and intestinal microbiota: a key time for immunity

In newborn infants, gut microbiota is first conditioned by breast milk components. When solid food is introduced, intestinal microbiota develop and bacteria proliferate. The vast expansion of microbiota during the weaning of neonates from breast milk generates an immune memory which is important in preventing the development of allergies and chronic inflammatory diseases later in life. Excessive exposure to antibiotics or lipid rich diets at weaning deregulate the immune system and increase the susceptibility of developing inflammatory pathologies in adulthood. “However, it remains obscure how the nutrition and microbiota orchestrate the immune system at this critical weaning period in the development of neonates, and how the perturbation of their relationships increase the susceptibility to develop inflammatory pathologies in adulthood’, says Ziad Al Nabhani of the Department of BioMedical Research (DBMR).

In his project called "WePredict", he and his team aim to determine how microbial and nutritional signatures at weaning predict the susceptibility to develop chronic inflammatory pathologies such as allergy, obesity and inflammatory bowel diseases. “The long-term goal is to prevent the development of inflammatory pathologies by providing beneficial bacteria or bacterial products to newborns, and to break pathological memory later in life using microbiota-based therapy’, explains Al Nabhani.

For the project, Al Nabhani and his team will use so-called high-throughput sequencing machinelearning algorithms and special mouse models. They will next identify the immune cells that carry memory from weaning until adulthood using transgenic mice. Studying epigenetic and antibody repertoires will allow them to determine the nature of this memory using high-throughput sequencing. “The exceptional interactive network between different departments, such as the Department for BioMedical Research and the University Clinic for Visceral Surgery and Medicine, will prompt the exchange information on the eventual data of our animal models and the applicability of biomarkers to children cohorts", says Al Nabhani. He adds: "ERC Starting Grant funding will allow me to set up a research group focus on all aspects of weaning and long-term immunity".

A compass for environmental justice

Unprecedented concentration in agri-food value chains is reinforcing global inequality. Waves of land grabbing threaten the livelihoods of millions. Reshaping the effects of agricultural investment, land use, and trade on human well-being is thus an urgent challenge. Joint strategies have been developed to counter this, such as certification systems such as "FairTrade", initiatives by inclusive companies, or solidarity-based economic initiatives. Inclusive businesses are partnerships between agri-businesses and small farmers that aim to equitably integrate the latter into commercial value chains. Examples of IBs include joint ventures and so-called outgrower schemes. Solidarity-based economic initiatives are self-organized, needs-based initiatives of communities of agricultural producers and food consumers. Examples of SEs include direct trade and community-supported agriculture. “However, empirical studies show that even these three strategies do not generally increase the well-being of the affected population’, says Christoph Oberlack of the Centre for Development and Environment (CDE). Moreover, these are primarily strategies from private-sector organizations, with limited direct involvement of state actors.

Starting from the thesis that environmental justice is a necessary prerequisite for human well-being, Christoph Oberlack and his team systematically investigate and compare the three strategies with regard to their instruments, their impact on human well-being and the institutional anchoring of environmental justice. The project, "COMPASS", aims to develop a compass based on the cocoa and coffee sectors of Peru and Switzerland, which shows how value chains can be organized fairly while taking environmental justice into account. "It also promotes a better understanding of how public policies, property rights and the structures of value chains influence these dynamics," says Oberlack. In his project, team members in Peru will among other things, use interviews with coffee and cocoa farmers to determine the impact of the three strategies on their well-being.

Carbon nanotubes (so-called CNTs) are microscopically small tubular structures of carbon. They have promised a revolution in a number of fields, such as organic electronics. Here, promise falters a bit behind expectation because it is not easy to fully control the synthesis of CNTs. For example, CNTs can differ in length, diameter, and the fine structure of their edges. These aspects, however, control their properties. At the same time, CNTs are not very soluble, and separation of individual CNTs from a mixture of different tubes is a daunting task. It was believed that molecular nanocarbons could serve as templates, i.e., molecular seeds from which a CNT with specific properties could be synthesized in stepwise manner. This hypothesis met with only partial success but it has appeared that the curved nature of the hoop-like molecular nanocarbons endow them with quite unusual and useful properties. “Small curved molecular nanocarbons are a game changer in organic materials and new exciting applications in bioimaging, sensing, catalysis, and organic electronics have been rapidly emerging in the past two years,’ adds Tomás Solomek of the Department of Chemistry and Biochemistry (DCB).

?olomek wants to study even more complex carbon nanostructures, such as double-walled CNTs that form when a tube with a smaller diameter is inserted into one with a larger diameter, or carbon nanoscrolls that can be obtained by rolling up planar graphene the same way as one would roll a sheet of paper. His project, TOPOCLIP, will do pioneering work and produce responsive nanocarbons that can alter shape with an external stimulus, such as light.

Solomek and his team believe that, in collaboration with other groups at the University of Bern, they will explore the role that molecular topology can play in future applications of nanoand biotechnology. “I am excited that I am joining the University of Bern’, says Solomek, who is currently at the University of Basel. “The Department of Chemistry and Biochemistry is an attractive location for excellent researchers from around the world and I am very much looking forward to branching out in related research fields at the department and developing new and innovative ideas together with my future colleagues.’

CChristelle Robert is project leader for Chemical Ecology at the Institute of Plant Science. She has pioneered underground chemical ecology by unravelling novel strategies that herbivores use to exploit their host plant, and the impact on the natural enemies of the pests. Her line of research now focuses on the impact of predators in tritrophic interactions. She has been awarded several prizes, including the Sustainable Development Award for her thesis at the University of Neuchâtel. She actively contributes to the scientific community through editing and reviewing activities, and was elected councilor of the International Society of Chemical Ecology in 2019.

ZZiad Al Nabhani is interested in studying the relationship between gut microbiota and the immune system and how its disruption leads to chronic inflammatory diseases. He did his PhD at the French Institute of Health and Medical Research (INSERM) and obtained his doctorate in 2013 in Physiology & Physiopathology from the University of Paris Diderot, France. He performed his postdoctoral studies in Microbiology at the National Institute of Agricultural Research (2013-2014) and in Immunology at Pasteur Institute (2014-2020) in Paris. In April 2020, he joined the Department for BioMedical Research (DBMR) at the University of Bern as Senior Scientist. He is the recipient of various fellowships and young investigator awards, including from the Janssen Horizon Fund and Association François Aupetit.

Christoph Oberlack is Head of the research cluster Sustainability Governance at the Centre for Development and Environment (CDE), and research associate at the Institute of Geography at the University of Bern. He holds a PhD in economics from the University of Freiburg im Breisgau and is, among other things, co-chair of the research group "Archetype Analysis in Sustainability and Land Governance Research" of the Global Land Programme of Future Earth. His research focuses on sustainability governance. He has been awarded several prizes, including the Oran Young Prize 2018.

Since 2017, Tomás Solomek is an SNSF Ambizione group leader in the Department of Chemistry at the University of Basel. He will become an Assistant Professor in the Department of Chemistry and Biochemistry at the University of Bern in early 2021. Tomás Solomek’s research in the areas of physical-organic chemistry and organic photochemistry explores the effect of topology and topography on the properties of organic molecules and materials. In doing so, his group aims to discover new synergies in topics related to solar energy conversion and porosity of materials. Tomás Solomek has received a number of awards for his research, such as the Dimitri. N. Chorafas Award, the Experientia Fellowship, and others.

The European Research Council (ERC) was set up by the European Union in 2007 and is the first pan-European funding agency for leading-edge basic research. Its mission and aim is to promote investigator-driven research by Europe’s best researchers. The Starting Grants are designed to support Europe’s most talented young researchers in building their own teams and conducting groundbreaking research across all disciplines.