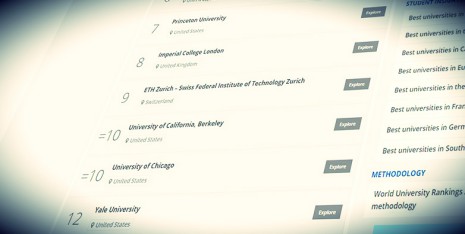 In the three major rankings - here a screenshot from this year’s THE ranking - ETH Zurich is holding its rank in the top group. (Screenshot: ETH Zurich)

The university ranking list season draws to a close with the release of the THE Ranking. ETH Zurich has maintained its ninth place from last year. Time to take stock. Good news from the UK: ETH Zurich has distinguished itself in this year’s THE Ranking , maintaining last year’s ninth place. The University of Oxford bumped Caltech off first place, becoming the first British university to top the list since its inception. ETH’s best results came in the ‘research’ and ’international outlook’ indicators (seventh place); its lowest in the indicator for ’industry income? (147th place compared to last year’s 87th). It gained ground in ‘citations’, but its score in the reputation section of the ‘teaching’ indicator fell. However, as the other four sections of the ’teaching’ indicator have developed positively, ETH improved its ranking in this area from 20th to 17th place.

‘ETH’s high ranking raises our international profile and confirms that we can compete with top universities worldwide,’ comments ETH President Lino Guzzella. Caution is required, however, in some developments, such as the faculty-student ratio. ETH Zurich requires a positive working environment in order to build on its previous successes. It is essential to maintain openness, autonomy and dependable financing, says the ETH President. ‘Parliament’s recent decision to increase funds for education, research and innovation is an encouraging sign,’ says Guzzella. ’Now the government must find a solution that allows Switzerland’s higher education institutions to continue to participate in the Horizon 2020 European research framework programme.’

ETH Zurich’s ranking in two other key lists, the Shanghai Ranking (ARWU Ranking) and the QS Ranking, rose by one place in each case. It now stands at number 19 on the Shanghai list and number eight on the QS list - its best results since these rankings were established. ETH’s performance in all indicators in the QS Rankings remained stable or suffered only minor declines, such as in academic reputation and number of citations. The faculty-student ratio was the only area that saw a real loss of ground. ETH’s position in Shanghai University’s ARWU Ranking has remained stable for years. It is currently ranked 19th up from 20th place last year. This ranking is heavily weighted towards Nobel prizes awarded to current and former members of the university, and ETH is rated ninth in the mathematics and science division. However, it is difficult to compare the various ranking lists, since each organisation uses different methods and criteria, weighted differently, in order to produce a ranking of global universities.