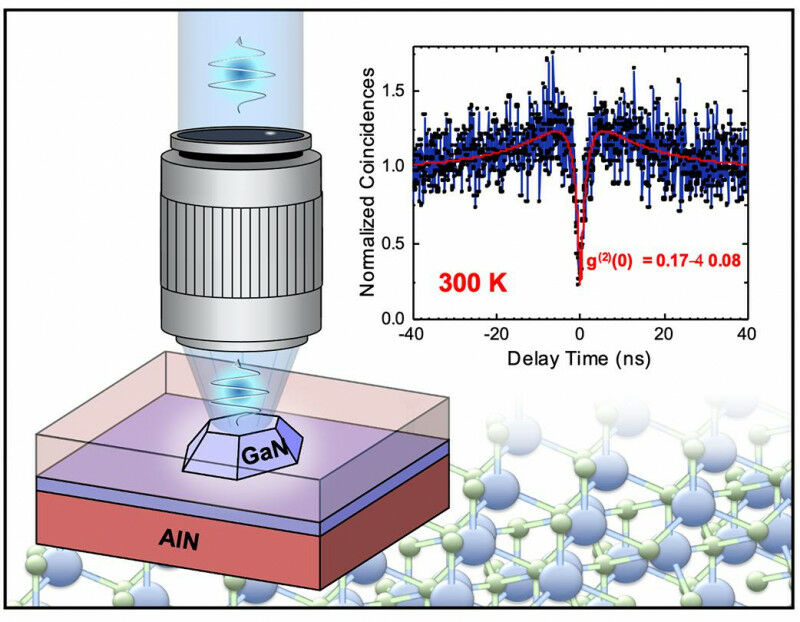 To get closer to quantum technology we need to develop non-classical light sources that can emit a single photon at a time and do so on demand. Scientists at EPFL have now designed one of these "single photon emitters" that can work at room temperature and are based on quantum dots grown on cost-effective silicon substrates.

Developing non-classical light sources that can emit, on-demand, exactly one photon at a time is one of the main requirements of quantum technologies. But although the first demonstration of such a "single photon emitter", or SPE, dates back to the 1970s, their low reliability and efficiency has been stood in the way of any meaningfully practical use.

Conventional light sources like incandescent light bulbs or LEDs emit bunches of photons at a time. In other words, their probability to emit a single photon at a time is very low. Laser sources can emit streams of single photons, but not on-demand, which means that, sometimes, there will be no photons whatsoever emitted when we want them to.

So the main advantage of SPEs is that they can do both: emit a single photon and do so on-demand - or, in more technical terms, their single-photon purity, which they can maintain at an ultrafast timeframe. Thus, for a light source to qualify as an SPE, it must feature a single-photon purity above 50%; of course, the closer to 100%, the closer we will be to an ideal SPE.

The SPE also shows photon emission rates up to 1 MHz while maintaining a single-photon purity over 50%. "Such brightness up to room temperature is possible because of the unique electronic properties of the GaN/AlN quantum dots, which preserves the single-photon purity due to the limited spectral overlap with competing neighboring electronic excitation," says Stachurski, the PhD candidate who investigated these quantum systems.

"A very appealing feature of GaN/AlN quantum dots is that they belong to the III-nitride semiconductor family, namely that behind the solid-state lighting revolution (blue and white LEDs) whose importance was recognized by the Nobel prize in Physics in 2014," state the researchers. "It is nowadays the second semiconductor family in terms of consumer market right after silicon that dominates the microelectronic industry. As such, III-nitrides benefit from a solid and mature technological platform, which makes them of high potential interest for the development of quantum applications."

An important future step will be to see if this platform can emit one photon and only one per laser pulse, which is an essential prerequisite to determine its efficiency.

"Since our electronic excitations exhibit room temperature lifetimes as short as 2 to 3 billionth of a second, single photon rates of several tens of MHz could be within reach," state the authors. "Combined with resonant laser excitation, which is known to significantly improve single-photon purity, our quantum-dot platform could be of interest for implementing room-temperature quantum key distribution based on a true SPE, as opposed to current commercial systems that run with attenuated laser sources."