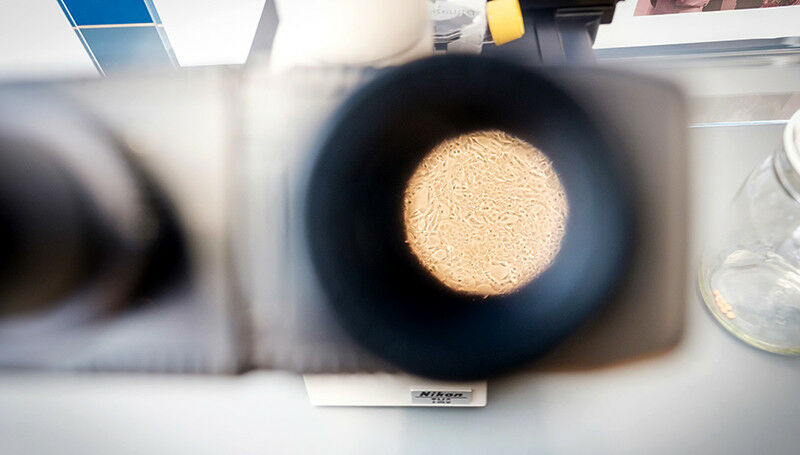 Scientists from Eawag, along with researchers from the former Eawag spin-off aQuatox-Solutions and the National Institute of Biology in Slovenia, have won almost 800,000 Swiss francs in the second phase of a contest run by the British Centre for the Replacement of Animals in Research.

Countless chemical substances that are in daily use, such as pesticides, pharmaceuticals and industrial chemicals, sooner or later find their way into rivers, lakes and groundwater. To ensure that they do not cause damage, they normally have to undergo an environmental risk assessment before they are approved - a procedure that tests how toxic a chemical is to various organisms in our natural environment, including fish. Numerous efforts worldwide are focused on making it possible to carry out such ecotoxicological tests without having to rely on live animals.

Building on an innovative concept

A new approach to replacing in vivo tests on fish is now being developed by Eawag, together with researchers from the former Eawag spin-off aQuaTox-Solutions and the Slovenian National Institute of Biology. After winning GBP 100,000 in Phase 1 of the "CRACK IT Challenge SAFE - innovative Safety Assessment of Fish adverse Effects" run by the British National Centre for the Replacement, Refinement and Reduction of Animals in Research (NC3Rs), the researchers have now been awarded an additional GBP 700,000 (around 800,000 Swiss francs) to bring the process to market. Phase 2 lasts three years and is supported by the Challenge Sponsors AstraZeneca, Bayer and Unilever. In developing the new test system, the scientists are relying on a concept that is not yet widely used in risk assessment: Adverse Outcome Pathways (AOP).

What are AOPs and how do they work in environmental risk assessment?

Schirmer: The idea is to understand how chemicals exert toxic effects on living organisms. AOPs describe events that lead to toxicity, starting at the molecular level and continuing to the cell, tissue and whole organism level, similar to a domino effect. The final adverse outcome is traditionally measured in animal experiments, for example when a fish can no longer grow, cannot reproduce or even dies. But how did this outcome emerge? We should be able to measure some of these events in cultured cells - we just have to find the right combination that can accurately predict the end result. This is our starting point. Our hypothesis is that we can measure relevant AOPs using cultured fish cells, called cell lines. The measured data will then flow into a computer model, so that in the future it will be sufficient to observe these processes in cell cultures in order to calculate the effect on an organism, in our case fish, without having to carry out animal experiments.

You have already established tests that assess the effects of chemicals on fish cells instead of on fish. The AOP tests are a further development of this. Why is this needed?

Fischer: Yes, aQuaTox-Solutions has a number of tests with fish cell cultures in its portfolio, which we offer to the chemical industry, environmental authorities or fish food manufacturers as an alternative to conventional fish tests for risk assessment. A pioneer of these fish cell tests is the so-called RTgill-W1 cell line test for determining acute fish toxicity, which was developed by Eawag and now holds both ISO and OECD certification. However, as is the case with animal testing, with most of these tests, we do not look at the pathways of toxicity, but simply measure the end result, for example cell survival or growth. By adding AOPs to our toolbox, we are aiming for an even better resolution of chemical effects and thus even more sensitive and broadly applicable tests.

Schirmer: The object of our project is to develop scalable cell-based tests in combination with computer models in such a way that statements allow users to ascertain the effects of chemicals on fish without animal testing. We are focusing on chemicals that hinder fish reproduction. In phase 1 of this project, we developed a novel, multi-step computational pipeline which allows us to identify molecular processes that can predict whether the reproduction of fish is impaired by the chemical. We are looking to detect these processes in fish cell lines and to use these data to develop computer-based prediction models for fish.

Fischer: We will make our knowledge and the services and products we develop widely available to ensure maximum benefit in replacing animal testing. Support for this competition by the chemical industry shows us that there is demand. We are not only talking about risk assessment of chemicals to be brought to market, but also about more efficient product development to exclude chemicals that are toxic to fish from the outset. Other potential applications involve aquaculture or testing of environmental samples.

What inspired you to take part in this challenge?

Both: The Challenge feels like it is tailor-made for us. We have been working for a long time on the idea of replacing animal experiments involving fish with fish cell lines and of standardising such tests, as well as on the connection with computer models. Accepting the challenge is a matter close to our hearts, and the fact that we have been awarded the funding is a great honour and motivation.