An innovation that helps save heating costs

This week, the Empa Innovation Award was presented for the eleventh time. The award honors outstanding projects that bridge the gap between lab and practical applications. This year’s winner is viboo. The Empa spin-off has developed a self-learning algorithm for a more efficient control of the indoor climate in buildings, which can achieve energy savings of between 20 and 40 percent.

The Empa Innovation Award honors outstanding innovations and technology transfer projects. This year’s award goes to the Empa spin-off viboo, which provides answers to the question of how buildings can be operated more efficiently and thus save energy - a question that has enormous relevance, particularly with regard to the current energy crisis.

The company was founded in March 2022 by researchers Felix Bünning and Benjamin Huber, together with Matthias Sulzer, senior researcher at Empa. Over several years of research in Empa’s Urban Energy Systems Lab, Bünning and Huber developed a control algorithm that can calculate and optimize a building’s energy use several hours in advance based on weather and building data. In numerous experiments in the innovation building NEST and most recently in a pilot test in an office building on the Empa campus, the researchers showed that this approach allows heating energy savings of about a quarter.

And even better: Implementing the solution into existing buildings is rather easy - by simply replacing analog thermostats with "smart" ones. To this end, viboo is working with the international manufacturer Danfoss, which offers smart solutions in its portfolio. To further pave the way for market entry, viboo will carry out further pilot projects in the next heating period - together with Danfoss, but also other manufacturers such as ABB and Schneider Electric. Moreover, the spin-off will equip other buildings on the Empa campus with its solution.

With the Empa Innovation Award, the two young entrepreneurs not only receive the recognition of the award jury, consisting of experts from Empa and its industrial advisory board, but also CHF 5,000 in prize money. "We are very happy about this appreciation and support from Empa," said Felix Bünning at the award ceremony. Benjamin Huber added: "We will soon return the favor and do our part to help Empa get well through the coming heating period."

Every two years since 2006, Empa has given the Empa Innovation Award in recognition of outstanding innovation and technology transfer projects. The prize, endowed with CHF 5,000, honors an individual, a research group or lab for excellent innovations or a successful technology transfer to the private sector. Empa thus honors the efforts of its researchers to strengthen and expand the bridge between science and industry with outstanding applied, market-oriented research. 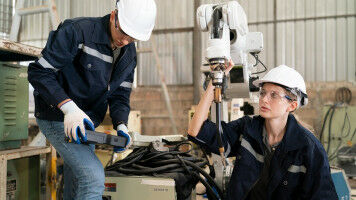