First attempt at 7 TeV collisions in the LHC 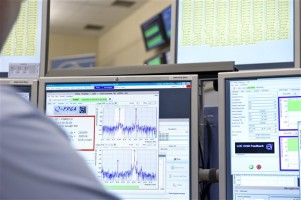 An LHC operator in the CERN Control Centre during the record-breaking ramp in beam energy 19 March. Photo: M. Brice / CERN.

With beams routinely circulating in the Large Hadron Collider at 3.5 TeV, the highest energy yet achieved in a particle accelerator, CERN has set the date for the start of the LHC research programme. The first attempt for collisions at 7 TeV (3.5 TeV per beam) is scheduled for 30 March.

“With two beams at 3.5 TeV, we’re on the verge of launching the LHC physics programme,” explained CERN’s Director for Accelerators and Technology, Steve Myers. “But we’ve still got a lot of work to do before collisions. Just lining the beams up is a challenge in itself: it’s a bit like firing needles across the Atlantic and getting them to collide half way.”

Between now and 30 March, the LHC team will be working with 3.5 TeV beams to commission the beam control systems and the systems that protect the particle detectors from stray particles. All these systems must be fully commissioned before collisions can begin.

“The LHC is not a turnkey machine,” said CERN Director General Rolf Heuer.“The machine is working well, but we’re still very much in a commissioning phase and we have to recognize that the first attempt to collide is precisely that. It may take hours or even days to get collisions.”

The last time CERN switched on a major new research machine, the Large Electron Positron collider, LEP, in 1989 it took three days from the first attempt to collide to the first recorded collisions.

The current LHC run began on 20 November 2009, with the first circulating beam at 0.45 TeV. Milestones were quick to follow, with twin circulating beams established by 23 November and a world record beam energy of 1.18 TeV being set on 30 November. By the time the LHC switched off for 2009 on 16 December, another record had been set with collisions recorded at 2.36 TeV and significant quantities of data recorded. Over the 2009 part of the run, each of the LHC’s four major experiments, ALICE, ATLAS, CMS and LHCb recorded over a million particle collisions, which were distributed smoothly for analysis around the world on the LHC computing grid. The first physics papers were soon to follow. After a short technical stop, beams were again circulating on 28 February 2010, and the first acceleration to 3.5 TeV was on 19 March.

Once 7 TeV collisions have been established, the plan is to run continuously for a period of 18-24 months, with a short technical stop at the end of 2010. This will bring enough data across all the potential discovery areas to firmly establish the LHC as the world’s foremost facility for high-energy particle physics.

A material-keyboard made of graphene - 05.05