Are neutrinos faster than the speed of light? 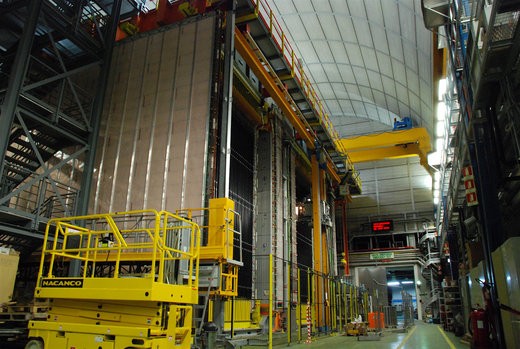 View of OPERA detector. The OPERA experiment observes neutrino beams from CERN 730 km away at a Laboratory near Rome.

Researchers measured that the neutrinos travel at a velocity 20 parts per million above the speed of light, nature’s cosmic speed limit. This is a result of the OPERA experiment which observes neutrino beams from CERN 730 km away at a Laboratory near Rome.

The OPERA result is based on the observation of over 15000 neutrino events measured at Gran Sasso, and appears to indicate that the neutrinos travel at a velocity 20 parts per million above the speed of light, nature’s cosmic speed limit. Given the potential far-reaching consequences of such a result, independent measurements are needed before the effect can either be refuted or firmly established. This is why the OPERA collaboration has decided to open the result to broader scrutiny.

The OPERA measurement is at odds with well-established laws of nature, though science frequently progresses by overthrowing the established paradigms. For this reason, many searches have been made for deviations from Einstein’s theory of relativity, so far not finding any such evidence. The strong constraints arising from these observations makes an interpretation of the OPERA measurement in terms of modification of Einstein’s theory unlikely, and give further strong reason to seek new independent measurements.

“This result comes as a complete surprise,” said OPERA spokesperson, Antonio Ereditato of the University of Bern. “After many months of studies and cross checks we have not found any instrumental effect that could explain the result of the measurement. While OPERA researchers will continue their studies, we are also looking forward to independent measurements to fully assess the nature of this observation.”

“When an experiment finds an apparently unbelievable result and can find no artefact of the measurement to account for it, it’s normal procedure to invite broader scrutiny, and this is exactly what the OPERA collaboration is doing, it’s good scientific practice,” said CERN Research Director Sergio Bertolucci.“If this measurement is confirmed, it might change our view of physics, but we need to be sure that there are no other, more mundane, explanations. That will require independent measurements.”

In order to perform this study, the OPERA Collaboration teamed up with experts in metrology from CERN and other institutions to perform a series of high precision measurements of the distance between the source and the detector, and of the neutrinos’ time of flight. The distance between the origin of the neutrino beam and OPERA was measured with an uncertainty of 20 cm over the 730 km travel path. The neutrinos’ time of flight was determined with an accuracy of less than 10 nanoseconds by using sophisticated instruments including advanced GPS systems and atomic clocks. The time response of all elements of the CNGS beam line and of the OPERA detector has also been measured with great precision.

"We have established synchronization between CERN and Gran Sasso that gives us nanosecond accuracy, and we’ve measured the distance between the two sites to 20 centimetres,” said Dario Autiero, the CNRS researcher who will give this afternoon’s seminar. “Although our measurements have low systematic uncertainty and high statistical accuracy, and we place great confidence in our results, we’re looking forward to comparing them with those from other experiments."

“The potential impact on science is too large to draw immediate conclusions or attempt physics interpretations. My first reaction is that the neutrino is still surprising us with its mysteries.” said Ereditato. “Today’s seminar is intended to invite scrutiny from the broader particle physics community.”

The OPERA experiment was inaugurated in 2006, with the main goal of studying the rare transformation (oscillation) of muon neutrinos into tau neutrinos. One first such event was observed in 2010, proving the unique ability of the experiment in the detection of the elusive signal of tau neutrinos.

The OPERA experiment will present the new results in a seminar at CERN this afternoon at 16:00 CEST. The seminar will be webcast at http://webcast.cern.ch. Journalists wishing to ask questions may do so via twitter using the hash tag #nuquestions, or via the usual CERN press office channels.