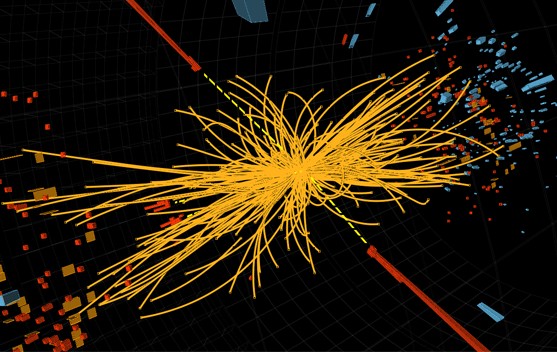 A proton-proton collision event in the CMS experiment producing two high-energy photons (red towers). This is what we would expect to see from the decay of a Higgs boson but it is also consistent with background Standard Model physics processes. © CERN 2012

Geneva, 4 July 2012. At a seminar held at CERN today as a curtain raiser to the year’s major particle physics conference, ICHEP2012 in Melbourne, the ATLAS and CMS experiments presented their latest preliminary results in the search for the long sought Higgs particle. Both experiments observe a new particle in the mass region around 125-126 GeV.

"We observe in our data clear signs of a new particle, at the level of 5 sigma, in the mass region around 126 GeV. The outstanding performance of the LHC and ATLAS and the huge efforts of many people have brought us to this exciting stage," said ATLAS experiment spokesperson Fabiola Gianotti, "but a little more time is needed to prepare these results for publication."

"The results are preliminary but the 5 sigma signal at around 125 GeV we’re seeing is dramatic. This is indeed a new particle. We know it must be a boson and it’s the heaviest boson ever found," said CMS experiment spokesperson Joe Incandela. "The implications are very significant and it is precisely for this reason that we must be extremely diligent in all of our studies and cross-checks."

"It’s hard not to get excited by these results," said CERN Research Director Sergio Bertolucci. " We stated last year that in 2012 we would either find a new Higgs-like particle or exclude the existence of the Standard Model Higgs. With all the necessary caution, it looks to me that we are at a branching point: the observation of this new particle indicates the path for the future towards a more detailed understanding of what we’re seeing in the data."

The results presented today are labelled preliminary. They are based on data collected in 2011 and 2012, with the 2012 data still under analysis.  Publication of the analyses shown today is expected around the end of July. A more complete picture of today’s observations will emerge later this year after the LHC provides the experiments with more data.

The next step will be to determine the precise nature of the particle and its significance for our understanding of the universe. Are its properties as expected for the long-sought Higgs boson, the final missing ingredient in the Standard Model of particle physics? Or is it something more exotic? The Standard Model describes the fundamental particles from which we, and every visible thing in the universe, are made, and the forces acting between them. All the matter that we can see, however, appears to be no more than about 4% of the total. A more exotic version of the Higgs particle could be a bridge to understanding the 96% of the universe that remains obscure.

"We have reached a milestone in our understanding of nature," said CERN Director General Rolf Heuer. "The discovery of a particle consistent with the Higgs boson opens the way to more detailed studies, requiring larger statistics, which will pin down the new particle’s properties, and is likely to shed light on other mysteries of our universe."

Positive identification of the new particle’s characteristics will take considerable time and data. But whatever form the Higgs particle takes, our knowledge of the fundamental structure of matter is about to take a major step forward.