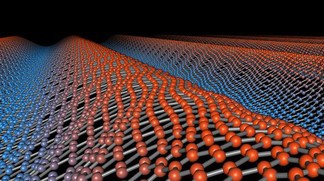 EPFL researchers have shed new light on the fundamental mechanisms of heat dissipation in graphene and other two-dimensional materials. They have shown that heat can propagate as a wave over very long distances. This is key information for engineering the electronics of tomorrow.

In the race to miniaturize electronic components, researchers are challenged with a major problem: the smaller or the faster your device, the more challenging it is to cool it down. One solution to improve the cooling is to use materials with very high thermal conductivity, such as graphene, to quickly dissipate heat and thereby cool down the circuits.

At the moment, however, potential applications are facing a fundamental problem: how does heat propagate inside these sheets of materials that are no more than a few atoms thick?

In a study published in Nature , a team of EPFL researchers has shed new light on the mechanisms of thermal conductivity in graphene and other two-dimensional materials. They have demonstrated that heat propagates in the form of a wave, just like sound in air. This was up to now a very obscure phenomenon observed in few cases at temperatures close to the absolute zero.Their simulations provide a valuable tool for researchers studying graphene, whether to cool down circuits at the nanoscale, or to replace silicon in tomorrow’s electronics.

Quasi-Lossless Propagation
If it has been difficult so far to understand the propagation of heat in two-dimensional materials, it is because these sheets behave in unexpected ways compared to their three-dimensional cousins. In fact, they are capable of transferring heat with extremely limited losses, even at room temperature.

Generally, heat propagates in a material through the vibration of atoms. These vibrations are are called "phonons", and as heat propagates though a three-dimensional material, these phonons keep colliding with each other, merging together, or splitting. All these processes can limit the conductivity of heat along the way. Only under extreme conditions, when temperature goes close to the absolute zero ( -200 0C or lower), it is possible to observe quasi-lossless heat transfer.


A wave of quantum heat
The situation is very different in two dimensional materials, as shown by researchers at EPFL. Their work demonstrates that heat can propagate without significant losses in 2D even at room temperature, thanks to the phenomenon of wave-like diffusion, called "second sound". In that case, all phonons march together in unison over very long distances. "Our simulations, based on first-principles physics, have shown that atomically thin sheets of materials behave, even at room temperature, in the same way as three-dimensional materials at extremely low temperatures" says Andrea Cepellotti, the first author of the study. "We can show that the thermal transport is described by waves, not only in graphene but also in other materials that have not been studied yet," explains Cepellotti. "This is an extremely valuable information for engineers, who could adapt the design of future electronic components using some of these novel two-dimensional materials properties."

Expanding the limits of ferroelectrics - 09.06