Ground squirrels use the sun to hide food 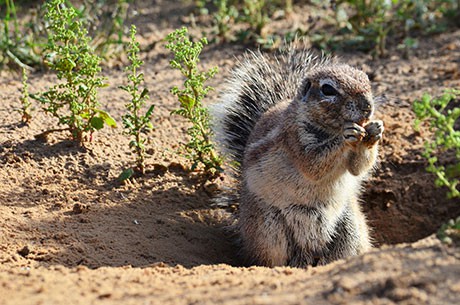 Jamie Samson and Marta Manser from the Department of Evolutionary Biology and Environmental 1Studies at UZH studied colonies of Cape ground squirrels (Xerus inauris) in the wild at the Kalahari Research Center in South Africa. The diurnal rodents temporarily store their food reserves in several hiding places. As their habitat is very arid and sparsely vegetated, points of reference in the environment, such as trees or bushes, are few and far between. The UZH researchers have now discovered how the social rodents orient themselves to find their way back to their temporary food stashes. “The squirrels probably use the position of the sun as the most important cue to roughly adjust their direction of movement,” explains Samson.

Position of the sun as a rough guide

The behavioral biologists gave the ground squirrels food to hide. The direction in which the rodents bolted with their spoils was recorded with the aid of GPS points. The striking thing was that the animals moved in an almost straight line either towards or away from the sun to find a suitable hiding place. Every time, the horizontal angle of their direction of movement deviated slightly from the direction of the sun. “Based on this movement pattern,” interprets Samson, “we presume that Cape ground squirrels use the position of the sun at a particular time of day as a rule of thumb to find their bearings when searching for a place to hide their food.”

Next, the researchers set about determining whether the Cape ground squirrels also used the position of the sun to find their food stash again. They noted the time when the animals hid the food and recorded when exactly they returned to collect it by setting up cameras near the hoard. Sure enough, there was a pattern here, too: The ground squirrels tended to recover their food almost exactly 24 hours later – i.e. at a time when the sun was in virtually the same position in the sky as the previous day.

Moreover, the scientists observed that the ground squirrels sometimes recovered their food before the 24 hours had elapsed – when the sun was at the same mirrored angle to the 24-hour position. According to Samson, the rodents therefore have two possible moments to recover food from a hiding place selected the previous day: “The squirrels seem to have a certain flexibility regarding when they recover their food. This usually happens before the 24-hour point, if there are more individuals at the group during that time – to prevent the food from being stolen by rivals.”

Animals such as honeybees or carrier pigeons have long been known to use the sun as a navigational aid. Previously, it was assumed that this either happened time-dependently, i.e. with specific position information, or the animals have a kind of compass, which they use to compensate for shifts in the sun’s position. The UZH scientists have now found an intermediary system between these two systems revealing that Cape ground squirrels are able to use the sun as a navigational aid in a flexible, temporary way.

Jamie Samson and Marta B. Manser Use of the sun as a heading indicator when caching and recovering in a wild rodent. Scientific Reports. September 1, 2016. 10.1038/srep32570

Promoting the many aspects of sustainability in public procurement  - 26.09
This site uses cookies and analysis tools to improve the usability of the site. More information. |