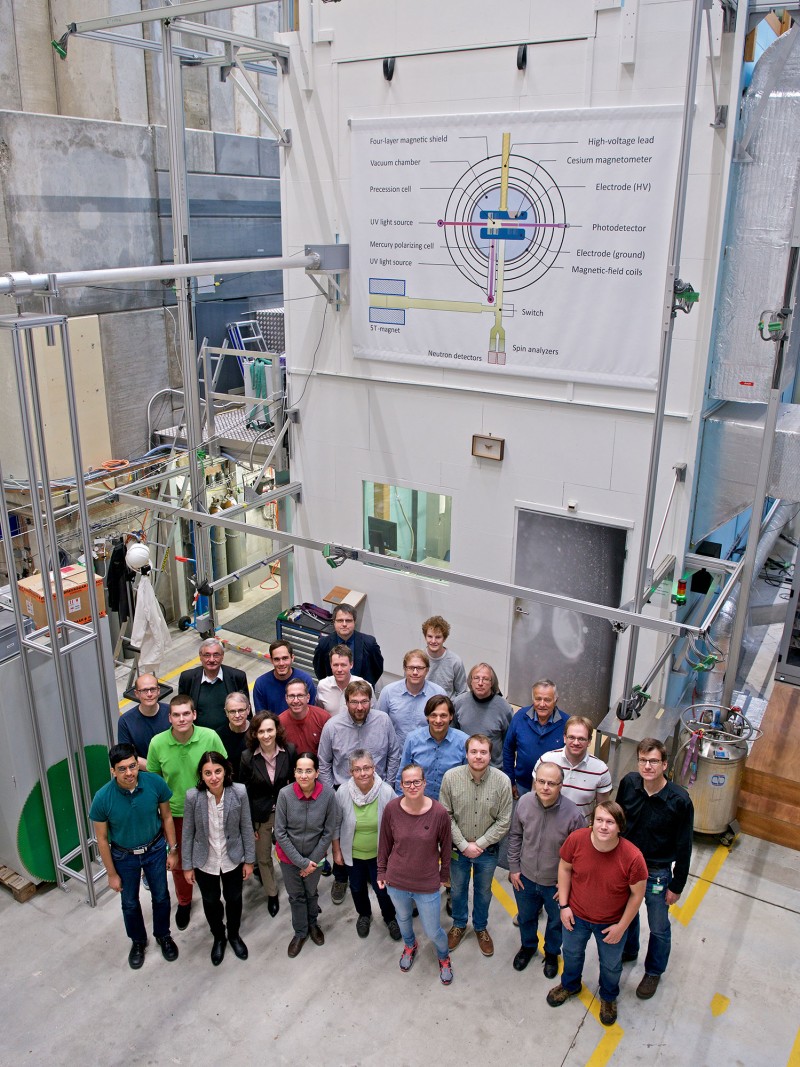 Researchers from seven countries are participating in the experiment to determine the electric dipole moment of the neutron. The photo shows part of the team in front of the research facility at PSI where the studies were conducted. The data obtained here were also used by the researchers in the search for dark matter. (Photo: Paul Scherrer Institute/Markus Fischer)

Measurements at the Paul Scherrer Institute PSI further constrain theories about the nature of dark matter Experts are largely in agreement that a major portion of the mass in the universe consists of so-called dark matter. Its nature, however, remains completely obscure. One kind of hypothetical elementary particle that might make up the dark matter is the so-called axion. If axions exist, it might be possible to detect them at a research facility of the Paul Scherrer Institute PSI - the Ultra Cold Neutron Source UCN. An international team has now analysed measurement results collected at PSI, together with data obtained at the neutron source ILL in Grenoble, and come up with a major negative result: No interaction with axions was observed. These measurements improve on the accuracy of previous measurements, which come from astrophysical observations, by a factor of 1,000 and provide evidence that axions - at least the kind that would have been observable in the experiment - do not exist. This does not rule out the existence of axions, but the scope of characteristics that these particles could have is now distinctly limited. Thus the experiments make an important contribution to the search for dark matter. The researchers report their findings in the online journal Physical Review X.

The stars and galaxies of the universe influence each other’s movements through their mutual gravitational attraction. Yet the forces of all visible astronomical objects are by far insufficient to explain why the galaxies move the way they do. Therefore researchers postulate the existence of dark matter that is thought to make up most of the matter in the universe. What this dark matter consists of is, so far, completely obscure. In any case, it is not composed of the same particles as the stars, Earth, or ourselves. At the same time, to explain the processes observed in the universe, the total mass of the dark matter must be roughly five times that of all of the ordinary matter known to us. Researchers have developed numerous theoretical models concerning the nature of this dark matter. One promising possibility is that it consists of the so-called axions. This is a class of particles, as yet hypothetical, that were first postulated in various physical theories because their existence could explain certain phenomena of particle physics that are still not understood.

If the axions exist, it would be possible to observe them under certain conditions at the Paul Scherrer Institute PSI - to be precise, at the Ultra Cold Neutron Source UCN, one of the institute’s research facilities. Here, within the framework of an international collaboration, researchers from seven nations are investigating mainly the properties of the neutron itself - in particular, they want to determine its electric dipole moment. Although the neutron has no overall electric charge, it still might have an electric dipole moment. To form a mental picture, one could imagine it’s as if, in this case, the electrically positively charged part in its interior was offset slightly with respect to the negative. The existence of such a static electric dipole moment is linked to many current problems of modern physics - such as the question of why the universe contains more matter than antimatter. In the measurement data recorded for the studies of the neutron, it is possible the existence of axions might also appear. For that, we examined a different aspect in these data , says Klaus Kirch, head of the Laboratory for Particle Physics at PSI and a professor at ETH Zurich. In our experiment, a single measurement of the dipole moment lasts around five minutes. To obtain a good result for the static dipole moment of the neutron, we carry out this measurement many times and determine the average value over a long time. For the search for axions, on the other hand, we look to see if the measurement results fluctuate over time with a constant frequency. Such an oscillation would be evidence, specifically, of an interaction between the neutron and the hypothetical particle. That the axions could be indirectly detected in this way is due to the fact that they interact with other matter not only through gravitation; they could also, for example, couple to gluons, the glue particles that in a sense hold the neutron together internally. The encounter with an axion could therefore generate an electric dipole moment. Roughly speaking, axions would change the shape of the neutron and thus the distribution of its internal electric charge.

No such oscillation has been detected to date in measurement data from the experiment at PSI, and it does not appear in the data of a forerunner experiment at the neutron source ILL in Grenoble, which was newly evaluated in this project. These two experiments are the first in which researchers have studied the coupling of axions to gluons directly in the laboratory. Previous insights about such interconnections could only be obtained indirectly from astrophysical observations and cosmological models. The new laboratory measurements improve the accuracy of these earlier results by as much as a factor of 1,000, and they lead to the conclusion that the existence of axions with certain characteristics can be reliably ruled out. The results disprove those physical models that postulate axions with these characteristics and thus help to limit the variety of particles that are possible candidates for dark matter , Kirch says. There are two essential reasons why the experiment does not encompass all conceivable kinds of axions. The axions would need to have interacted strongly enough with the neutrons for the oscillation to manifest itself in the measurement data. In addition, their mass may not be too large, because a high mass would lead to a high oscillation frequency that, given the five-minute steps in the measurements carried out to date, could not be observed.

Short film of a magnetic nano-vortex - 24.02
Time-resolved measurement in a memory device - 19.02