A revolutionary material for aerospace and neuromorphic computing 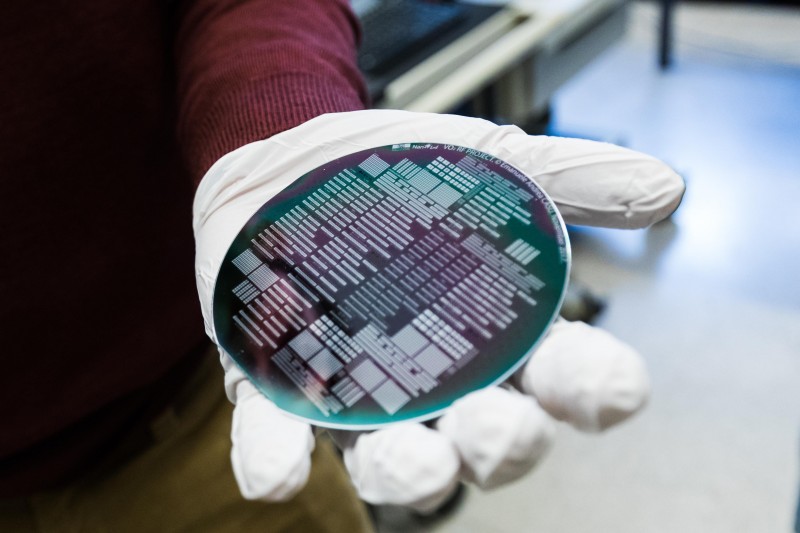 Vanadium dioxide’s unique properties make it perfect for outperforming silicon and giving rise to a new generation of low-power electronic devices. Under the Phase Change Switch project ( https://phasechange-switch.org/ ), which is being funded by the EU’s Horizon 2020 research program and coordinated by EPFL researchers, engineers have shown how this compound can be used to create programmable radiofrequency electronic functions for aerospace communication systems. Other applications - such as in neuromorphic computing and artificial intelligence - are also on the cards.

First came the switch. Then the transistor. Now another innovation stands to revolutionize the way we control the flow of electrons through a circuit: vanadium dioxide (VO2). A key characteristic of this compound is that it behaves as an insulator at room temperature but as a conductor at temperatures above 68°C. This behavior - also known as metal-insulator transition - is being studied in an ambitious EU Horizon 2020 project called Phase-Change Switch. EPFL was chosen to coordinate the project following a challenging selection process.

The project will last until 2020 and has been granted €3.9 million of EU funding. Due to the array of high-potential applications that could come out of this new technology, the project has attracted two major companies - Thales of France and the Swiss branch of IBM Research - as well as other universities, including Max-Planck-Gesellschaft in Germany and Cambridge University in the UK. Gesellschaft für Angewandte Mikround Optoelektronik (AMO GmbH), a spin-off of Aachen University in Germany, is also taking part in the research.

Scientists have long known about the electronic properties of VO2 but haven’t been able to explain them until know. It turns out that its atomic structure changes as the temperature rises, transitioning from a crystalline structure at room temperature to a metallic one at temperatures above 68°C. And this transition happens in less than a nanosecond - a real advantage for electronics applications. "VO2 is also sensitive to other factors that could cause it to change phases, such as by injecting electrical power, optically, or by applying a THz radiation pulse," says Adrian Ionescu, the EPFL professor who heads the school’s Nanoelectronic Devices Laboratory (Nanolab) and also serves as the Phase-Change Switch project coordinator.

However, unlocking the full potential of VO2 has always been tricky because its transition temperature of 68°C is too low for modern electronic devices, where circuits must be able to run flawlessly at 100°C. But two EPFL researchers - Ionescu from the School of Engineering (STI) and Andreas Schüler from the School of Architecture, Civil and Environmental Engineering (ENAC) - may have found a solution to this problem, according to their joint research published in Applied Physics Letters in July 2017. They found that adding germanium to VO2 film can lift the material’s phase change temperature to over 100°C.

Even more interesting findings from the Nanolab - especially for radiofrequency applications - were published in IEEE Access on 2 February 2018. For the first time ever, scientists were able to make ultra-compact, modulable frequency filters. Their technology also uses VO2 and phase-change switches, and is particularly effective in the frequency range crucial for space communication systems (the Ka band, with programmable frequency modulation between 28.2 and 35 GHz).

Neuromorphic processors and autonomous vehicles
These promising discoveries are likely to spur further research into applications for VO2 in ultra-low-power electronic devices. In addition to space communications, other fields could include neuromorphic computing and high-frequency radars for self-driving cars.

Tackling the high-voltage needs of next-gen satellites - 02.11
Green electronics made from wood - 30.08

A new chair in quantum communication in Geneva - 30.11
This site uses cookies and analysis tools to improve the usability of the site. More information. |