Science is keeping pace with marathoners 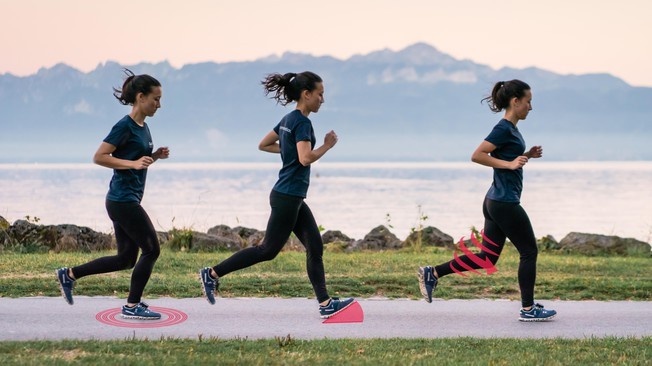 The sensors placed on the shoes record a lot of data throughout the race. © 2018 Gait-up

Thanks to sensors attached to their shoes, long-distance runners can harness the power of algorithms to analyze their stride. The algorithms, developed by EPFL spin-off Gait Up and tested in the Laboratory of Movement Analysis and Measurement (LMAM), are unmatched in terms of precision and the range of parameters measured, such as objective fatigue, cadence, strike angle and foot impact.


In recent years, the market for wearable sports sensors has taken off. They generate data on athletes’ progress and potential areas of improvement, as well as providing motion analysis. Yet amateurs and pros don’t require the same level of precision in measuring, assessing and comparing their performance. That’s where Gait Up comes in: while mass-market sensors generally have a margin of error of 10-20%, Gait Up’s technology slashes that range less than 3%. The startup’s device, consisting of two extremely light cases - one for each foot - delivers highly precise data thanks to algorithms that were thoroughly vetted in the LMAM at EPFL and at UNIL. The device works so well that it is being used by Sub2hrs, a group of experts from a wide range of fields - such as bioenergy, biomechanics, nutrition, engineering and coaching - whose goal is to see a marathon run in under two hours within the next five years.

Whether during a marathon or ultra-marathon or while training, all high-level runners struggle with fatigue at one point or another. In order to deliver their peak performance on race day, they need to recognize the signs of fatigue and learn to work through it. One of the objective measurements they can use is their legs’ "springiness", which can be gauged through contact time, air time and the angle at which their feet strike the ground. In order to run quickly and efficiently, runners require a certain amount of stiffness in their legs - this varies from one person to the next. By recording various data over the course of a several-hour race, Gait Up’s system can provide a snapshot of this parameter in 15-minute intervals throughout the race.

The company’s algorithms also generate data on each foot’s strike angle, how much time the runner is not touching the ground, the distribution of weight during foot impact, and symmetry between the two feet. Because the sensors are feather light, they can be worn during races and long runs - a significant advantage over sensors whose use is limited to the treadmill. "On treadmills, a runner’s gait can diverge from their outdoor gait by 20%," says Benoît Mariani, Gait-up’s CEO and founder. The device’s data are so precise - they were tested through a CTI project conducted at EPFL and UNIL and have been published in three separate scientific articles - that they could even be used for medical analyses or applied to sports science research.

Gait Up’s sensors are also unique in that they do not need to be linked to any other device to work. The memory in the little wearable cases is all that’s needed to collect and store the data. Runners, their coaches and their doctors can then use the software provided with the device to analyze the data and get an accurate reading of the athletes’ performance and movement.

A version for sprinters

The high-precision sensors and the algorithms used to analyze the data were developed over the course of 20 years of research at EPFL. And it has been five years since Gait Up began creating a wide range of sensors and the underlying data processing algorithms. The company’s products are used in both sports - from walking to running - and medicine - from balance disorders to detecting diseases like Parkinson’s. The startup, which was founded in 2013 and currently has around 20 employees, was acquired by MindMaze in 2017. It is now working on adding video synchronization to its running sensor, so that an athlete’s body position can be viewed alongside the motion analysis. And while Gait Up’s sensor has been tested and evaluated for long-distance runners, a version delivering the same level of precision for sprinters is currently being developed.