A new theory of thermal conductivity 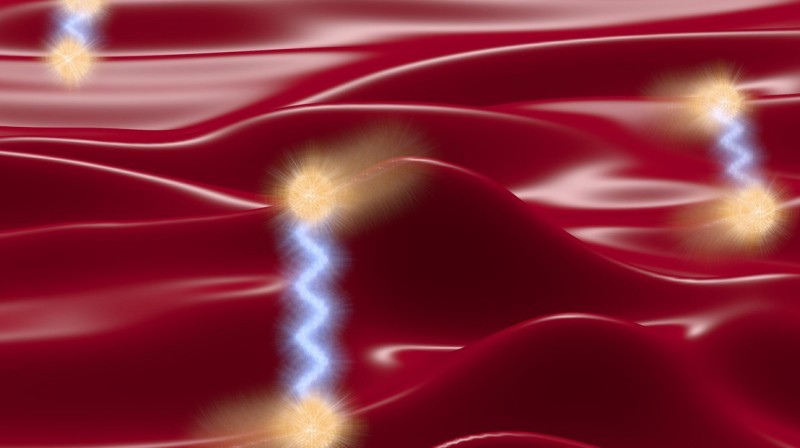 Researchers have developed a new theory for heat conduction that can finally describe and predict the thermal conductivity of any insulating material. This new formulation will let scientists make accurate predictions of thermal conductivity in a range of materials for critical engineering applications - from electronics to lasers to waste-heat recovery.

Thermoelectric materials in particular hold vast potential for use in energy applications because they generate electricity from waste heat, such as that generated by industrial processes, by car and truck engines, or simply by the sun. Reducing the thermal conductivity of these materials by a factor of three, for example, would completely revolutionize existing waste-heat recovery, and also all refrigeration and air-cooling technology.

A unique theory for all insulating materials

In the paper Unified theory of thermal transport in crystals and glasses, out , Michele Simoncelli, a PhD student at EPFL’s Theory and Simulation of Materials (THEOS) Laboratory - together with Nicola Marzari, a professor at EPFL’s School of Engineering and head of THEOS and of the MARVEL NCCR, and Francesco Mauri, a professor at the University of Rome-Sapienza - present a novel theory that finally decodes the fundamental, atomistic origin of heat conduction. Up to now, different formulations needed to be used depending on the systems studied (e.g., ordered materials, like a silicon chip, or disordered, like in a glass), and there wasn’t a unified picture covering all possible cases.

This has now been made possible by deriving directly from the quantum mechanics of dissipative systems a transport equation that covers on equal footing diffusion, hopping, and tunneling of heat.

This fundamental understanding will allow scientists and engineers to accurately predict the thermal conductivity of any insulating material (in metals, the heat is carried by the electrons, and that is well understood) - this is exceedingly important for thermoelectrics (i.e. materials that can convert heat into electricity), since these have both crystaland glass-like properties, and are much needed for waste-heat recovery, or for refrigeration without greenhouse gases (and if you think refrigeration is boring, it is worth remembering that Albert Einstein spent many years trying to invent a new form of refrigerator).

In order to develop such next-generation technology, however, scientists first need to understand how and to what extent materials conduct heat. "Up to now, two different equations have been used for calculating thermal properties: one describes perfectly crystalline materials - that is, materials with highly ordered atomic structures - and the other one completely amorphous materials like glass, whose atoms do not follow an ordered pattern," says Michele Simoncelli. These equations happened to work well in those special cases. "But between these two extremes lie a plethora of interesting cases, and neither equation worked - this is really where our contribution makes a profound difference"

* Illustration : Heat is the energy due to vibrations of atoms. The ridges represent the quantum vibrational energy levels of CsPbBr3, a promising thermoelectric material. Heat conduction originates from both diffusion of vibrational excitations (blurred spheres, following the energy level) and quantum tunnelling (jump between different energy levels, represented by blue waves).