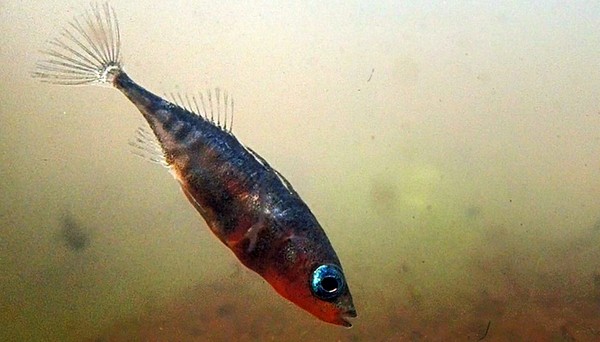 Darwin himself recognised the principle of adaptive radiation as being an important process in evolution. This principle says that, in a competitive situation, individuals in a species will search for new niches, where their populations adapt to environmental conditions through natural selection. This means that a single original species can fan out and evolve into numerous species with different niches. Of course, nowhere near all species within one family manage to adapt to new surroundings. A classic example of this is seen in the case of the stickleback.

The three-spined stickleback lives mainly in marine waters. Over the course of time it also ventured into freshwater bodies and radiated out into various ecotypes. This is in contrast to its sister species, the Japanese sea stickleback, which never managed to colonise freshwater bodies.

Why some species are able to adapt to very different environmental conditions, while others are not, is a key question of evolutionary biology, which had remained unanswered in the case of the stickleback until very recently. Now a team of biologists from Eawag, the University of Bern and the National Institute of Genetics in Shizuoka, Japan, have discovered a clue in the genetic material of the fish, namely, a gene called "Fads2". This gene converts unusable fatty acids into useful ones - primarily into the essential fatty acid, docosahexaenoic acid (DHA). This is particularly important in fresh water, as the food there contains practically no DHA, in contrast to that of marine environments. An enzyme that is produced on the basis of coding from Fads2 therefore has to make these fatty acids itself, otherwise the fish will starve in fresh water.

"What my Japanese colleague Asano Ishikawa caused to happen in the laboratory only happened to the three-spined stickleback in nature as the result of pure coincidence", says Ole Seehausen, a biologist at Eawag and the University of Bern. The gene was duplicated in the genome by chance a long time ago, which then allowed the three-spined stickleback to later colonise freshwater bodies.

Genetic mutations are usually disadvantageous. According to the researchers it is very rarely the case, particularly with duplications, that they lead to something advantageous. For example, a gene can be copied incompletely or reintroduced into the wrong place. It is therefore not surprising that relatives of the three-spined stickleback such as the Japanese stickleback have only one copy of the Fads2 gene and therefore remained sea-bound.

The study was the result of a collaboration between three research departments: with scientists from Eawag and the University of Bern, and Japanese researchers at the National Institute of Genetics in Shizuoka under Dr Asano Ishikawa und Jun Kitano.

A key metabolic gene for recurrent freshwater colonization and radiation in fishes.

Cognitive Elements of Language Have Existed for 40 Million Years - 21.10

How the visual cortex combines movement and vision - 21.10
Malice leaves a nasty smell - 18.10
Related Stories
Environment
The new mode of climate governance - 22.10
Lake Kivu: Danger of a lethal gas eruption is not increasing - 22.10