Researchers at EPFL have developed a new laser 3D-printing technique to manufacture metal components with unprecedented resistance to high temperature, damage and corrosion. The method has applications in fields ranging from aerospace to power-generating turbines.

3D printing, also known as additive manufacturing, has revolutionized the way components are made, setting new standards in terms of production speed when geometric complexity is high.

Manufacturers use a technique known as selective laser melting (SLM) to 3D-print metal components. With SLM, a powerful laser melts and fuses metallic powders together, gradually building a 3D component layer by layer. Any remaining powder is removed at the end of the process. But some metals and alloys cannot withstand the high temperature variations that SLM involves, causing them to crack.

Researchers at EPFL’s Laboratory of Thermomechanical Metallurgy (LMTM) , led by Roland Logé at the School of Engineering, have developed a new method that involves applying a second laser treatment every few layers during the building phase. This dramatically reduces cracking and produces metal components with unprecedented resistance to high temperature, damage and corrosion.

The patented technique, published in Additive Manufacturing , could be used to manufacture new power-generating turbine blades or key aircraft components, for example.

Shock waves
The results speak for themselves. The researchers found that the technique eliminated up to 95% of cracking normally observed in a nickel-based superalloy. They now plan to apply the method to other crack-sensitive alloys.

How does it work?

The researchers used a method known as laser shock peening, or LSP, to "heal" cracks on the fly during the 3D-printing process. LSP works by periodically directing high-intensity laser pulses on the component under construction. It acts as a sort of high-energy photonic "hammer," sending shock waves through the material.

The method involves two lasers. The first melts the metallic powders and heats the fused material, while the second generates stresses in the component in targeted locations to eliminate cracks. "Laser shock peening is normally reserved for surface treatments," explains Logé. "But in our case, it has become a bulk treatment, in that it operates in 3D within the material itself."

Several 3D-printing companies have expressed an interest in the new technique. "This hybrid 3D-printing method has applications that go way beyond eliminating cracks," adds Logé. "We’re only just beginning to understand its full potential." 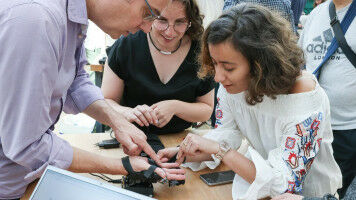