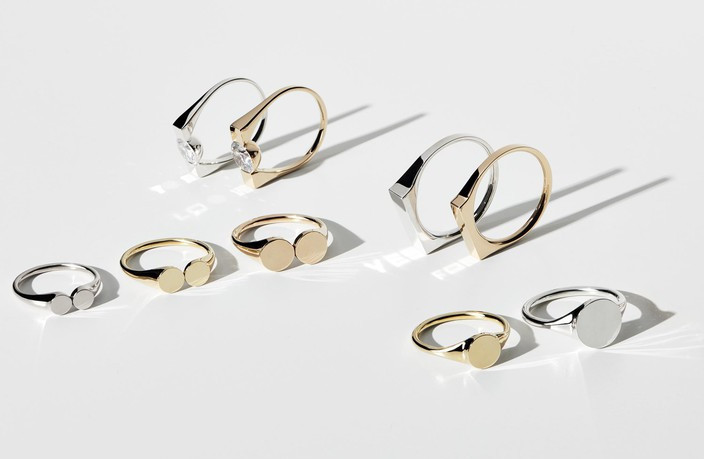 THE RAYY rings reflect light as words appearing on dark surfaces. © THE RAYY

Local startup Rayform has developed a collection of unique, stylish rings that employ technology developed at EPFL (Switzerland). The surface of each ring is structured so as to create messages out of reflected light.

look like normal pieces of jewelry. But shine light on them, and you’ll see they are in fact extraordinary. "The rings’ surface appears smooth, but it is actually structured extremely precisely so as to reflect light in a certain way and form words. Artificial light works, but the words appear best with sunlight," says Romain Testuz CEO of the startup behind THE RAYY brand.

This unique method for sculpting light was developed by scientists at EPFL’s Computer Graphics and Geometry Laboratory, headed by Mark Pauly. Professor Pauly was studying caustics, or the way light rays reflect off a surface and form patterns on another surface. This is the effect we see when we look at a swimming pool, for example, or through a glass of water. Testuz came up with the idea behind the jewelry when he was a Master’s student in Pauly’s lab: "We wondered if it would be possible to control the caustic - that is, to manipulate the reflection so that instead of random patterns, we could create precise images like pictures, words or symbols," says Testuz.

To explore their idea, the scientists developed a series of algorithms that could generate specific images. "We wrote a program to calculate the 3D curves we would need to etch into a surface in order to reflect light a certain way and create our designs," says Yuliy Schwartzburg, a former PhD student in Pauly’s lab who is now one of Rayform’s co-founders and its CTO. The tiny curves etched into a surface - using high-precision instruments - concentrate the light rays onto specific areas and turn them away from others. That results in reflections of the desired images.

In 2016, Schwartzburg, Testuz and Pauly created Rayform to develop and market various applications for their technology. The startup’s first step was to form partnerships with big names in the jewelry, watchmaking, perfume and spirits industries. "We also worked with artists, for example on the projections under the curves of the Rolex Learning Center, with artist Pierre Soulages, and on a research project with ECAL students," says Testuz.

In addition to creating captivating works of art, Rayform’s technology could also be used to develop systems for detecting counterfeits, like fake watches and documents. It would just take a simple flashlight to determine whether an object is embedded with a Rayform device - or not. "For now, these types of counterfeit-detection systems are not on the market, but the R&D is under way," says Testuz.

The scientists had to overcome an additional challenge to create their THE RAYY jewelry collection. "The surface area available on a piece of jewelry is very small. But we were still able to find a way to produce clear, high-resolution images," says Schwartzburg.