New perspectives in tax competition: the rise of tax havens in Switzerland 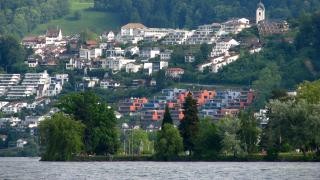 The town of Wollerau, Canton Schwyz, which lies on the upper Zürichsee ( Wikimedia)

How do local tax havens emerge? Is tax competition harmful? Raphaël Parchet, Assistant professor at the Faculty of Economics of Università della Svizzera italiana, addresses these questions in his new project "Sorting, Tax Competition and the Rise of Local Tax Havens", funded by the Swiss National Science Foundation (SNSF), shedding new light on the logic behind the rise of tax havens in Switzerland.

The emergence of tax havens

Professor Parchet has been devoting much of his research to the topic of tax competition, paying particular attention to Swiss municipalities. His new research project, which received a 3-year funding from the SNSF, will now focus on the increasingly hotly debated topic of the emergence of tax havens.

The project builds on one of Parchet’s recent articles, "Culture and Taxes" (published in the Journal of Political Economy, jointly written with Beatrix Eugster from the University of St. Gallen). "Casual empirical evidence of Swiss municipalities suggests that some places indeed emerge as tax havens with (very) low tax rates, a high concentration of top-income taxpayers and high housing prices", explains Professor Parchet. Other typical elements that characterize a tax haven are, as anecdotal evidence indicates, rather small dimensions, the presence of high amenities - as for example the access to a lake - and a good connection to a nearby major urban centre. Wollerau, a municipality in the Canton of Schwyz, could represent a good and fitting example of this initial hypothesis: located on the shores of Lake Zurich, well connected to the City of Zurich, Wollerau attracts wealthy taxpayers and has one of the lowest tax rates in the area.

However, "not all small and otherwise attractive jurisdictions have low tax rates", observes Professor Parchet. An example is given with the municipality of Vandoeuvres, in the Canton of Geneva, which had the highest median income yet had a tax rate very close to the median rate (data from 2013). The project therefore addresses the questions of why certain places emerge as tax havens, and what prevents other jurisdictions to use strategically their tax rate to become one.

There is also a historical interest behind this topic: in fact, as Parchet points out, "looking back in time, places known today as tax havens have not always been rich municipalities with low taxes."

What could be the reasons behind this’ Looking at the previous example of Wollerau, historical insight can indeed be helpful in understanding this trend: in the 1940s and ’50s, the village’s income distribution was in line with the Swiss average: then, over the years, it underwent several transformations, such as the redevelopment of rural land, important urban development, and the construction of the highway connection to Zurich, which could have helped the municipality to become and impose itself as a tax haven. Why did other municipalities not follow a similar transformation? What could have prevented other regions to do the same as Wollerau?

These preliminary historical factors show that several contextual variables will need to be taken into account when discussing this topic.

Fiscal data: a potential for the scientific community

About the data, it is worth mentioning that a core part of the project consists of building two large databases. On the one hand, the idea is to extend the data on average tax rates published by the Federal Tax Administration to all Swiss municipalities from 1945 to 2019. The other dataset will focus on income data: the project team will set up several measures of income distribution at the local level from the Federal income tax statistics - available from the 1940s - which was collected and digitised during two previous SNSF "Sinergia" projects.

This rather large amount of data clearly represents a rich source of information and there is therefore a lot of potential for further use and analysis. The final aim of Professor Parchet is to share this data with the public: indeed, at the end of the project, the public data provided by the Federal Tax Administration will be made openly accessible to the scientific community.

As previously seen, the project aims at examining which factors motivated, or precluded municipalities to become a tax haven. Although no clear-cut answer nor definite solution should be expected, additional aspects will need to be taken into account in this project, such as the interaction between fiscal policy and the highway network development policy, the accessibility to urban centres and the availability of the necessary infrastructures.

One further, fundamental reason behind this system is the fact that the Confederation gives complete autonomy in the field of taxation: in fact, in Switzerland, cantons can independently define their own tax rates. The same applies for municipalities, which are free to decide on communal tax rates - which need, however, to be in line with their cantonal fiscal regulation. Given this particularly liberal fiscal system, cantons, and municipalities alike, can compete with each other, trying to impose themselves as tax havens. Switzerland thus represents an ideal laboratory to study this phenomenon from different angles as many political, fiscal and historical elements interplay in its construction.

f
Share
Like
Related Stories
Administration
Federal Council mandates a review of the legal framework for space activities - 18.12.2020
RETHink project: preparing for the next 20 years - 17.12.2020