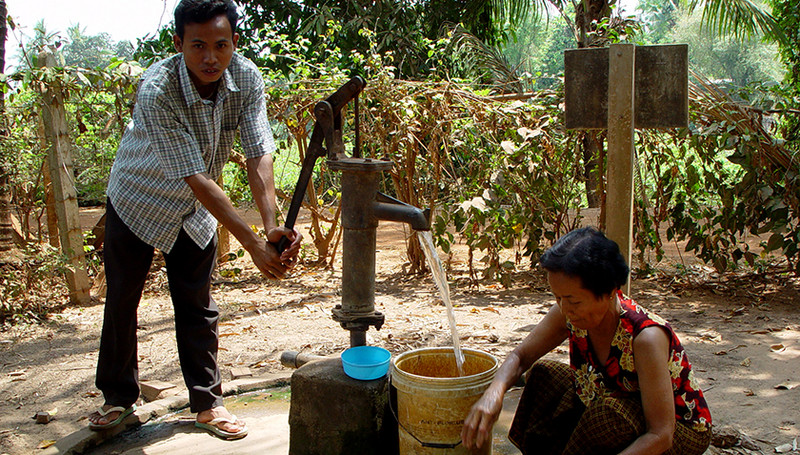 Naturally occurring (geogenic) arsenic contamination in groundwater is a problem of global significance, with noteworthy occurrences in large parts of the alluvial and deltaic aquifers in South and Southeast Asia. Computer models are necessary to analyse field observations, to unravel which chemical and physical processes play a role, and to predict the behaviour of arsenic within aquifers - namely where and when pollution may occur in the future. The research team led by Australian scientists from Flinders University, CSIRO and the University of Western Australia, together with their colleagues at the Swiss Federal Institute of Aquatic Science and Technology (Eawag), have recently published their study Geoscience.

Reconstructing the past to predict future arsenic behaviour

The research team selected a highly arsenic polluted site near Hanoi (Vietnam) to develop and test their computer model. As an initial step, the team integrated the experimentally determined tritium concentrations that had entered the groundwater from the atmosphere during the times of nuclear bomb testing, and its decay product helium, a noble gas, to reconstruct the velocity of the groundwater over the last 5 decades. Once the model simulations were able to match the concentrations experimentally measured, additional complexity was added to the model in order to simulate how arsenic was mobilised and transported in the Holocene aquifer.

At the study site, changes in groundwater flow occurred over the past 50 years since the city of Hanoi markedly increased the extraction of groundwater to satisfy its steadily increasing water demand. This is the main trigger for arsenic pollution in the aquifer as already shown in an earlier study https://www.eawag.ch/typo3/#_msocom_1 with Eawag participation. The computer modelling allowed the researchers to pinpoint the source of arsenic down to the river muds that are regularly deposited at the more slow-flowing zones of the Red River. The organic matter contained in those muds fuelled a biogeochemical reaction that led to the release of arsenic and its km-long transport into the aquifer underlying the Van Phuc village, a process that continues to this day. Employing their developed computer model in predictive mode the researchers were able to illustrate the interplay of four key factors on the evolution and longevity of arsenic release at surface water/groundwater interfaces, (i) the abundance of reactive organic matter; (ii) the abundance of iron oxides; (iii) the magnitude of groundwater flow; and (iv) river mud deposition rate.

Co-author Rolf Kipfer, a geochemist at Eawag, comments: "I am convinced that advanced groundwater models and state of the art tracer hydrology provide us with some of the tools needed to cope with the geogenic contamination of water resources."

Arsenic
Arsenic is one of the most common inorganic contaminants found in drinking water worldwide. This metalloid occurs as a natural component in many sediments. Where arsenic becomes dissolved into the groundwater this can cause extensive groundwater pollution. The inorganic salts of arsenic are tasteless and odourless, but highly toxic to humans. If ingested over long periods, even low concentrations can cause damage to health, including hyperpigmentation of the skin, hyperkeratosis on the palms and soles, disorders of liver, cardiovascular and kidney function, and various types of cancer. Problems arise from the fact that, firstly, arsenic concentrations can vary widely at the local level and, secondly, people in many areas are completely unaware of the risk because their groundwater wells have never been screened for arsenic. Concentrations below 10 µg/L are considered safe. This concentration is therefore recommended by the World Health Organization as a guideline value for arsenic in drinking water.

What factors influence our decision to stay or move? - 09.09
Related Stories
Chemistry

The mystery of the flexible shell - 10.09
Charging stations can combine hydrogen production and energy storage - 30.08