HIV epidemic: Successful use of self-tests in rural Africa 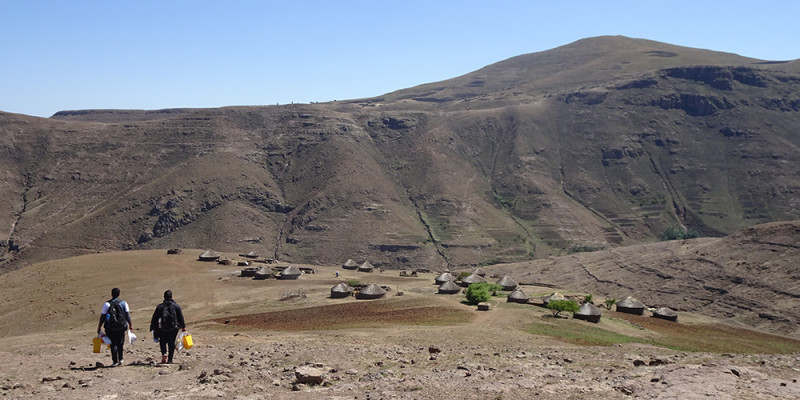 In Africa, health centers organize ’door-to-door’ campaigns to facilitate medical care access in remote regions. Now, for the first time, home visits have been combined with oral HIV self-tests. If these tests are positive, a blood test is taken by a specialist for the final diagnosis. The involvement of the village health advisors means that those affected can receive local care. (Image: University of Basel / Swiss TPH, Alain Amstutz)

Despite significant progress in prevention and therapy, millions of people still get infected with HIV every year. The main burden of HIV/AIDS falls on Africa. To contain the epidemic, innovative methods are needed to enable early diagnosis of all those affected. A Basel research group has now been able to significantly improve the success of "door-to-door" testing campaigns thanks to HIV self-tests.

In 2019, around 38 million people worldwide were infected with HIV. Two-thirds of those affected live in Africa, mainly south of the Sahara. To contain the epidemic, it is essential that all infections are treated with antiretroviral therapy to prevent the transmission of the virus. This, however, requires an early diagnosis. Especially in remote regions, which are a long way from clinics and test centers, access to HIV-testing remains a challenge.

In Lesotho, every fourth adult is infected with HIV. It is estimated that about 15 percent of the infections in the small mountainous country at the southern tip of Africa remain undetected and contribute to the further spread of HIV. For many Lesotho inhabitants, the nearest clinic is a few hours’ walk or an expensive cab ride away. To facilitate access to health services and HIV testing, health centers regularly organize "door-to-door" health campaigns. Studies have shown, however, that they reach only about 60 percent of the village population.

A team led by Niklaus Labhardt, professor at the University of Basel and research group leader at the Swiss Tropical and Public Health Institute (Swiss TPH), has now developed a strategy to improve test coverage by 20 percent. For the first time, the team combined home visits with HIV self-tests. If villagers are absent during the home visits, the campaign team leaves self-tests with instructional material in the local language. Village health advisors, who have been trained in using and evaluating the self-tests, collect the self-tests afterward.

The large-scale randomized study included over 150 villages with more than 7,000 inhabitants. The results of this simple approach speak for themselves: "At 81 percent, the HIV test rate in the entire population of the intervention group was 20 percent higher than in the control group," says biostatistician Dr. Tracy Glass of Swiss TPH.

In a sub-study, the research team analyzed the strategy among young people and supplemented the research with interviews. "Traditional HIV testing campaigns do not reach young people sufficiently, although the infection rate is high, especially among young women," explains first author Dr. Alain Amstutz of Swiss TPH. "In the intervention group, the self-testing resulted in a 36 percent higher proportion of young people knowing their HIV status than in the control group."

The number of AIDS deaths has been declining worldwide since 2010. At the same time, there were still 1.7 million new infections in 2019, half of them in Africa. "Especially in rural areas, an alternative to traditional health campaigns is needed to achieve optimal test coverage. Our strategy is another important building block to ending the HIV/AIDS epidemic in southern Africa," says Labhardt.

Amstutz A, Kopo M, Lejone TI, et al.
“If it is left, it becomes easy for me to get tested?: Use of oral self-tests and community health workers to maximize the potential of home-based HIV testing among adolescents in Lesotho.
Journal of the International AIDS Society (2020); doi: 10.1002/jia2.25563