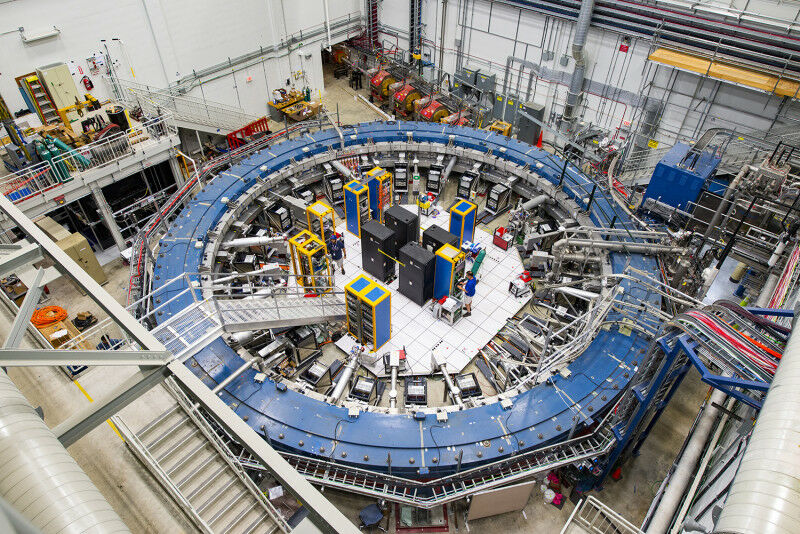 The US research laboratory "Fermilab" has published the eagerly awaited results of the experimental measurement of the so-called anomalous magnetic dipole moment of the muon. As members of the "Muon g-2 Theory Initiative", researchers from the University of Bern have calculated the same physical quantity theoretically in parallel, based on the Standard Model. The deviation of the experimental measurement from the theoretical calculation could indicate the existence of new particles.

The results of a new, highly precise experimental measurement of the so-called anomalous magnetic dipole moment of the muon were published today at the US research laboratory ’Fermilab’. The result was eagerly awaited, as a comparison between experimental measurement of the anomalous magnetic dipole moment and the theoretical calculation of the same quantity can provide clues as to whether the Standard Model of particle physics - which describes the known elementary particles and their interactions - may need to be extended. This could be done, for example, by adding new particles to the Standard Model.

For the comparison, researchers from the Albert Einstein Center for Fundamental Physics at the University of Bern, as members of the ’Muon g-2 Theory Initiative’, contributed to the most precise theoretical calculation of the anomalous magnetic dipole moment of the muon to date. The new experimental measurement at Fermilab has an outstanding accuracy of 0.46 ppm (parts per million). The difference of 4.2 standard deviations from the theoretical calculation of the quantity suggests that the standard model of particle physics may need to be extended. Both the experimental results and the latest theoretical calculations were presented at an online seminar.

For an elementary particle like the muon, the strength of the magnetic moment is expressed by the so-called gyromagnetic ratio ’g’. In a first approximation, this value of g for the muon is 2. ’However, in a precise experimental measurement of g, it was found seventy years ago that its exact value deviates slightly - in the per mil range - from 2’, explains Gilberto Colangelo, Director of the Albert Einstein Center and for Theoretical Physics at the University of Bern. The deviation of g from 2, i.e. ’g-2’, is the so-called anomalous magnetic dipole moment. This has been measured with increasing accuracy in recent decades.

The interest of such a measurement lies in the fact that g-2 can also be calculated theoretically with high accuracy: a discrepancy between theory and experiment would then be a clear indication that the Standard Model of particle physics must be extended - for example with new, previously unknown particles. However, the theoretical calculation of g-2 in the Standard Model is very complex. Progress has been made over the last seventy years through the meticulous work of many theorists. Five years ago, the ’Muon g-2 Theory Initiative’ was launched to further improve the accuracy of this calculation, with the aim of publishing the result before the new measurement. ’Last year we published the latest theoretical value for g-2 in a detailed report in the journal’, says Gilberto Colangelo. Colangelo and Martin Hoferichter, also a professor of theoretical physics at the University of Bern, are both members of the steering committee of the Muon g-2 Theory Initiative.

Soon physics beyond the Standard Model?

The latest measurement at Fermilab has a similar precision to the last measurement, which was also carried out twenty years ago in the USA at Brookhaven National Laboratory. The average of these two measurements reaches a precision of 0.35 ppm. The combined experimental results from Fermilab and Brookhaven show a deviation from the current theoretical calculations of 4.2 standard deviations. At three standard deviations, physicists usually speak of ’hints’, at five standard deviations one can speak of a ’discovery’. The new result is the first in a planned series of measurements from the Fermilab experiment. The ultimate goal of the Fermilab experiment is to increase the accuracy of the measurements by a factor of four (0.14 ppm). In parallel, the ’Theory Initiative’ will continue to work on improving the precision of the theoretical calculation.

If, by improving the measurements and the theoretical calculations, the deviation is confirmed and potentially even greater, the current clear sign of ’physics beyond the Standard Model’ can hopefully be declared a discovery,’ says Gilberto Colangelo.

Albert Einstein Center for Fundamental Physics
The Albert Einstein Center for Fundamental Physics (AEC) was founded in 2011. Its aim is to promote research and teaching in fundamental physics at the highest level at the University of Bern. The focus is on experimental and theoretical particle physics and its applications (e.g. medical physics), as well as on related spin-off and outreach activities.

The AEC was founded with the collaboration of the Institute for Theoretical Physics (ITP) and the Laboratory for High Energy Physics (LHEP) of the University of Bern. With over 100 members, the AEC is one of the largest university groups of researchers working in the field of particle physics in Switzerland and a strong player at the international level.

In September 2019, Fermilab and the University of Bern signed an agreement on their future collaboration on neutrino experiments. This is the first agreement between a Swiss university and Fermilab, one of the world’s leading particle physics laboratories, which is now heavily involved in neutrino research.

The Bernese researchers’ contribution to the scientific collaboration includes three projects: MicroBooNE, SBND and the Deep Underground Neutrino Experiment (DUNE), which is considered the ultimate neutrino observatory in the world.