Hearing-impaired people whose auditory nerve is still intact can often be helped with a cochlear implant. But inserting the implant into the inner ear is not without risks, as facial nerves can be damaged in the process. researchers have developed a novel smart drill that minimizes the risk by automatically shutting off when it comes near nerves.

Methods of Advanced Manufacturing can lead to remarkable advances in surgery. A group of researchers led by Stefan Weber of the University of Bern’s ARTORG Center for Biomedical Engineering Research has developed a robot that can insert cochlear implants more gently than a surgeon. "When a surgeon performs the procedure, he has to remove relatively large areas of the skull bone," Weber explained in an article in the NZZ. Only when he can see where the nerves are located will he use the drill, he said. The robot, on the other hand, drills only a 1.8 millimeter wide channel, the course of which is determined on the basis of a previously created CT image.

But the surgeons must not drill at random, because the hole for the cochlear implant must lie exactly between the taste nerve and the facial nerve. At one point, these nerves are only three millimeters apart and must not be damaged under any circumstances. Until now, surgeons proceeded like this: Just before the constriction, they stopped drilling and irritated the facial nerve with an electric tip. If the twitching in the patient’s face is not too strong, drilling can continue carefully.

The physicians at the ARTORG Center approached Empa with the question: Couldn’t we develop a drill that would also electrically stimulate the facial nerve, i.e. a drill that would indicate its position in the patient’s skull? Kerstin Thorwarth from Empa’s Surface Science and Coating Technologies lab went to work. Together with a colleague, she developed a drill with a conductive tip as part of a master’s thesis and an Innosuisse project. The conductive and insulating hard coatings of titanium nitride (TiN) and silicon nitride (Si3N4) were applied to the drill tip by magnetron sputtering. For this, the individual windings of the drill had to be covered with special masks.

"The smart drill for cochlear surgery could also be used for spinal surgery, for example," says project leader Stefan Weber.

In an implant, an external speech processor translates the sound waves arriving at the microphone into digital signals. These are sent to the electrodes in the cochlear implant. To insert the electrode implant into the cochlea, a narrow channel is drilled. It measures 1.8 millimeters in diameter and runs 0.5 millimeters between each of the facial nerves and taste buds and past the ossicles to the cochlea. Illustration: NZZ-Infografik

Now the researchers are working with the surgeons to find an industrial partner who can manufacture the smart drill in accordance with the legal requirements for medical devices. "This will require further significant development effort," says Weber. And that still needs to be funded.

Related Stories
Materials Science
Researcher with heart and soul - and a soft spot for X-ray analysis - 06.02

With nanoeffects towards new joining processes - 02.02 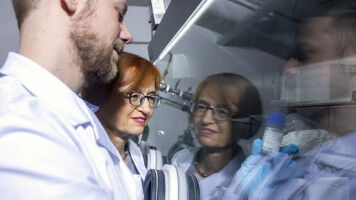