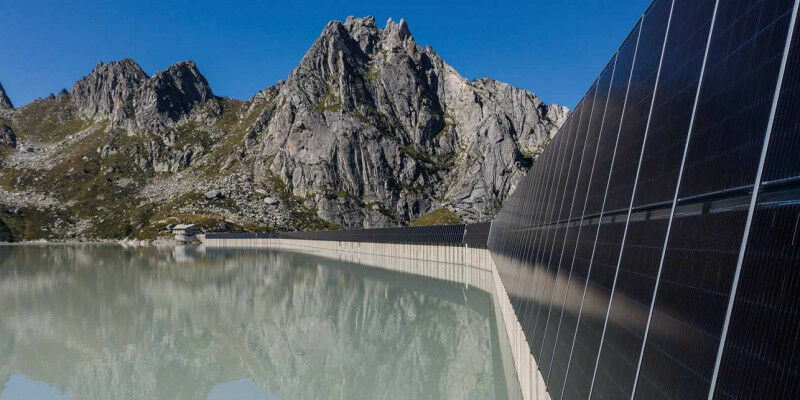 Solar plants in the High Alps can produce electricity in summer and winter. In the photograph: solar panels at the Albigna dam in Graubünden.

An ETH risk researcher has concluded that Energy Strategy 2050 doesn’t work. The Energy Science Center at ETH Zurich disagrees: extensive research shows that the energy transition is feasible and makes sense, writes Gabriela Hug together with her ESC colleagues.

Earlier this month, the Neue Zürcher Zeitung newspaper reported that huge dependence on electricity imports in winter was imminent if the Swiss federal government went through with the Energy Strategy including nuclear phase-out. A non-peer-reviewed working paper by ETH risk researcher Didier Sornette served as a reference for these statements. That paper forecasts an extremely high electricity import ratio of 69 percent for January 2050. There is nothing new about Switzerland importing electricity in winter. The research community has looked extensively into the power generation gap in winter and reaches different conclusions. Our reply aims to explain why the assumptions in that paper1 are not correct and lead to estimates of future Swiss import demand that are much higher than the modelling performed in our competence centre shows. We have outlined our three main points below.

First, the paper uses an extremely simplistic methodology that does not do justice to the complexity of the energy system. It merely scales up electricity consumption and production from 2017 by 37 percent for 2050. This completely ignores shifts in consumption and generation patterns. It is also entirely unclear why the paper refers to a single baseline year (2017) when production and demand fluctuate greatly from year to year. The justification that more recent data on electricity consumption and production was not available is simply wrong. There is publicly available data up to 2022.

Second, the potential for seasonal flexibility in domestic hydropower plants is greatly underestimated. The paper simply extrapolates today’s hydropower production patterns into the future, even though detailed models and experience show that these can be adjusted for winter production (keyword winter reserve). In addition, there is a significant shortcoming in the model: although it similarly scales up the electricity consumption of pumped-storage plants, it apparently neglects to take into account the power these plants feed back into the grid over the same period. It doesn’t take long to see that there is something amiss with this calculation.

Third, the study assumes that additional installed capacity up to 2050 will almost exclusively comprise photovoltaics - and indeed PV systems that aren’t optimised for winter solar radiation. It omits all other aspects, such as seasonal storage technologies or imports of synthetic fuels, where great progress is being made. Instead, it assumes an extremely simplistic take on batteries, even though these were never intended for seasonal storage.

Professor, Power Systems Laboratory and Chair of the Managing Board of the Energy Science Center (ESC) at ETH Zurich.

Research clearly shows the importance of a balanced technology mix, as is also envisaged in the Energy Strategy. This is where the study really falls down: if you exclude all other technologies bar photovoltaics, it’s easy to project an extreme shortage situation. But (fortunately) the Energy Strategy does nothing of the sort.

Interestingly, the paper doesn’t even calculate the touted new construction of nuclear power plants as an alternative scenario; instead, the authors simply conclude that this must be the solution, given that it is the last alternative. Regardless of the fact that the construction of a new power plant is associated with countless uncertainties in terms of costs, construction time and social acceptance, this strategy would also lead to a cluster risk, since the failure of a power plant would in turn leave a huge gap in supply. I would like to emphasise here that, from a scientific point of view, it makes no sense to exclude a technology completely; we are not doing that. Instead, our calculations at the ESC show that the Energy Strategy has by no means failed and that it makes possible the implementation of a reliable, economical and sustainable energy system - even without building any new nuclear power plants.

Broad consensus on the energy transition

The path to a secure and sustainable power supply is not easy - researchers at ETH and throughout Switzerland are busy working to develop models and scenarios based on facts and data and to provide viable solutions. The result of this research can be summarised as follows: the cheapest and most reliable way to guarantee electricity generation in Switzerland is through a mix of different renewable energy sources together with flexible resources such as various storage facilities, gas-fired power plants (if necessary, running on synthetic gas) or, for example, geothermal energy and a functioning exchange with neighbouring countries. In this process, we must be aware that Switzerland has never been energy self-sufficient: for example, we have always imported oil, which accounts for a large part of our energy consumption. The Energy Strategy takes these aspects into account.

So the fact that there is agreement here has nothing to do with a desire on the part of researchers to be politically compatible with any particular positions - as we are accused of in the article. It is simply the result of serious science.

Gabriela Hug co-authored this text with Christian Schaffner, Executive Director of the ESC, and Tobias Schmidt, Professor of Energy and Technology Policy, member of the ESC and Director of the Institute for Science, Technology and Policy (ISTP) at ETH Zurich. The article first appeared as a reply in the NZZ and has been slightly expanded.