Foot insoles from the 3D printer 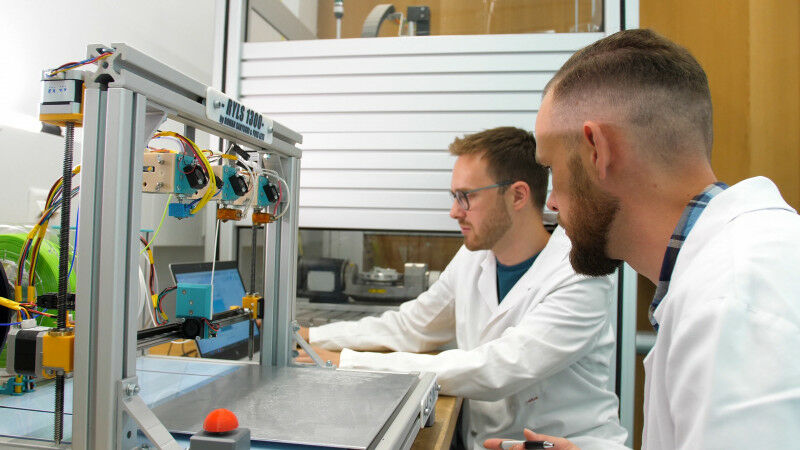 Two students from the School of Life Sciences FHNW have developed a new type of 3D printer in close collaboration with the orthopedic company Orthopodo Malgaroli. With this, Orthopodo can now print custom-fit orthopedic foot orthoses for its customers quickly, easily and in a resource-saving manner. The novelty here is that, for the first time, foot orthotics can be printed softer in certain areas and firmer in others, depending on customer requirements, using a multi-material printing process. This serves to ensure optimum foot health in everyday life, during sports, and for medically complex needs.

Yves Letz and Roman Santschi, two medical informatics and medical technology students, respectively, at the School of Life Sciences of the FHNW have developed a 3D printer in close collaboration for and with the industry partner Orthopodo Malgaroli, which can produce foot orthoses for individual patients in-house via 3D printer. Fast, easy, and resource-efficient. In a single visit to the orthopedist, the measurement data can now be collected, the corresponding foot orthoses individually designed and printed for a precise fit. Customers can watch the production process and take the foot orthotics home with them.

The special feature of the 3D printer produced by Yves Letz and Roman Santschi is that it can print with several different flexible materials, so that the foot insoles are relievingly soft in certain places and firmer in others, depending on the customer’s needs. This is very important, for example, in the production of foot orthotics for diabetes patients, who lack sensitivity in their feet. This means that they do not feel the vulnerable areas, which can lead to pressure points and ultimately to poorly healing wounds or even amputations. Foot insoles, which are very soft at the endangered area and thus relieve the pressure, are helpful here. Until now, the production of foot insoles with different degrees of hardness was only possible through complex milling processes and the manual application of so-called inlays. "Custom-designed and printed shoe insoles also ensure optimal foot health in everyday life and sports, as the forces acting on the foot can be taken into account," says Domenic Stamm, movement scientist ETH at Orthopodo Malgaroli.

"In order to be able to print the different hard materials needed for such a foot insert, we have developed and installed special print heads," say the two tinkerers Yves Letz and Roman Santschi. "In addition, we have developed a tool change system with which the printer can change the different print heads fully automatically. Now that we see that our prototype has proven itself in practice, we are looking for industrial partners for the further development, production and distribution of the 3D printer," the two young researchers continue. 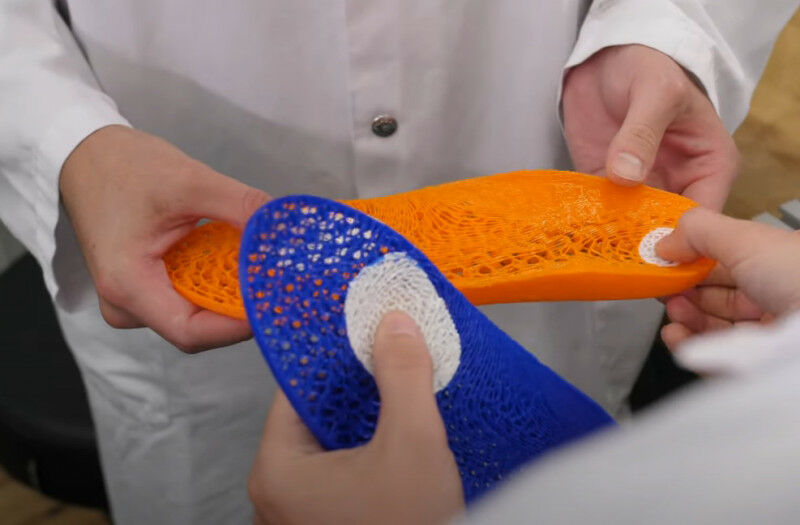 Until now, orthopedic foot orthoses at Orthopodo Malgaroli were designed to fit the patient’s needs precisely using a CAD, produced using a CNC milling machine, and then adjusted and finished by hand. "Production using a CNC mill is a dusty, noisy and labor-intensive affair," says Mario Malgaroli, owner of Orthopodo. "The 3D printer developed by Roman and Yves now gives us the possibility to produce orthopedic foot orthoses quickly, independent of location and in a resource-saving way," Mario Malgaroli is pleased to report. "The potential use of this 3D printer is great," continues Mario Malgaroli. "In the future, it could be used not only by us, but also by doctors’ offices, podiatrists, physiotherapists, and shoe and sports stores.

"The collaboration with the Institute for Medical Technology and Medical Informatics at the FHNW School of Life Sciences showed us what enormous knowledge is available there. We were understood right from the start and realized that these are also practitioners with a scientific background who optimally complement our know-how. The project was an important step on the way to realizing our vision of modernized orthopedics. However, there is still a great deal of untapped potential, which we would like to further exploit together with the School of Life Sciences FHNW. A joint follow-up project supported by the Aargau Research Fund is already underway," says a delighted Mario Malgaroli.

"The close collaboration of the university with industrial companies such as Orthopodo Malgaroli enables the use of synergies that benefit everyone involved. The students, the industrial partners, but ultimately above all the patients, who can be actively helped by the advances in medical technology," says Prof. Erik Schkommodau, Head of the Institute for Medical Technology and Medical Informatics at the FHNW School of Life Sciences.

New treatment of hepatic disorders of abnormal lipid deposition - 25.01
Agreement between IOR and BIMINI Biotech to develop new drugs - 23.01
This site uses cookies and analysis tools to improve the usability of the site. More information. |