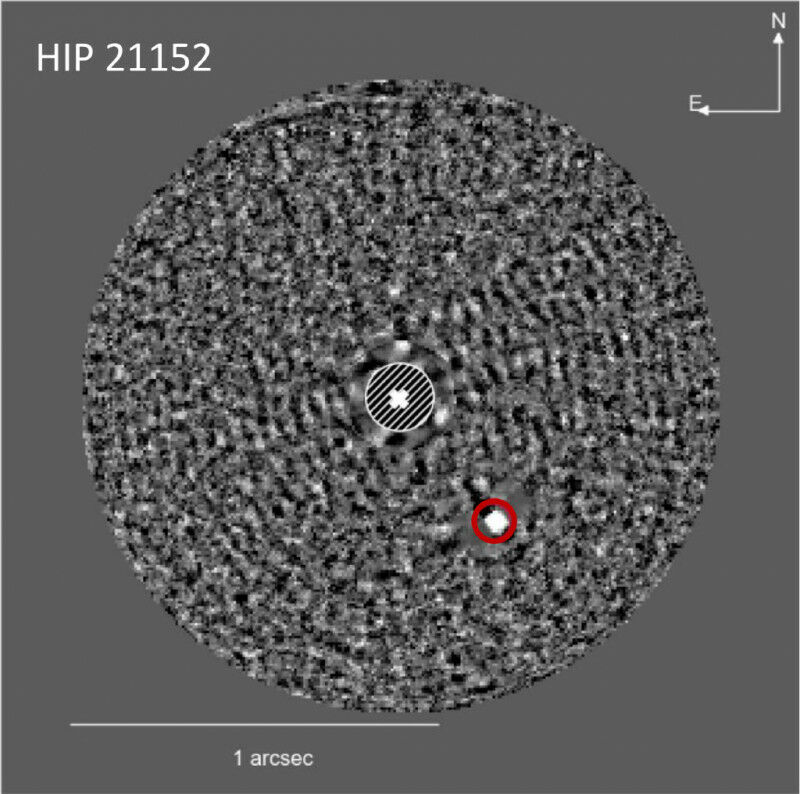 Image of the brown dwarf (in the red circle) discovered around the star HIP 21152, obtained with the Very Large Telescope SPHERE instrument. © M. Bonavita et al., MNRAS, July 2022, doi.org/10.1093/mnras/stac1250
Brown dwarfs, mysterious objects that straddle the line between stars and planets, are essential to our understanding of both stellar and planetary populations. However, only 40 brown dwarfs could be imaged around stars in almost three decades of searches. An international team led by researchers from the Open University and the University of Bern directly imaged a remarkable four new brown dwarfs thanks to a new innovative search method.

Brown dwarfs are mysterious astronomical objects that fill the gap between the heaviest planets and the lightest stars, with a mix of stellar and planetary characteristics. Due to this hybrid nature, these puzzling objects are crucial to improve our understanding of both stars and giant planets. Brown dwarfs orbiting a parent star from sufficiently far away are particularly valuable as they can be directly photographed - unlike those that are too close to their star and are thus hidden by its brightness. This provides scientists with a unique opportunity to study the details of the cold, planet-like atmospheres of brown dwarf companions.

However, despite remarkable efforts in the development of new observing technologies and image processing techniques, direct detections of brown dwarf companions to stars have remained rather sparse, with only around 40 systems imaged in almost three decades of searches. Researchers led by Mariangela Bonavita from the Open University and Clémence Fontanive from the Center for Space and Habitability (CSH) and the NCCR PlanetS at the University of Bern directly imaged four new brown dwarfs as they report in a study that has just been published in the journal Monthly Notices of the Royal Astronomical Society MNRAS. This is the first time that multiple new systems with brown dwarf companions on wide orbital separations have been announced at the same time.

"Wide-orbit brown dwarf companions are rare to start with, and detecting them directly poses huge technical challenges since the host stars completely blind our telescopes", says Mariangela Bonavita. Most surveys conducted so far have been blindly targeting random stars from young clusters. "An alternative approach to increase the number of detections is to only observe stars that show indications of an additional object in their system", explains Clémence Fontanive. For example, the way a star moves under the gravitational tug of a companion can be an indicator of the existence of that companion, whether it is a star, a planet or something in between.

"We developed the COPAINS tool which predicts the types of companions that could be responsible for observed anomalies in stellar motions", Clémence Fontanive continues. Applying the COPAINS tool the research team carefully selected 25 nearby stars that seemed promising for the direct detection of hidden, low-mass companions based on data from the Gaia spacecraft of the European Space Agency (ESA). Using then the SPHERE planet-finder at the Very Large Telescope in Chile to observe these stars, they successfully detected ten new companions with orbits ranging from that of Jupiter to beyond that of Pluto, including five low-mass stars, a white dwarf (a dense stellar remnant), and a remarkable four new brown dwarfs. 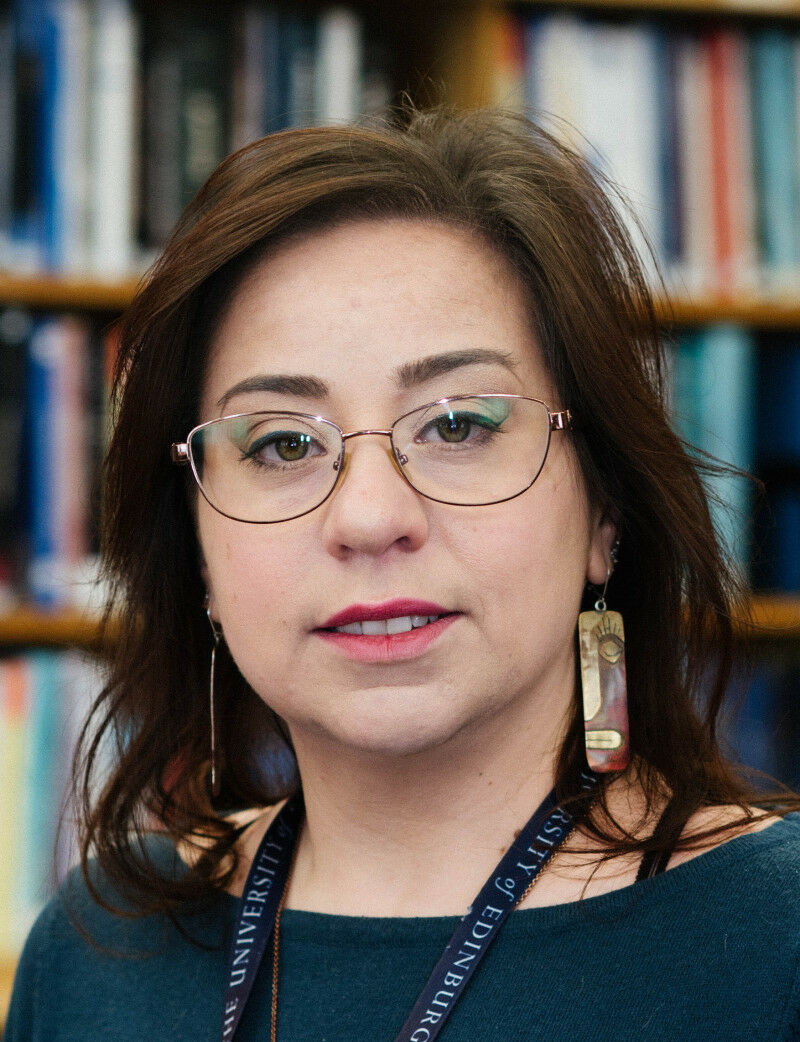 "These findings significantly advance the number of known brown dwarfs orbiting stars from large distances, with a major boost in detection rate compared to any previous imaging survey", as Mariangela Bonavita explains. While for now this approach is mostly limited to signatures from brown dwarf and stellar companions, future phases of the Gaia mission will push these methods to lower masses and allow for the discovery of new giant exoplanets. Clémence Fontanive adds: "On top of having so many new discoveries in one go, our program also demonstrates the power of these search strategies."

"This result was only possible because we believed that, when combining space and ground-based facilities to directly image exoplanets, the whole is greater than the sum of its parts. We hope that this will be the start of a new era of synergy between different instruments and detection methods", Mariangela Bonavita concludes.

See also the interview with Clémence Fontanive in the online magazine "uniaktuell":

The advocate for puzzling astronomical objects

Brown dwarfs are puzzling astronomical objects that are heavier and hotter than planets, but lighter and colder than stars. A research team led by Clémence Fontanive from the University of Bern has recently directly imaged four new of these mysterious celestial bodies. In this interview, the astrophysicist explains why brown dwarfs are important to our understanding of stars and planets.

Center for Space and Habitability (CSH)

The mission of the Center for Space and Habitability (CSH) is to foster dialogue and interactions between the various scientific disciplines interested in the formation, detection, and characterization of other worlds within and beyond the Solar System, the search for life elsewhere in the Universe, and its implications for disciplines outside of the sciences. The members, affiliates, and collaborators include astronomers, astrophysicists and astrochemists, atmospheric, climate and planetary scientists, geologists and geophysicists, biochemists and philosophers. The CSH is home to the CSH and Bernoulli Fellowships, which host young, dynamic and talented researchers from all over the world to conduct independent research. It actively run a series of programs to stimulate interdisciplinary research within the University of Bern including collaborations and/or open dialogue with Medicine, Philosophy and Theology. The CSH has an active tie to the Centre for Exoplanets & Habitability of the University of Warwick. It is active in implementing gender equality measures and public outreach. https://www.csh.unibe.ch/

Bernese space exploration: With the world’s elite since the first moon landing

When the second man, "Buzz" Aldrin, stepped out of the lunar module on July 21, 1969, the first task he did was to set up the Bernese Solar Wind Composition experiment (SWC) also known as the "solar wind sail" by planting it in the ground of the moon, even before the American flag. This experiment, which was planned, built and the results analyzed by Johannes Geiss and his team from the Physics Institute of the University of Bern, was the first great highlight in the history of Bernese space exploration. 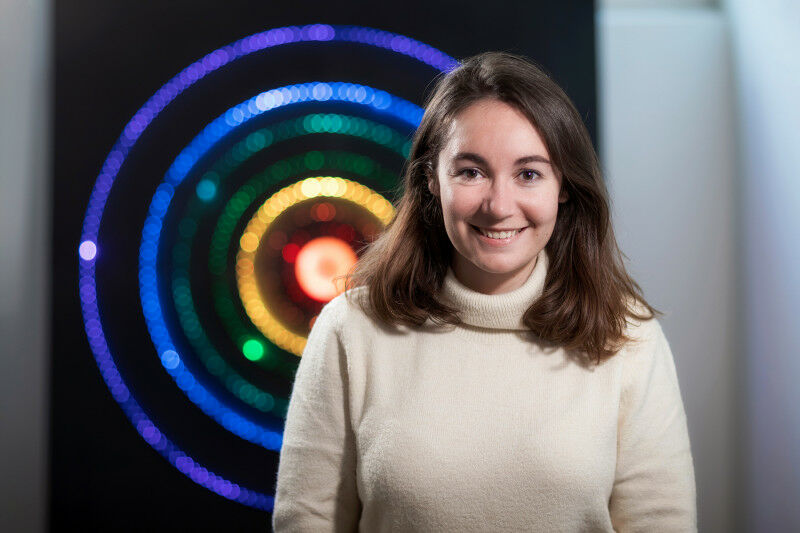 Ever since Bernese space exploration has been among the world’s elite. The numbers are impressive: 25 times were instruments flown into the upper atmosphere and ionosphere using rockets (1967-1993), 9 times into the stratosphere with balloon flights (1991-2008), over 30 instruments were flown on space probes, and with CHEOPS the University of Bern shares responsibility with ESA for a whole mission.

The Open University (OU) is the largest academic institution in the UK and a world leader in flexible distance learning. Since it began in 1969, the OU has taught more the OU has taught more than 2.2 million students worldwide and currently has over 205,000 students.
Seventy per cent of directly registered students are in full-time or part-time employment, and 75 FTSE 100 companies have sponsored staff to take OU courses.
In the latest assessment exercise for university research (Research Excellence Framework, 2021), over three quarters (76%) of OU research was assessed as 4 or 3 star - the highest ratings available, awarded to research that is world-leading or internationally excellent. The OU’s commitment to research and societal impact is recognized too with 82% of its research impact assessed to be world-leading or internationally excellent.

Tumultuous migration on the edge of the Hot Neptune Desert - 18.01