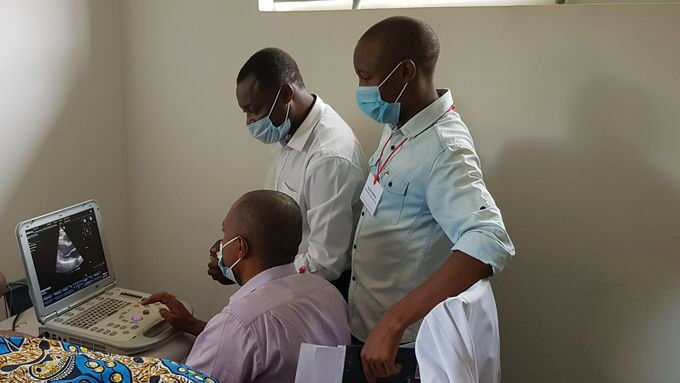 The researchers tested a diagnostic algorithm including point-of-care ultrasound to better diagnose TB.

Tuberculosis (TB) remains one of the world’s biggest infectious disease killers. It is a complicated disease to diagnose and treat, even more so when it affects organs outside of the lung. A clinical trial in Tanzania tested a diagnostic algorithm including point-of-care ultrasound to increase the proportion of correctly managed patients. While the proportion of correctly managed patients could not be increased, the study indicates that this diagnostic algorithm could be a feasible approach to increase confirmation of TB. This is the first clinical randomized controlled trial successfully conducted at the St. Francis Referral Hospital in Ifakara, highlighting the excellent clinical research knowhow and collaboration between the Ifakara Health Institute, Swiss TPH, and other partners. The results were published in the peer-reviewed journal Clinical Infectious Diseases.

Tuberculosis (TB) is an infectious disease caused by Mycobacterium tuberculosis. About 10 million people fall ill every year; most of them are in lowand middle-income countries. 1.5 million people die from TB each year - making it one of the world’s top infectious killer. People living with HIV are particularly at risk.

If left untreated, up to 50% of TB patients die. Diagnosis and treatment of TB is complex, especially when the bacteria attacks organs outside the lung. This form of disease is known as extrapulmonary TB (EPTB). It is estimated that 25% of all tuberculosis cases are EPTB cases. Since microbiological tests have a low to moderate sensitivity, and are not always available, patients with suspected EPTB are mostly treated empirically. This means they are prescribed anti-tuberculosis drugs without microbiological confirmation of M. tuberculosis.

-We know that in sub-Saharan Africa, approximately 50% of patients who receive anti-tuberculosis drugs actually suffer from another condition,- said Martin Rohacek, Medical Doctor and Project Leader at Swiss TPH, the Ifakara Health Institute (IHI), and the St. Francis Referral Hospital in Ifakara. -Thus, the diagnosis of the real diseases mimicking TB such as heart failure or cancer is delayed, or not diagnosed at all. This worsens outcomes of the patients.-

The randomized controlled two-center trial conducted in Ifakara, Tanzania, and in the Mwananyamala Regional Hospital in Dar es Salaam tested -extended Focused Assessment of Sonography for HIV and Tuberculosis- (eFASH) in combination with other tests such as Xpert MTB/Rif, Adenosine Deaminase, and chest X ray. The researchers wanted to see whether this diagnostic algorithm would increase the proportion of correctly managed patients with suspected EPTB. The point-of-care ultrasound protocol eFASH is easy to learn and takes only about 15 minutes.

-We have seen in previous observational studies that point-of-care ultrasound has a low to moderate diagnostic accuracy for definite TB, but might help exclude TB when combined with absence of fever, negative microbiology, and a normal chest X ray,- said Robert Ndege, principle investigator of the study and Medical Doctor at IHI and the St Francis Referral Hospital.

The study was the first randomized controlled trial successfully conducted at the St. Francis Referral Hospital, highlighting the excellent clinical research knowhow and collaboration of the Ifakara Health Institute, Swiss TPH and other partners. The results were published recently the peer-reviewed journal Clinical Infectious Diseases.

Building upon clinical services in chronic diseases and continuous training of staff alongside a gradual setup of clinical research, a clinical platform was established within the longstanding collaboration of Swiss TPH, the Ifakara Health Institute- the St. Francis Referral Hospital and the University Hospital Basel. The Ifakara Clinic platform represents a strong capacity building momentum in the three areas of service, research and training.

Reducing the Burden of Schistosomiasis for Young Children in Africa - 30.11.2022