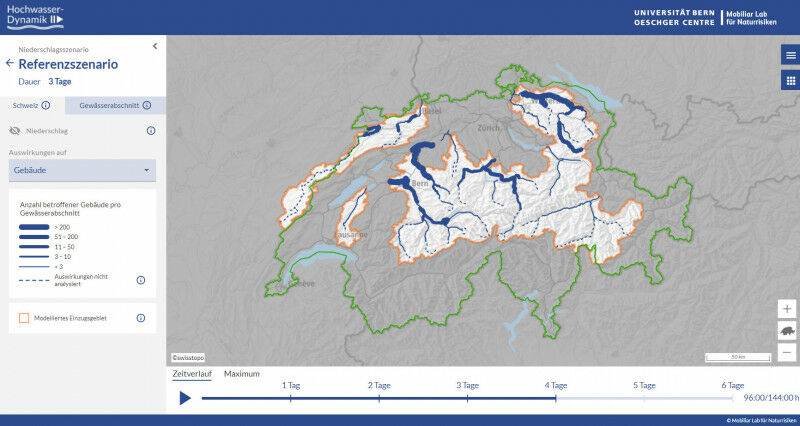 Screenshot of the flood tool with a regional estimate of affected buildings in an extreme precipitation scenario. Mobiliar Lab of the University of Bern

The Mobiliar Lab for Natural Risks of the University of Bern shows that far greater floods are possible in Switzerland than previously assumed. These extreme events underscore the importance of supra-regional emergency planning. A new modeling tool is designed to help manage large floods. 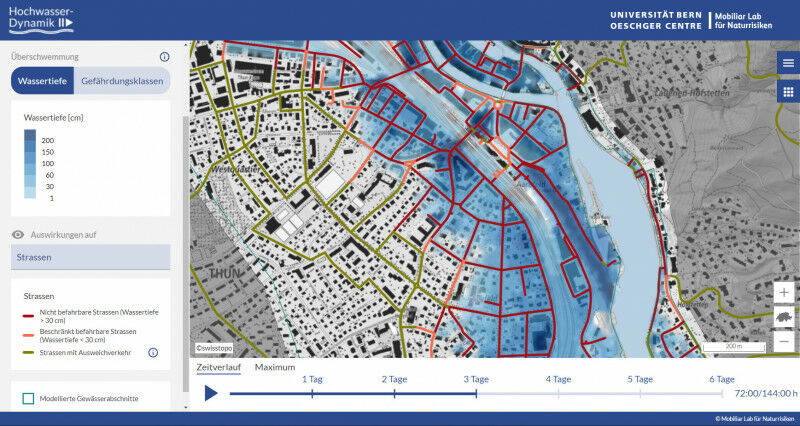 Screenshot of the flood tool with worst case scenario in Thun, related to estimated water depth and impact on roads. Mobiliar Lab of the University of Bern

Even experts could not have imagined the extent of these floods: Nobody had expected the devastating storms of summer 2021 in Germany. This shows that floods are possible that massively exceed the previous range of experience - also in Switzerland. We have to think the unthinkable: extreme precipitation scenarios that have never occurred before are possible," says Olivia Romppainen, professor of climate impact research and co-director of the Mobiliar Lab.

Mobiliar Lab has now determined the effects of extreme flood scenarios in Switzerland with the help of a new modeling tool. The calculations show that in an extreme precipitation scenario, flooding occurs in a very large number of rivers within a very short time. At different locations, the damage occurs practically simultaneously and skyrockets. In such a worst-case scenario, the extreme floods would result in building damage of almost 6 billion Swiss francs, far exceeding the total economic damage of 3 billion Swiss francs caused by the 2005 flood of the century in Switzerland. Add to this: If extreme floods occur simultaneously, rescue organizations will face massive challenges. There may be major logistical and personnel problems. 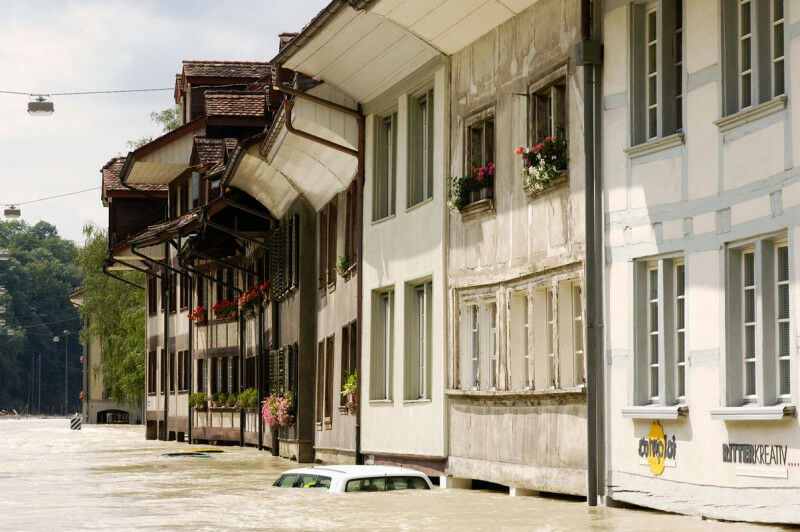 New view of the dynamics of natural hazards

’For our calculations, we started from precipitation scenarios that are extreme but physically plausible,’ says Andreas Zischg, professor of human-environment systems modeling and co-leader of Mobiliar Lab. ’They’ve never happened before, but they could occur. If so, we would be dealing with a hydrological earthquake, i.e., an event with a large spatial impact.’ The focus of the flood tool is not on impacts in individual communities, as has been the case in the past when considering natural hazards. For the first time, the combined consequences for several river basins in large parts of Switzerland are considered.

As the investigation of nine extreme precipitation and flood scenarios for the whole of Switzerland shows, the tool delivers research results of great social relevance. For example, the Mobiliar Lab simulations show for the first time the indirect effects of flooding: Extreme flooding interrupts transport links, among other things. In a worst-case scenario, this leads to detours covering 3,000 kilometers - with corresponding consequences for people commuting and supply chains. The extended preventive measures in the event of flooding therefore include the planning of possible alternative routes in the event of flooding. 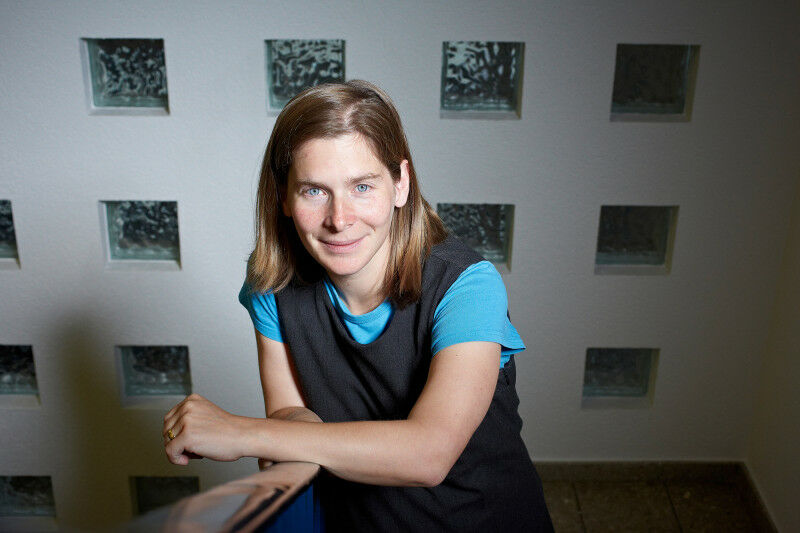 If major damage occurs in many places at the same time, this leads to a complex and difficult situation to manage within a short time," explains Andreas Zischg. Therefore, a coordinated supra-regional emergency planning is absolutely necessary in order to be prepared for floods of previously unimaginable dimensions. The tool is now intended as an Ébungstool for civil protection and for blue-light organizations to help improve emergency planning and mitigate damage in the event of a disaster.

The Mobiliar Lab for Natural Risks at the University of Bern

The Mobiliar Lab for Natural Risks is a joint research initiative of the Oeschger Center for Climate Research at the University of Bern and Mobiliar. It primarily investigates the processes involved in hail, floods and storms and the damage they cause. The Mobiliar Lab works at the interface of science and practice and aims to produce results with high benefits for the general public. Mobiliar’s support is part of the social commitment of the Mobiliar Cooperative. 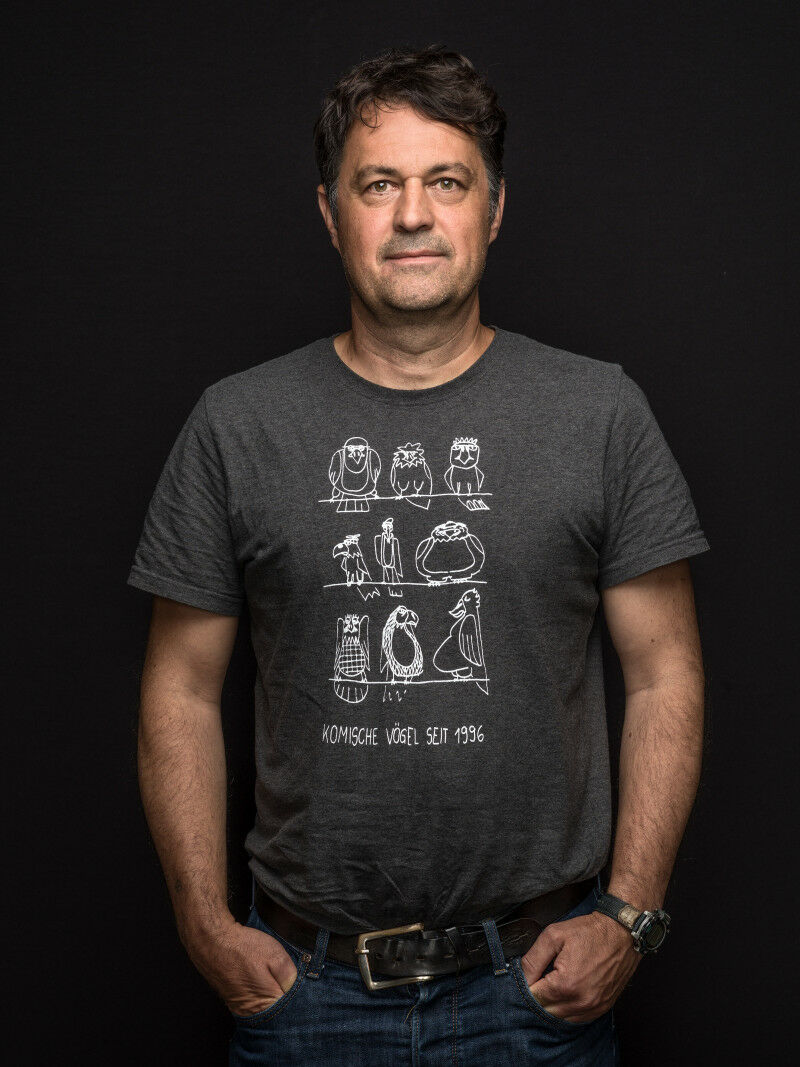