Monitoring the Matterhorn with millions of data points
A unique project is linking in-situ measurements with natural hazards research. For the past ten years, a network of wireless sensors on the Matterhorn's Hörnli ridge has been constantly streaming measurement data on the condition of steep rock faces, permafrost and prevailing climate. The project leader, Jan Beutel, reviews progress to date.
Environment - Earth Sciences - 24.07.2019

Volcanoes shaped the climate before humankind
Five large volcanic eruptions occurred in the early 19th century. They caused cooling and - as a study led by the University of Bern shows - to drying in the monsoon regions and glaciers growing in the Alps. The study shows that the pre-industrial climate was not constant: if one takes this cold period as the starting point for current global warming, the climate has already warmed up more than assumed in the current discussions.
Environment - Earth Sciences - 03.07.2019

Influence in absentia
The preferred food of pike in shallow lakes in Denmark and Sweden is roach. Seven in ten fish found by researchers in the stomachs of pike were roach - and the numbers tended to be even higher in wintertime. The roach that pike ate in lakes with tributary or outflowing rivers were, admittedly, smaller during the winter, and became somewhat thinner as winter went on.
Earth Sciences - 02.07.2019

When Lake Zurich guarantees the best cool-down
Two years ago, researchers from Eawag and EPFL posted a publicly accessible 3D model on www.meteolakes.ch * that uses current and forecast data from MeteoSchweiz, hydrological data from the Federal Office for the Environment and satellite data to map lake water temperatures. The temperatures are calculated for different depths and with a temporal resolution of three hours.
Environment - Earth Sciences - 23.05.2019

Source of new CFC emissions discovered
Since 2013, annual emissions of the banned chlorofluorocarbon CFC-11 have increased by around 7,000 metric tons from eastern China, according to a new study by an international team of scientists including Empa researchers, published in «Nature» today. The new discovery follows a finding in 2018 that emissions of this very important ozone-depleting substance had increased.
Life Sciences - Earth Sciences - 15.04.2019

Necrophagy: a means of survival in the Dead Sea
UNIGE researchers have found that bacteria can survive in the sediments of the Dead Sea at a depth of over 400 metres in spite of extreme conditions. Studying organic matter in sediments helps shed light on the distant past. What was the climate like? What organisms populated the Earth? What conditions did they live in? Researchers from the University of Geneva (UNIGE), Switzerland, and the University of Lyon, France, have examined the sediments in the Dead Sea, where the salinity is without compare, making it one of the most hostile environments on the planet.
Earth Sciences - 08.04.2019

Melting Glaciers Causing Sea Levels to Rise at Ever Greater Rates
Melting ice sheets in Greenland and the Antarctic as well as ice melt from glaciers all over the world are causing sea levels to rise. Glaciers alone lost more than 9,000 billion tons of ice since 1961, raising water levels by 27 millimeters, an international research team under the lead of UZH have now found.
Earth Sciences - 22.03.2019

How fluid viscosity affects earthquake intensity
A young researcher at EPFL has demonstrated that the viscosity of fluids present in faults has a direct effect on the force of earthquakes. Fault zones play a key role in shaping the deformation of the Earth's crust. All of these zones contain fluids, which heavily influence how earthquakes propagate.
Environment - Earth Sciences - 18.03.2019

Researchers make a key discovery on how alpine streams work
An EPFL study has showed that until now, scientists have been substantially underestimating how quickly gases are exchanged between mountain streams and the atmosphere. Based on research in the Swiss cantons of Vaud and Valais, an EPFL laboratory has shed new light on the role of mountain streams to emit greenhouse gases.
Earth Sciences - Health - 28.01.2019

New method to determine how safe buildings are after an earthquake
EPFL scientists have developed a new method for evaluating building safety after an earthquake, helping residents return to their homes more quickly. Deciding when it's safe for a building's residents to move back in after an earthquake is a major challenge and responsibility for civil engineers. Not only do they have to evaluate whether the building could collapse, but also whether it could withstand aftershocks of the same magnitude.
Environment - Earth Sciences - 29.11.2018

The polar regions communicate via postcards and text messages
A new study found two types of climatic connection between the North Atlantic and Antarctica. One is a rapid atmospheric channel and the other a much slower connection through the ocean. During the last glacial period, these links resulted in abrupt climatic changes - and could so again in future. In a study just published in the journal "Nature", an international team of researchers describes how an ocean current repeatedly strengthening and weakening again 60,000 to 12,000 years ago led to an extremely sudden change in the climate.
History / Archeology - Earth Sciences - 26.11.2018

Even the ancient Romans were polluters
"We are polluting the rivers and the natural elements, and even ruining the very thing that is essential to life - the air." These words were not spoken by nature conservationists in the 21st century but flowed from the pen of the Roman scholar Pliny the Elder. In fact ancient history researchers agree today that even in Roman times the environment was being polluted - by unfiltered wastewater, the mining of metals such as iron or lead and clear-cutting of the forests.
Earth Sciences - 11.10.2018

Sediment bypass tunnels and biodiversity
Mountain rivers swollen by heavy rainfall deposit large amounts of sediment in reservoirs. To prevent the loss of storage capacity, some reservoirs are equipped with bypass tunnels which convey sediment-laden waters to downstream reaches. The fact that such tunnels offer ecological benefits as well as economic advantages was shown, for example, by a study carried out on the Solis reservoir in Graubünden.
Earth Sciences - Environment - 06.08.2018

Earthquakes can be attenuated by groundwater
Researchers from EPFL and the Ecole Normale Supérieure in Paris have found that the presence of pressurized fluid in surrounding rock can reduce the intensity of earthquakes triggered by underground human activities like geothermal energy production. Around 100,000 earthquakes are recorded worldwide every year, but not all are naturally occurring.
Environment - Earth Sciences - 06.08.2018

Tainted idyll: groundwater over-fertilising lagoon in Spain
Lagoons are valuable natural habitats as well as being good for tourism. In the case of the "Mar Menor" in the Spanish province of Murcia, however, such large quantities of nutrients are entering the unique ecosystem via the groundwater that algal blooms are making swimming impossible. Working together with Eawag, Spanish researchers have been modelling the underground water flows in order to develop better cultivation and water management scenarios.
Environment - Earth Sciences - 25.06.2018

Striking the right balance between wind energy and biodiversity
EPFL researchers have developed a simulator that can calculate the performance of wind farms over 30 years while also factoring in the need to preserve local biodiversity. Tested at a site in the Carpathian Mountains in Romania, the simulator could be applied to the Swiss Jura region, which has a similar landscape.
Astronomy / Space Science - Earth Sciences - 03.05.2018 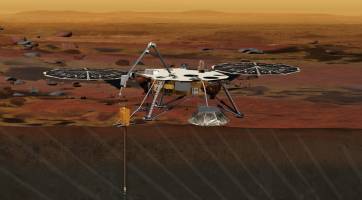 Rumblings deep down in Mars
On 5 May the lander 'InSight' will commence its journey to Mars from California. Its aim is to gather data to enable a better understanding of the formation and evolution of the Red Planet. One of the key instruments on the NASA mission is a seismometer, which was developed and built under the lead of France together with Germany, Switzerland, the UK and the USA.
Earth Sciences - Environment - 30.04.2018