Arsenic and manganese contamination in Amazonia groundwater
Faced with polluted river water, rural communities or aid agencies often drill groundwater wells to obtain water supplies. But data collected systematically for the first time in the Amazon basin show that this "solution" can create new problems: the groundwater may contain elevated concentrations of arsenic, manganese and aluminium - up to 70 times over the recommended limit in the case of arsenic, and up to 15 times for manganese.
Environment - Earth Sciences - 14.03.2018

Climate change drives mountain hares to higher altitudes
A warming climate will shrink and fragment mountain hare habitat in the Swiss Alps. Populations are likely to decline as a result, concludes an international study led by the University of Bern and the Swiss Federal Institute for Forest, Snow and Landscape Research (WSL). Specialised species like the mountain hare, adapted to life at high altitudes, are particularly affected by climate change.
Astronomy / Space Science - Earth Sciences - 07.03.2018

University of Basel tests camera for Mars rover
In 2020, the European Space Agency (ESA) is sending a rover into space to examine the surface of Mars for signs of life. Its on-board equipment includes a high-resolution camera developed in Switzerland, and researchers from the University of Basel are currently testing the camera's operation in an artificial Martian landscape.
Environment - Earth Sciences - 05.03.2018

Sacrificing ground floors can save lives
Disasters like tsunamis, hurricanes and dam failures are rare but can have devastating consequences on a country. A thesis at EPFL has shown that appropriate construction methods can substantially reduce the impact of such catastrophic events. Davide Wüthrich, a PhD student at EPFL, has just finished his thesis on methods for reducing the damage caused when a wave hits a building.
Earth Sciences - 01.02.2018

Evolution of Alpine landscape recorded by sedimentary rocks
Rock avalanches and torrents started to form V-shaped valleys in the Alps approximately 25 million years ago. This landscape contrasts to the flat and hilly scenery, which characterized the Alps a few millions of years before. Geologists from the University of Bern applied digital technologies to unravel these changes in landscape evolution.
Environment - Earth Sciences - 24.11.2017

Are our lakes on the brink of suffocation?
In order to gain insight into how lakes breathe, EPFL scientists have studied oxygen depletion in the depths of Lake Geneva - the first time such research has been carried out. By collecting key data, they were able to enhance their understanding of the lake's ecosystem and how it is likely to evolve over time.
Earth Sciences - Environment - 26.10.2017

The oceans were colder than we thought
A team of EPFL and European researchers has discovered a flaw in the way past ocean temperatures have been estimated up to now. Their findings could mean that the current period of climate change is unparalleled over the last 100 million years. According to the methodology widely used by the scientific community, the temperature of the ocean depths and that of the surface of the polar ocean 100 million years ago were around 15 degrees higher than current readings.
Environment - Earth Sciences - 19.10.2017

Hydroelectric power plants have to be adapted for climate change
Of all the electricity produced in Switzerland, 56% comes from hydropower. The life span of hydroelectric plants, which are massive and expensive to build and maintain, is measured in decades, yet the rivers and streams they depend on and the surrounding environment are ever-changing.
Earth Sciences - 05.10.2017 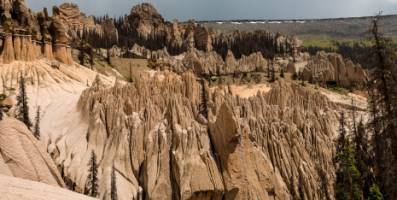 Magma chambers have a sponge-like structure
ETH researchers show that magma chambers under supervolcanoes are more like soggy sponges than reservoirs of molten rock.
Earth Sciences - 10.05.2017

Earth is bombarded at random
Asteroids don't hit our planet at regular intervals, as was previously thought. Earth scientists have reached this conclusion after analysing impact craters formed in the last 500 million years, concentrating on precisely dated events. Do mass extinctions, like the fall of the dinosaurs, and the formation of large impact craters on Earth occur together at regular intervals? 'This question has been under discussion for more than thirty years now,' says Matthias Meier from ETH Zurich's Institute of Geochemistry and Petrology.
Earth Sciences - Materials Science - 03.03.2017

Snow and Sand Erosion Explained
Scientists at EPFL and SLF describe with precision how snow and sand surfaces erode when exposed to wind. Their description can contribute to better predictions of dust emissions from deserts and snow transport in Antarctica, and can be adapted to other planets. Wind and water transport a multitude of particles with them, leading to erosion or deposits, like dust emissions from the Saharan desert that can reach Europe and snow transport that can...
Environment - Earth Sciences - 09.01.2017

Mapping the urban underground
An EPFL researcher has taken a methodology designed to improve underground urban planning around the world one step further.
Earth Sciences - 02.01.2017

Blackouts and other disasters
Timothy Prior and Florian Roth of the 'risk and resilience' team at the Center for Security Studies (CSS) will be appearing as experts on today's SRF theme day on blackouts.
Environment - Earth Sciences - 15.11.2016

Antarctic Snowscapes for Predicting the Weather
EPFL scientists measured for the first time - at centimeter resolutions - how the snowscape of Antarctic ice in the sea changed, before and after a blizzard. This data will help build better weather models for the South Pole and the world's climate. EPFL scientists provided the first detailed measurements of how a blizzard affects snow cover on an Antarctic ice floe.
Paleontology - Earth Sciences - 04.11.2016

Herbivorous mammals have bigger bellies
The researchers have studied the shape of the ribcage in more than 120 tetrapods - from prehistoric times up to the present day. (Image: UZH) What do enormous dinosaurs have in common with tiny shrews' They are both four-legged vertebrates, otherwise known as tetrapods. In the course of evolution, tetrapods developed various body shapes and sizes - from the mouse to the dinosaur - to adapt to different environments.
« Previous 1 4 5 6 7 8 9 Next »