Physics - Aug 14
Aleksandra Radenovic, from the Balkans to Lake Geneva

Health - Aug 12
Coronavirus: Large-scale events to be permitted from October under strict conditions and with a permit
Health - Aug 12
"Imparting knowledge is not enough"

Environment - Aug 11
Florian Breider: a passion for all things Japanese 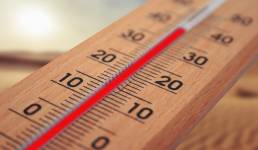 Magma chambers have a sponge-like structure
ETH researchers show that magma chambers under supervolcanoes are more like soggy sponges than reservoirs of molten rock.
Earth Sciences - 10.05.2017

Earth is bombarded at random
Asteroids don't hit our planet at regular intervals, as was previously thought. Earth scientists have reached this conclusion after analysing impact craters formed in the last 500 million years, concentrating on precisely dated events. Do mass extinctions, like the fall of the dinosaurs, and the formation of large impact craters on Earth occur together at regular intervals? ‘This question has been under discussion for more than thirty years now,' says Matthias Meier from ETH Zurich's Institute of Geochemistry and Petrology.
Earth Sciences - Materials Science - 03.03.2017

Snow and Sand Erosion Explained
Scientists at EPFL and SLF describe with precision how snow and sand surfaces erode when exposed to wind. Their description can contribute to better predictions of dust emissions from deserts and snow transport in Antarctica, and can be adapted to other planets. Wind and water transport a multitude of particles with them, leading to erosion or deposits, like dust emissions from the Saharan desert that can reach Europe and snow transport that can...
Environment - Earth Sciences - 09.01.2017

Mapping the urban underground
An EPFL researcher has taken a methodology designed to improve underground urban planning around the world one step further.
Earth Sciences - 02.01.2017

Blackouts and other disasters
Timothy Prior and Florian Roth of the ‘risk and resilience' team at the Center for Security Studies (CSS) will be appearing as experts on today's SRF theme day on blackouts.
Environment - Earth Sciences - 15.11.2016

Antarctic Snowscapes for Predicting the Weather
EPFL scientists measured for the first time - at centimeter resolutions - how the snowscape of Antarctic ice in the sea changed, before and after a blizzard. This data will help build better weather models for the South Pole and the world's climate. EPFL scientists provided the first detailed measurements of how a blizzard affects snow cover on an Antarctic ice floe.
Paleontology - Earth Sciences - 04.11.2016

Herbivorous mammals have bigger bellies
The researchers have studied the shape of the ribcage in more than 120 tetrapods - from prehistoric times up to the present day. (Image: UZH) What do enormous dinosaurs have in common with tiny shrews' They are both four-legged vertebrates, otherwise known as tetrapods. In the course of evolution, tetrapods developed various body shapes and sizes - from the mouse to the dinosaur - to adapt to different environments.
Earth Sciences - Environment - 16.06.2016

Global ethane concentrations rising
Measurements at 49 sites all over the world show that, since 2010, long-declining global atmospheric ethane concentrations are on the uptick again in the Northern Hemisphere. The new study by an international team of researchers concluded that the rise was most likely largely due to greater oil and gas production in the US.
Earth Sciences - Physics - 13.04.2016

Bubbles lead to disaster
Why are volcanologists interested in vapour bubbles? Because they can accumulate in a magma reservoir underneath a volcano, priming it to explode.
Environment - Earth Sciences - 22.03.2016

Monitoring greenhouse gas emissions independently
Mistakes can happen when estimating emissions of greenhouse gases such as carbon dioxide and methane. Researchers funded by the Swiss National Science Foundation have developed a method to independently validate national statistics. The signatory countries of the Kyoto Protocol and the new Paris Agreement have committed to reduce global warming.
Astronomy / Space Science - Earth Sciences - 14.03.2016

A Swiss camera is going to Mars
14.03.16 - The Trace Gas Orbiter, which will search for traces of biological life on the red planet, was launched into space this morning.
Environment - Earth Sciences - 09.02.2016

Traces of life discovered in mantle rock
An international expedition, led by ETH Professor Gretchen Bernasconi-Green, has discovered traces of life in a core sample. The geologist explains what this means. An international team of scientists returned last December from an IODP (International Ocean Discovery Program) expedition to the Atlantis Massif in the Atlantic Ocean.
Earth Sciences - Astronomy / Space Science - 08.02.2016

Migration routes of mantle plumes discovererd
Mars's southern hemisphere has a tumultuous past that was marked by significant volcanism. Now an ETH researcher has discovered that these many volcanoes are not distributed randomly but in fact lie along specific lines. These could well correspond to different paths taken by mantle plumes. Planetary scientist Giovanni Leone at ETH Zurich's Institute of Geophysics has lost count of the hours he has spent poring over high-resolution satellite images to study structures on the surface of Mars.
Environment - Earth Sciences - 01.02.2016

Topography shapes biodiversity, and not only through temperature
A warming climate is likely to drive species to higher, cooler altitudes. A new study highlights a less obvious, yet crucial way in which their new habitat could differ from the one they leave behind. Mountains are home to many living species, with biodiversity typically peaking at mid-altitudes. Scientists have long struggled to explain why this is the case, invoking factors such as low temperatures at high elevations or human disturbance further down.
Earth Sciences - Electroengineering - 11.12.2015

Plate tectonics thanks to plumes?
It is common knowledge that the Earth's rigid upper layer called lithosphere is composed of moving plates. But just what mechanism first set plate tectonics into motion still remains a mystery. A team of researchers led by ETH professor Taras Gerya has now come up with one possible answer by using simulations.
« Previous 1 2 3 4 5 Next »

Physics - Aug 14
Aleksandra Radenovic, from the Balkans to Lake Geneva

Health - Aug 12
Coronavirus: Large-scale events to be permitted from October under strict conditions and with a permit
Health - Aug 12
"Imparting knowledge is not enough"

Environment - Aug 11
Florian Breider: a passion for all things Japanese