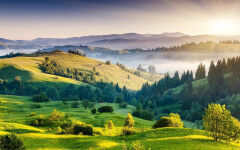 Scientists overcome a hurdle on the path to renewable-energy storage
Scientists have observed how catalysts behave at the particle level during water electrolysis. Catalysts play a crucial role in this reaction, in which water splits into hydrogen and oxygen. By shedding light on the underlying mechanism of the functional role of catalysts during the reaction, the scientists have made an important discovery for the design of renewable-energy storage systems.
Health - Physics - 13.01.2022

The unexpected benefits of fat in type 2 diabetes
Scientists from the University of Geneva have discovered that fat may help the pancreas adapt to excess sugar, thereby slowing down the onset of diabetes. With nearly 10% of the world's population affected, type 2 diabetes is a major public health issue. An excessively sedentary lifestyle and a too-caloric diet encourage the development of this metabolic disease by altering the functioning of pancreatic cells and making blood sugar regulation less effective.
Chemistry - Physics - 11.01.2022
Increasing efficiency in artificial photosynthesis
Chemical engineers at EPFL have developed a new approach to artificial photosynthesis, a method for harvesting solar energy that produces hydrogen as a clean fuel from water. -Artificial photosynthesis is the holy grail of all chemists,- says Astrid Olaya, a chemical engineer at EPFL's Institute of Chemical Sciences and Engineering (ISIC).
Physics - 07.01.2022

An optical chip improved by light
At EPFL, a team of scientists created and observed a new physical phenomenon on an optical chip using modified lights. Technology is increasingly moving towards miniaturization and energy efficiency. This also applies to electronic chips. Light, and optics more broadly, are functional in making compact and portable chips.
Computer Science - Physics - 06.01.2022

More insight into how vision works
PSI scientists have shed light on an important component of the eye: a protein in the rod cells of the retina which helps us see in dim light. Acting as an ion channel in the cell membrane, the protein is responsible for relaying the optical signal from the eye to the brain. If a genetic disorder disrupts the molecular function in a person, they will go blind.
Physics - Chemistry - 23.12.2021

How do our organs know when to stop growing?
A multidisciplinary team led by researchers from the University of Geneva and MPIPKS has solved with a mathematical equation the mystery of how an organ changes its size depending on the size of the animal. The smallest fish in the world, the Paedocypris, measures only 7 millimeters. This is nothing compared to the 9 meters of the whale shark.
Physics - Materials Science - 22.12.2021

Plastic snowfall in the Alps
In a large-scale fundraising campaign, popular YouTubers like Mister Beast and Mark Rober are currently trying to rid the oceans of almost 14,000 tonnes of plastic waste. That's about 0.15 per cent of the amount that ends up in the oceans every year. But it's not just our waters that are full of plastic.
Physics - Chemistry - 03.12.2021

Molecular device turns infrared into visible light
Researchers at EPFL, China, Spain and the Netherlands have built a micro-device that uses vibrating molecules to transform invisible mid-infrared light into visible light. The breakthrough ushers in a new class of compact sensors for thermal imaging and chemical or biological analysis. Image: Artistic view of the nanoparticle-in-groove plasmonic cavities.
Physics - Electroengineering - 30.11.2021

Quantum physics across dimensions: Unidirectional Kondo Scattering
An international team led by scientists, has unveiled a unique quantum-mechanical interaction between electrons and topological defects in layered materials that has only been observed in engineered atomic thin layers. The phenomenon can be reproduced by the native defects of lab grown large crystals, making future investigation of Kondo systems and quantum electronic devices more accessible.
Health - Physics - 25.11.2021

Proton therapy: a success story that started 25 years ago
On 25 November 1996, the Center for Proton Therapy at the Paul Scherrer Institute PSI treated a cancer patient using the spot-scanning technique for the very first time - a world premiere. This technique developed at PSI scans and irradiates deep-seated tumours with a pencil-thin beam of charged particles, killing cancer cells with extreme precision while preserving the surrounding healthy tissue.
Physics - Materials Science - 10.11.2021

New imaging method gives live glimpse into how cells work
By combining two microscopy methods, researchers are able to see what is happening inside a cell and on its membrane simultaneously, giving unprecedented insight into the cellular processes that occur during infection, for example. Cells are the fundamental component of living organisms and play host to a number of complex biological phenomena.
Earth Sciences - Physics - 10.11.2021

Crushed resistance
Geophysicists can use a new model to explain the behaviour of a tectonic plate sinking into a subduction zone in the Earth's mantle: the plate becomes weak and thus more deformable when mineral grains on its underside are shrunk in size. The Earth's surface consists of a few large plates and numerous smaller ones that are continuously moving either away from or towards each other at an extremely slow pace.
Mathematics - Physics - 04.11.2021

Securing data transfers with relativity
A team from the University of Geneva has implemented a new way to secure data transfers based on the physical principle of relativity. The volume of data transferred is constantly increasing, but the absolute security of these exchanges cannot be guaranteed, as shown by cases of hacking frequently reported in the news.
Physics - 20.10.2021

Ultrafast control of quantum materials
An international team with participation of the Paul Scherrer Institute PSI shows how light can fundamentally change the properties of solids and how these effects can be used for future applications. The researchers summarise their progress in this field, which is based among other things on experiments that can also be carried out at the Swiss X-ray free-electron laser SwissFEL, in the scientific journal Reviews of Modern Physics .
Physics - Materials Science - 14.10.2021

Exotic magnetic states in miniature dimensions
Led by scientists at Empa and the International Iberian Nanotechnology Laboratory, an international team of researchers from Switzerland, Portugal, Germany, and Spain have succeeded in building carbon-based quantum spin chains, where they captured the emergence of one of the cornerstone models of quantum magnetism first proposed by the 2016 Nobel laureate F. D.
Astronomy / Space Science - Physics - 14.10.2021

The planet does not fall far from the star
A compositional link between planets and their respective host star has long been assumed in astronomy. For the first time now, a team of scientists, with the participation of researchers of the National Centre of Competence in Research (NCCR) PlanetS from the University of Bern and the University of Zürich, deliver empirical evidence to support the assumption - and partly contradict it at the same time.
1 2 3 4 5 ... 27 Next »