A Heating System with a Brain
A start-up company is putting on the market a thermal regulator that uses neural networks to learn about your house as the seasons change, allowing for savings of up to 65% on fuel.
Innovation - 22.02.2012

Fiber Optics in Computer Screens
A single fiber-optic can light up computer screens. This innovation put in place by a spin-off, brings energy savings of 30% while boosting processors.
Innovation - 01.02.2012

Swimming goes high tech
Scientists have developed inertial systems, worn in a full-body swimming suit, which can analyse the strengths and weaknesses of elite-level swimmers during workout sessions. It's a revolutionary new tool for coaches. Will scientists play a role in creating the next Michael Phelps or Laure Manaudou? Researchers from EPFL and University of Lausanne have at least taken the first step, by developing a tool that can help improve elite swimmers' workouts.
Materials Science - Innovation - 16.11.2011 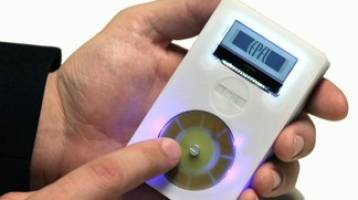 Touchscreen with texture
Researchers have invented a new generation of tactile surfaces with relief effects - users can feel actual raised keys under their fingers.
Innovation - 15.11.2011

The apple doesnt fall far from the tree - or does it?
Research has shown that contrary to what was thought from previous studies, spin-outs don't systematically set up shop near their parent companies. To stay or to leave, what's the best strategy? "I was really surprised, when doing this research, to find that 50% of spin-outs don't necessarily establish themselves near the parent company," observes Christopher Tucci from EPFL.
Innovation - 14.06.2011

From a Bachelor’s project to the top of the charts
Aelios is an application that was developed by Bachelor students. Two weeks after its launch, it topped download charts in Switzerland and Germany.
Computer Science - Innovation - 28.02.2011

Supercomputers with the size of sugar cubes
Energy consumption poses a critical challenge in the development of next-generation supercomputers and IT systems.
« Previous 1 6 7 8 9 10