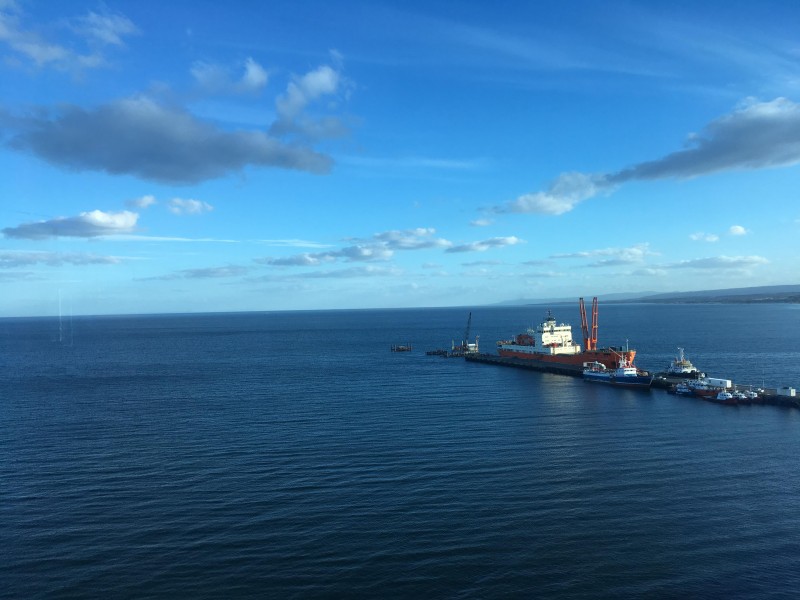 The ACE expedition has arrived in Chile. This marks the end of its second leg, during which the researchers made a stop on Antarctica, explored little-known ecosystems using a remote-controlled submersible and visited relatively uncharted territory. The third leg of the expedition, featuring stops on three remote islands, will get under way on Sunday.

The Akademik Treshnikov, the Russian research ship carrying the Antarctic Circumnavigation Expedition (ACE), is now docked in Punta Arenas, Chile, some 13,000 kilometers from Switzerland. The ship’s arrival in this small city, at the southern tip of South America, marked the end of the expedition’s second leg. The Treshnikov left Cape Town, South Africa at the end of December on a 90-day voyage around Antarctica. The ship is carrying 50 international researchers who are conducting 22 research projects.

The second leg of the journey, which began on 22 January in Hobart, Australia, was action-packed and filled with scientific discoveries. It’s the only leg with a stop on the continent itself, on the Mertz Glacier. This glacier lies to the east of Antarctica, and its tongue reaches into the Southern Ocean - where an 80-kilometer-long chunk of ice broke off in 2010.

While some teams took ice cores on top of the glacier in order to find out more about our climate’s history (owing to the presence of gases and other particles), others had a look at the glacier’s underbelly. Operating a submersible equipped with cameras and robotic arms, the researchers saw what was hidden below the glacier tongue and collected various samples. By analyzing these organisms - sponges, plankton, brittle stars and krill, to name just a few - scientists hope to learn more about how these ecosystems evolve and adapt to climate change.

The researchers also ventured onto several totally uninhabited islands, including the Balleny Islands and tiny Scott Island, where they took numerous samples and conducted both cartographical and ornithological surveys.

All did not go as planned during this leg, however. The scheduled stop on Macquarie Island was cancelled because of a storm, and the visit to Peter I Island had to be cut short. To make up for this, an impromptu stop was made on Siple Island, a volcanic island located close to the continent and partly embedded in its ice. This island is rarely visited and not well documented, which made the measurements and samples taken there even more valuable.

The Treshnikov reached Punta Arenas on Wednesday and will head back to sea tomorrow for the third and final leg of the expedition. The submersible is no longer on board, and there are no plans to stop on the continent. Most of the projects will nevertheless continue: visits to three subantarctic islands will give the researchers plenty of opportunities to take both ocean and land measurements.

The first island, South Georgia, is the largest of the three to be visited. This mountainous island is a British territory. The second island is actually a group of volcanic islands: the Sandwich Islands. The flora and fauna on these two sites are of significant scientific interest, and these islands are important nesting grounds for many bird species.

The third stop will be on Bouvet Island, a Norwegian dependency. This 50-square-kilometer island, entirely covered in ice, is one of the most remote places on earth. It is inhabited by elephant and other seals, birds and penguins and can only be reached by helicopter.

On 19 March, the ACE expedition will reach Cape Town, completing its trip around Antarctica. But the work will not stop there. A recap of the expedition and preliminary scientific results will be presented to the press the following day. And other, more extensive results will be discussed in conferences throughout the year.

Keep up with the expedition on spi-ace-expedition.ch.

Special envoy in the heart of the action

EPFL’s communications team jumped at the chance to send one of its journalists to join the expedition at the edge of the world. Sarah Perrin, who wrote the article above, left on Tuesday for Punta Arenas, Chile. Equipped with a notebook, camera and motion sickness pills, she will report back on how the researchers and crew members spend their time during the three weeks of the expedition’s final leg. Her articles and reports will generally reach us at night, since electronic communications on board the Treshnikov are reserved for scientific work during the day.

We’re looking forward to reading about Sarah‘s Antarctic adventures in near real time ’ and we’re excited to be able to share them with you through the spi-ace-expedition.ch blog and on both the ACE expedition and EPFL’s social media channels.

What seismic waves reveal about Martian crust - 27.10
This site uses cookies and analysis tools to improve the usability of the site. More information. |