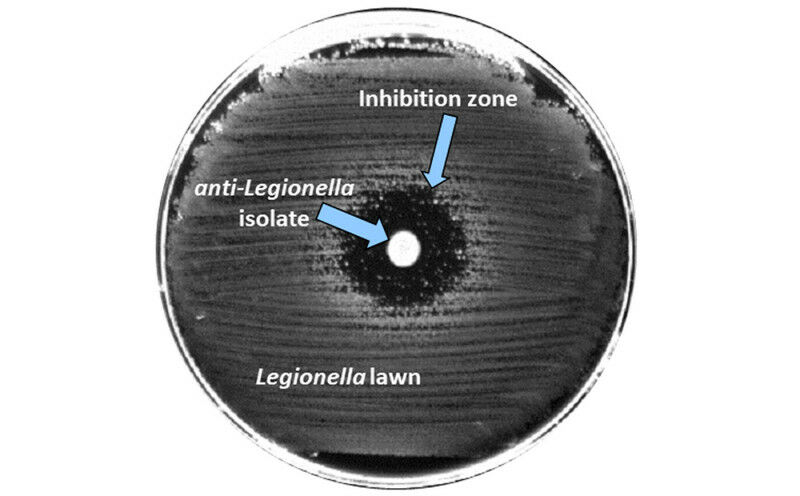 If bacteria succeed in pushing back the Legionella with toxic compounds, an inhibition zone forms in the Legionella lawn around the bacterial colony. (Picture: Eawag)

Throughout Switzerland, infections with bacteria of the genus Legionella are increasing significantly. Researchers at Eawag have now outlined how the growth of these microbial inhabitants of drinking water systems could be curbed with the help of other organisms.

Legionella are bacteria that live in water and can be found in many water pipes, shower heads, ventilation systems, boilers and cooling towers. They can sometimes also infect people if they enter the respiratory tract through fine water droplets - for example when showering - and trigger legionellosis. However, there is no need for alarmism, since legionellosis is usually mild. The so-called Pontiac fever is similar to a flu.

Nonetheless, especially in immunocompromised people, the bacteria can also trigger a type of pneumonia that is sometimes fatal (known as Legionnaires’ disease). Legionellosis is still rare, even though the number of cases has doubled in the last ten years to about 600 annual infections throughout Switzerland. "This increase is a cause for concern," says Alessio Cavallaro, a doctoral candidate in the Drinking Water Microbiology Group led by Frederik Hammes.

Cavallaro and his colleagues have just published a review article on the probiotic control of Legionella (*). "We define ’probiotic’ as the targeted addition of harmless microorganisms to change the microbial composition of the system - and to inhibit the growth of pathogens," the researchers write in their paper. Wait, microbes in drinking water that is regularly tested by the authorities for "bacteriological safety"

Cavallaro laughs: "As microbiologists, we know there is no such thing as a sterile environment," he says. "In drinking water, there is a community of organisms that is quite rich in species." These diverse organisms colonise the pipes - and form biofilms on the pipe walls. The ecological interactions between the microorganisms are almost as diverse as the composition of species in the biofilm. It is precisely here, in this slippery realm, that Legionella are at home. "This microbe is not an external contaminant, but part of the natural microbiome in the water pipes," says Hammes.

The life cycle of Legionella can be divided into two phases. In conjunction with other bacteria, the Legionella participate in building up the biofilm, where they mainly persist until they are absorbed by an amoeba or another unicellular organism. Thanks to a trick (the molecular details of which have now been unravelled), some Legionella do not end up as food, but set themselves up in their own compartment of the host cell, where the second phase of their life cycle eventually begins.

Inside their host cell, the Legionella are not only protected from heat and chemical toxins. They also find all the organic substances they need to reproduce. "In this respect, Legionella are quite picky. For example, they depend on many amino acids that they cannot synthesise by themselves," says Cavallaro. The reproduction and multiplication phase ends when the host cell bursts - and the many new Legionella have to find a niche in the biofilm once again.

Using interactions in the complexity of the microbiological realm

In their paper, the researchers report how this life cycle could be interrupted. For example, if the protozoa are already infected with other bacteria, the Legionella have a harder time multiplying inside the cell because they have to share the valuable resources of the host cell with the other invaders. Other approaches are also mentioned in the review article. In France, for example, a company is evaluating special amoebae that apparently do not fall for the Legionella trick - and actually eat them instead of letting them multiply inside themselves. However, "independent scientific evidence for the effectiveness of this approach is still limited," Cavallaro and Hammes caution.

In their own work, the researchers are focusing for the time being on another aspect of the microbiological realm: the ability of many bacteria to produce toxic compounds - such as antibiotics - that inhibit the growth of their competitors, which plays an important role in biofilms. For their investigations, the scientists inoculate various bacteria onto culture plates colonised by Legionella in the laboratory. Where a transparent zone forms around the droplet over time, the other microbes have succeeded in inhibiting the growth of Legionella.

"We hope to be able to derive measures to control the growth of Legionella from such findings on ecological interactions," says Hammes. For now, however, this is still a distant prospect. At present, probiotic strategies are still a long way from actual application in drinking water systems. The approaches that are proving promising on the bacterial culture plates must be tested step by step, first in larger jars and then in pilot drinking water systems.

Nevertheless, the researchers are already thinking about the public acceptance of their work. "Effective communication is needed to make it clear that it is not about ridding the drinking water systems of bacteria, because that is impossible," says Hammes. "Rather, the intention of probiotic approaches is to specifically change the nature of bacterial communities."