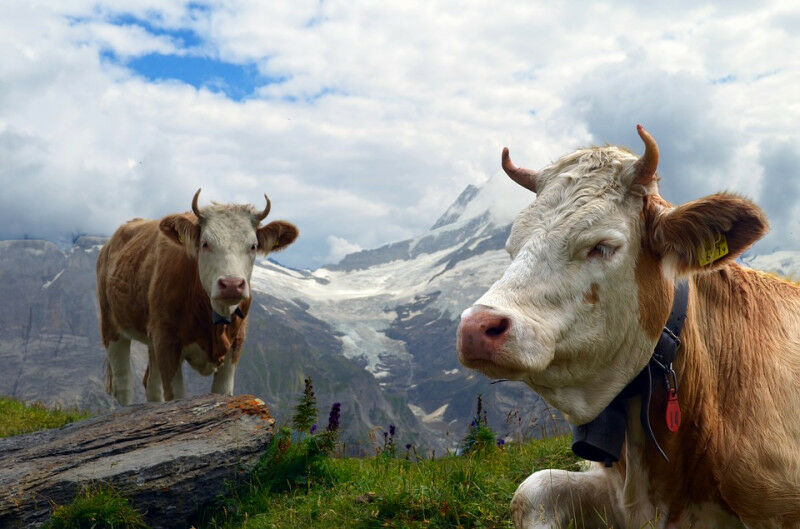 Making agriculture climate-neutral has a high cost - which some rich countries might be willing to accept, ETH Zurich researchers find.

Emissions of methane and nitrogen oxides from agriculture are Europe’s second most important contributor to climate change, after CO2 emissions from burning fossil fuels. Experts have suggested that these emissions need to fall dramatically if the goal of limiting global warming to 1.5°C, as specified in the Paris Agreement on climate change, is to be reached.

Technological options to mitigate these emissions are limited and costly. Meeting ambitious climate targets thus likely requires reducing the consumption of emissions-intensive products, such as meat, dairy, and rice. Yet, changing consumers’ behaviour can be difficult as well, and there’s no sign that governments are willing to force them.

The ETH Zurich environmental scientists Nicoletta Brazzola, Jan Wohland, and Anthony Patt looked at the problem from a different perspective. If mitigating agricultural emissions fails, how much CO2 would have to be actively removed from the atmosphere in order to compensate for those emissions, what would it cost, and what would this do the price of affected foods like beef, milk, and rice?

"Whether or not the answers are reassuring depends on where you live," says Anthony Patt, a co-author. "In countries where meat and dairy products are already quite expensive, such as our home of Switzerland, it would add roughly 10 percent to the price of beef to fully compensate for its effects on the climate, and roughly 5 percent to the price of milk." While this may seem like a reasonable price to pay, the story is different in developing countries, where making these foods climate-compatible would more than double their costs.

To calculate these numbers, Brazzola and her colleagues started with a climate model to calculate the rate of CO2 sequestration - removing it from the atmosphere and permanently storing it underground - needed in order to hold warming to the 1.5-2°C target, even as agricultural emissions of methane and nitrous oxide remain constant or rise over time.

The study authors then assessed the cost of the offset using a mix of different carbon-removal technologies. The most cost-effective ways involve planting trees and capturing the carbon emissions from bio-energy, but both are limited by land availability and it is likely that society would soon have to turn to more expensive processes that involve chemically filtering CO2 from the air and depositing it underground. Fortunately, these technical options are projected to become cheaper as their use expands.

To then translate these costs into price changes for agricultural commodities, the study authors accounted for the emissions specific to each commodity, as well as those commodities’ prices both globally and in certain countries.

"At a global level, both the total amount of CO2 offsetting required, and the money it would take to do this, appear astronomical. To get a better idea of whether this approach is realistic, we looked at the cost for individual people by analysing the change in food prices," said Brazzola. "Low-income countries, where people spend most of their income on food, would be the most affected by a large-scale deployment of carbon removal. This would heavily impact their food security and welfare. But in certain high-income countries, where overconsumption of emissions-intensive products is an issue, this approach could facilitate a transition towards more sustainable diets."

For Europeans, these costs may be manageable, and adding them to the price of the affected foods would also have the additional benefit of reducing demand for meat and dairy, thereby lessening the scale of the overall problem. Yet while adding €2 to the price of a kilogram of beef that already costs €20 may be politically acceptable, the same €2 price increase may be seen as exorbitant in countries where the base price for beef is under €5 per kilogram, and people’s available income is commensurately lower.

"I don’t think this would be a realistic option in many developing countries , especially where food security is concern - I can’t imagine that politicians there would be willing to more than double consumer prices on these foods. We will have to search for other options," said Patt. "There is certainly more work to do, either finding ways to reduce these emissions through dietary changes, finding substitutes for meat, or coming up with alternative ways to finance the CO2 offsetting."