ERC Grants for Research at UZH 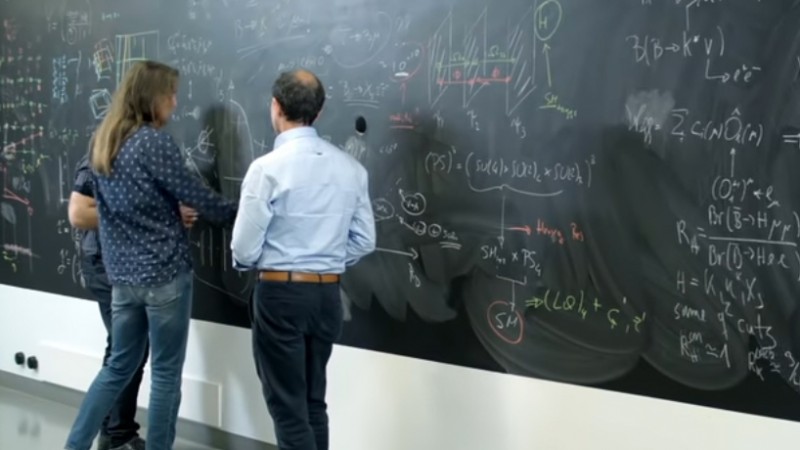 In his research Gino Isidori is investigating a mystery of elementary particle physics. (Bild UZH)

Three researchers at the University of Zurich have received an ERC Advanced Grant. A physicist, a mathematician and a theologian will each receive up to 2.5 million euros from the European Research Council to continue their research.

The European Union’s lucrative Advanced Grants are awarded to established academics with an outstanding track record. The funding amounts to a maximum of 2.5 million euros over five years and enables the recipients to carry out their research with the freedom they require. Over 2,000 projects from all over Europe were submitted to the European Research Council this year, including 17 from the University of Zurich. Three projects in the areas of physics, mathematics and for the first time also theology have now been awarded ERC Advanced Grants. UZH will receive 6.68 million euros in total.

Mystery of the origin of our existence
Prof. Gino Isidori’s research looks at one of the greatest mysteries in fundamental physics - and thereby the very roots of our existence. The physics professor and his team at UZH observed three families of elementary particles, which are apparently identical but differ in mass. The stability of atomic nuclei, as well as the structure and properties of atoms, strongly depend on the mass of the elementary particles. “We know how to describe such masses within what is known as the standard model of fundamental interactions, but we do not have a rational principle which is able to explain their peculiar values,” explains Isidori. The group will now exploit the potential of high-precision measurements of rare processes, which in the last few years have hinted at deviations from the standard model predictions; in addition, they want to try to find theoretical models for these deviations in order to expand the standard model.

Dynamic properties of quantum-mechanical systems
Benjamin Schlein, professor at the UZH Institute of Mathematics, is tackling one of the key questions of mathematical physics: He researches the macroscopic properties of quantum-mechanical systems consisting of many microscopic particles that observe the fundamental laws of nature. Studying the interactions in such systems is a very challenging problem. Schlein therefore wants to develop new mathematical tools to describe correlations between the interacting particles and to understand their effects on large quantum systems. The long-term goal is to obtain mathematical proof of the emergence of Bose-Einstein condensation and of superconductivity, as well as the validity of the Boltzmann equation for quantum gases.

How did the idea of God as lawgiver arise?
The tenets of Judaism, Christianity and Islam all include the idea of laws that are issued by God. In the last two thousand years, this idea has become politically and religiously entrenched. The research project in comparative cultural studies being carried out by Konrad Schmid, Professor of Hebrew Bible and Ancient Judaism at the Faculty of Theology, looks at the historical background factors that led to the idea of God as a lawgiver. The idea was first formulated in the Torah (the Hebrew Bible). In the context of ancient Near Eastern legal history, it was a completely innovative concept, as laws in the ancient Near East were seen as coming from monarchs, and not from deities.

Using the power of drawing to discern order in nature - 17.06