Function from structure: the double life of a DUB 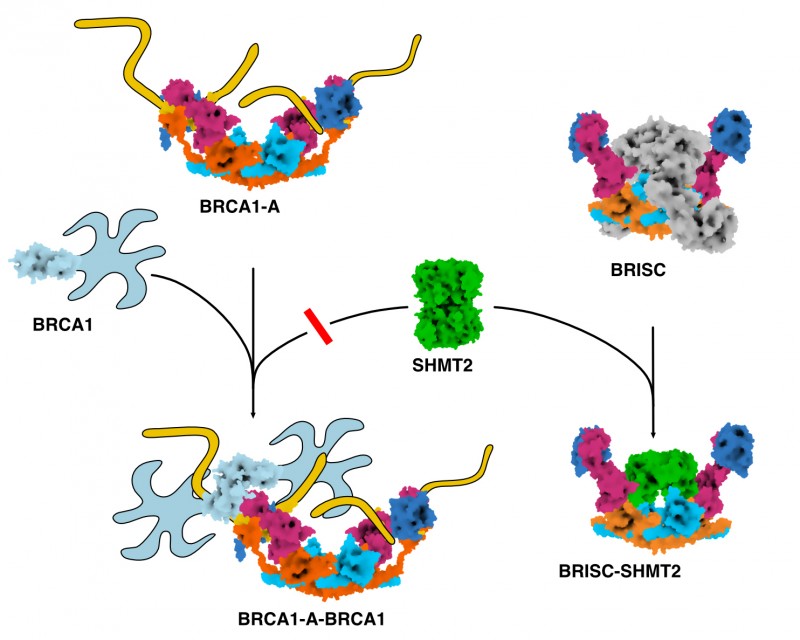 Schematic summary of BRCA1-A and BRISC function. Click to enlarge

Deubiquitinases (DUBs) play a general role removing protein-degrading ubiquitins throughout the cell and are not typically known for specificity. Analyzing the two protein complexes BRISC and BRCA1-A, which have the same DUB core but play different roles in human biology, the Thomä group - in a collaboration with the Novartis Institutes for BioMedical Research (NIBR) - showed that DUBs can have diversified targeting and regulatory functions.

Protein function is modulated by post-translational modifications such as ubiquitination, leading to protein degradation or altering protein cellular location and activity. Ubiquitination can be reverted by DUBs, which are commonly regarded as constantly active enzymes with limited regulatory and targeting specificity.

The multi-protein complexes BRCA1-A and BRISC serve respectively in DNA double-strand break repair (mutations to it are linked to early-onset breast cancer), and immune signaling and cellular stress response. Whereas they have distinct biological functions, the two complexes share the same catalytic subunit: the DUB BRCC36 - albeit with different subunits. With the available data suggesting BRCC36 has a “double-life” with distinct biological functions, Julius Rabl, a postdoc in the Thomä group, and colleagues sought to identify how BRCC36 works.

Using cryogenic electron microscopy (cryo-EM), the researchers determined the structural basis of BRCC36 in the two protein assemblies. They found that in the case of BRCA1-A, BRCC36 helps to sequester and inhibit BRCA1, a tumor suppressor protein, whose dysfunction is tightly linked to development of breast cancer. In the case of BRISC, - which unlike nucleus-bound BRCA1-A is located in the cytoplasm - BRCC36 interacts with the metabolic enzyme SHMT2α, which prevents the BRISC complex of being catalytically active.

This work demonstrates how a near identical deubiquitinase core is functionalized for radically different cellular purposes through different subunits, which ultimately confer targeting and regulation specificity. For Rabl, the findings revealed an unprecedented case of a protein inhibiting a DUB and a rare case of an enzyme inhibiting another enzyme. The study also highlights what breast cancer mutations might be doing, in context of BRCA1-A and BRISC function.

Even natural products can be harmful for the unborn child - 25.05
DNA damage and neurodegenerative diseases: a talk with Claudia Magrin and Martina Sola - 25.05
Related Stories
Health
Switzerland's lockdown has sharply reduced the cases of COVID-19 - 30.05
Farewell to Flora Kessy - 29.05